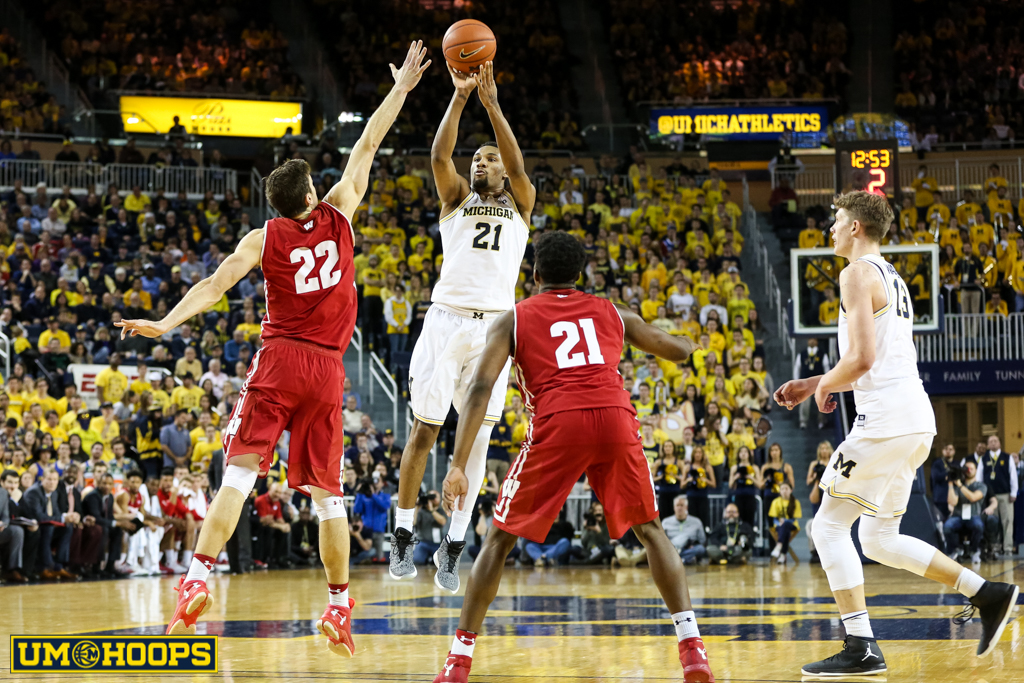 Michigan’s win over Wisconsin on Thursday night looked nothing like a typical Michigan win, it was a Wisconsin-style win that the Wolverines earned.

Beating Wisconsin isn’t supposed to be fun. Wins over Wisconsin aren’t flashy shootouts like you might find on other days, they are grind-it-out 40 minute battles.

Want to beat the Badgers? Dig in, play defense and out work the most consistent team in the Big Ten. Michigan’s win over Wisconsin on Thursday night looked nothing like a typical Michigan win, it was a Wisconsin-style win that the Wolverines earned.

The Wolverines got off to a quick 8-2 start on Thursday night and it looked like just maybe we’d see another home blowout at the Crisler Center. Those dreams didn’t last long as Wisconsin settled into the game.

Zak Showalter took Derrick Walton’s ability to score away, and Ethan Happ played like what he is, one of the league’s best interior scorers. The Wolverines kept themselves in the game with timely three-point shooting and some big time moves by Moritz Wagner, but then opened the second half in a fog.

Coaches, pundits, fans and announcers love to preach about the importance of the first four minutes of the second half — and they aren’t wrong — and it looked like Michigan might throw another game away with how it started the second. The Wolverines turned the ball over and missed four jumpers in just over 2 minutes and found themselves down by 8.

Trailing 38-30 on its home floor with the season on the line, Michigan woke up, locked in and played Wisconsin’s game. The Wolverines allowed 38 points in the first 34 possessions of action, but held the Badgers to just 20 points in their final 28 trips up the floor — including 2-of-18 shooting to close the game.

Michigan won this game with its defense and picked up just enough second half contributions from two players who had been struggling. Zak Irvin snapped out of his slump with a banked in three-pointer at the shot clock buzzer and finished with 18 while senior big man Mark Donnal gave the Wolverines a terrific defensive shift off the bench that helped Michigan hold on.

Michigan’s offense wasn’t great, but Zak Irvin and Moritz Wagner got the job done. The Wolverines managed 1.03 points per possession, which is their third-worst mark in a win this season. The fact that Wisconsin outscored Michigan 36-24 in the paint will probably draw a lot of attention, but the fact is that the Wolverines managed to produce that 2-point scoring and actually outshot Wisconsin 52% to 45% inside the arc.

The story of this game was Michigan’s defense which held Wisconsin to just .93 points per possession. The Badgers shot just 44% inside the arc and 19% inside the arc. There’s no hiding that the Wisconsin offense had been slumping, and losing Bronson Koenig didn’t hurt, but Michigan should feel pretty good about its defensive performance.

Whether they were tactical, emotional or spiritual adjustments — probably a bit of everything — Michigan managed to change this game in the second half.

The Wolverines weren’t going to go down getting schooled by Happ and they were forced the double. The gamble paid off as it became very clear that the Badgers didn’t have the perimeter threats to beat Michigan as Hayes was 3-of-7, Brown was 0-of-5 and D’Mitrik Trice led Wisconsin in shot attempts and was 2-of-15. The double teams also led to unsettled situations and turnovers which jumpstarted Michigan’s offense to some easy points.

While Michigan had a number of sloppy giveaways in the first half, it turned the ball over just two times in the final 19 minutes of the game. Wisconsin’s 6 second half giveaways led to 10 Michigan points and were another key second half correction.

Suddenly there are some signs that this thing is starting to come together for the Wolverines. They’ve held three straight opponents below a point per possession, their best defensive stretch since the six games to open the season. They’ve also outscored Big Ten teams by 6.3 points per 100 possessions, that’s 4th best in the conference — better than Northwestern and Michigan State — and have added another quality bullet point to the resume.

There’s still plenty of season left and now this group has to finish the season with 4 of its last 5 games on the road, but a couple more wins and the Wolverines could have some real momentum headed into the postseason. Next up is a trip to The Barn, a venue where Michigan has fared as well as any Big Ten arena under Beilein. The Gophers are a defense-first team loaded with shotblockers that has won 4 games in a row, but also has shown its fair share of inconsistency.