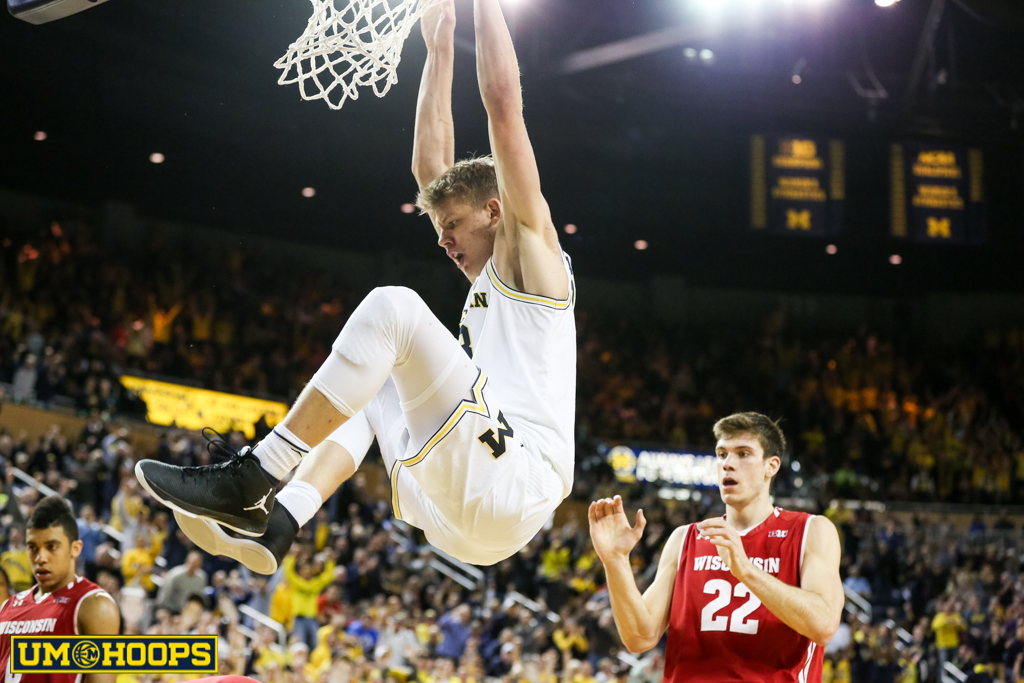 Michigan’s second-half adjustment to double-team Ethan Happ paid off in a statement victory.

To watch Wisconsin forward Ethan Happ play is to step into basketball’s past. In this modern age of big men who can stretch the floor or just as easily beat their defender off the bounce, the 6-foot-10 redshirt sophomore does most, if not all, of his work down low.

Happ has never attempted a 3-pointer and he’s only made two field goals outside of five feet. Instead, he boasts an arsenal of post moves, displaying a light touch and deft footwork. The 11th-ranked Badgers — despite the presence of two seniors in Nigel Hayes and Bronson Koenig who had higher profiles entering the year — are undoubtedly Happ’s team. As he goes, so do they — something that was apparent four days prior to Wisconsin’s meeting with Michigan, when Happ was held to nine points on 3-for-8 shooting with four turnovers in his team’s 66-59 loss to Northwestern at home.

For the first half of Thursday night’s game at Crisler Center, that version of Happ — an outlier — was nowhere to be seen.

The player that is ranked sixth in Ken Pomeroy’s Player of the Year Rankings and will be a consensus All-Big Ten selection? He showed up, and he was having his way with the Wolverines.

Happ contributed on 27 of his team’s 31 first-half points, assisting for nine while scoring 18 on 8-9 shooting. In a two-minute stretch, he managed to single-handedly erase a six-point Michigan lead. First, he blew past freshman center Jon Teske, drawing a foul and knocking down both free throws. Then he stole the ball from Teske at half-court, threw it down for a dunk, and promptly beat Teske two more times on offense, scoring once and drawing a second foul.

It wasn’t just Teske who fell prey to Happ, though. Sophomore forward Moritz Wagner was blown by a couple times, while Happ managed to get loose on a couple cuts, catching the Wolverines napping. Michigan, meanwhile, stuck with its initial defensive gameplan: like in the first game, they would try to guard Happ one-on-one.

“We looked at our numbers last time that we played them,” said Michigan coach John Beilein. “Northwestern just double-teamed him the whole game and it was a point per possession, and when we didn’t double team him last time it was 0.6. So we said we can have it in our package, but we’re not going to do it unless we need it.”

But after Happ’s stellar first half and a 7-0 run from Wisconsin to open the second, it was clear the Wolverines did, in fact, need it. Michigan found itself in danger of getting run out of the building even though Koenig missed the game due to an injury and Hayes was completely ineffective.

Yet things turned around for the Wolverines just as quickly as they had gone south. A few big shots from embattled senior wing Zak Irvin. A four-point play from redshirt sophomore guard Muhammad-Ali Abdur-Rahkman. And most importantly, a complete shutdown of Happ.

And whereas Beilein and Michigan had been hesitant to double Happ for the first 20 minutes — even while he carved up the defense — they were more willing to do so in the second half. Whenever he found himself with the ball, another Wolverine would swarm to him, forcing him to either send it back out to the perimeter or look for the skip pass to the opposite corner.

Sometimes it wasn’t even the double team that did the job. On one occasion, Happ split two defenders only for senior forward Mark Donnal to block him from behind, leading to an Irvin three. On another occasion, Happ had a one-on-one matchup with Irvin but was unable to create any space, leading to a turnover and Michigan fastbreak that ended with Wagner hanging on the rim in jubilation.

And as Happ struggled to just four points on 2-for-4 shooting and three turnovers in the second half, the Wolverines steadily built their lead to earn a crucial win — perhaps their biggest of the season.

We made some adjustments at halftime—kind of doubled him a little bit, kind of faked the double too, just to switch it up for him so we could throw him off rhythm.

“(Happ) got a lot of easy touches in the first half and easy rebounds too, that he was able to get some put-backs,” Irvin said. “We made some adjustments at halftime—kind of doubled him a little bit, kind of faked the double too, just to switch it up for him so we could throw him off rhythm.”

Added Wagner: “When to double is always the question. He’s a really good passer. So I kinda feel like he likes to pass, but that’s the thing. You’ve got to mix it up. You can’t give him the same look every possession, so I think we did a pretty job of that.”

While Michigan isn’t a team known for its ability to get stops, the Wolverines have still managed to carve out some semblance of a defensive identity during this 3-0 stretch that began last Tuesday. Michigan creates turnovers that lead to easy transition buckets — the exact type of play Wisconsin coach Greg Gard bemoaned after the game, calling them “backbreakers.”

Managing to stop Happ’s rampage, though, was a different story. That was a rare case of a second-half adjustment that caught on with the team. Sending more double teams at Happ was a collective effort that required all five players on the court to be perfectly in sync or else risk giving up an open look or easy layup.

It may have been risky, but the alternative —  continuing to allow Happ to work his way to the basket — was much worse. Luckily for the Wolverines, the switch worked to perfection, and it was just another sign that this team may yet have surprises in store for the rest of the conference — and perhaps, the rest of the country.

“This team deserves to have a run like this,” Wagner said. “We’re such a good group. Everybody loves each other, everybody plays for each other, we practice so hard. We’ve been going through a stretch where that didn’t always pay off, and now it pays off. So it just means so much to us that we’re able to have a run right now and win games against really good teams.

“… That’s what I’m most proud about: that we just kept fighting. We know that they’re going to make runs. That’s what good basketball teams do. We just stuck with it, we made plays, we got enough stops — I think there was a four-minute stretch or so when nobody scored. We had that at Indiana too, with just two points in five minutes. I think that’s just hard work. Even when offensively it doesn’t pay off, you just keep guarding defensively and good things will happen.”