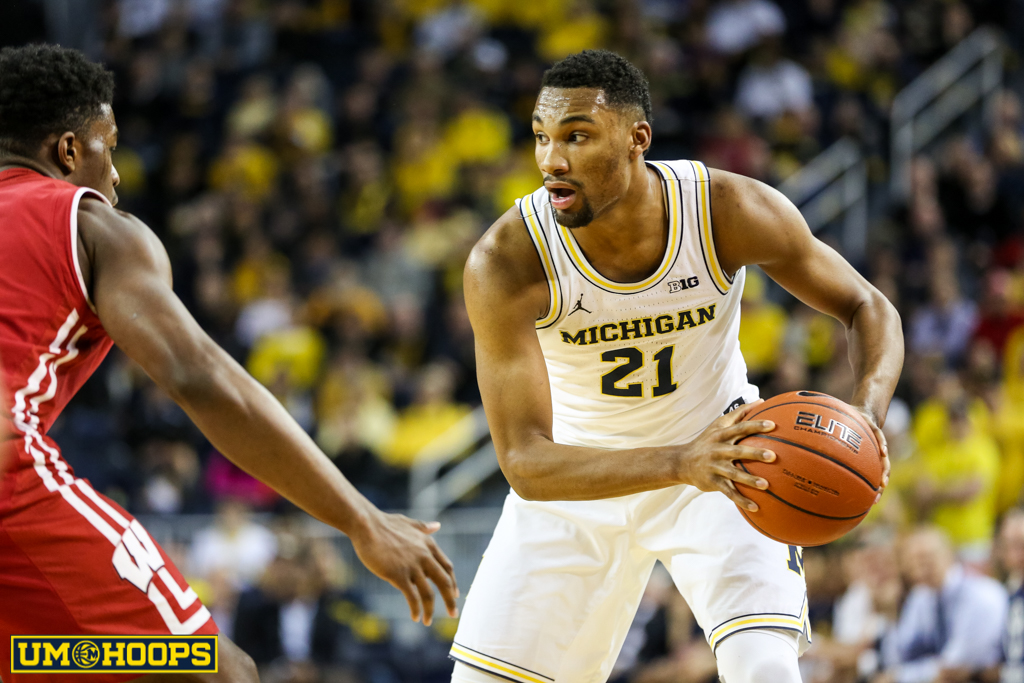 A couple of baskets—one a staple of his game, the other a lucky break—helped the senior get back on track.

Michigan fans had never seen Zak Irvin like this: dejected, uncertain, in his own head. Give credit to the senior for admitting that his recent shooting woes were not due to anything mechanical or the offense running more through Derrick Walton. They were mental.

Irvin was 4 for 31 from the field over his past four games entering last night, including 2 of 15 from three. “At that point,” said Irvin, “you’re just telling yourself, ‘I hope I don’t miss it.’”

He made shots with great frequency during and after practice. Teammates and coaches encouraged him to keep shooting. He thought he’d gotten over the mental hurdle before Sunday’s game at Indiana, but he missed 7 of 8 shots, including some that were way off the mark. Last night, in a 64-58 win over Wisconsin, Irvin rediscovered the shooting stroke that had been missing for three weeks.

“I just had to change my whole mindset and think every shot I take is going to go in,” Irvin said. “That’s the mentality I had (against Wisconsin), just getting back to my usual self, and it worked well for me.”

Irvin finished with 18 points, his most since the last meeting with Wisconsin on Jan. 17, making 4 of 7 two-point shots and 2 of 5 from deep. “It was exactly what the doctor ordered,” John Beilein said of Irvin’s performance.

I just had to change my whole mindset and think every shot I take is going to go in.

Irvin’s play early in the game suggested this would be the night he broke out of his slump. He was active on defense, forcing a turnover on the first possession. By the first media timeout, he’d gotten to the foul line and converted an easy lay-up. And yet, he’d had similar starts in recent games—a quick lay-up and made three against Ohio State; an early and-one basket at Indiana—that failed to ignite him.

Even after the aforementioned positives last night, he sent his first jump shot—an open corner three—over the entire rim. A media timeout came shortly after, and Beilein was the first to greet Irvin with an encouraging pat on the back.

“To start it off with an air ball like I did, I had my head down a little bit, but Coach B and the rest of the guys were right there, (saying), ‘Keep shooting, keep shooting.’”

Two minutes later, Irvin dribbled left to right off a screen, as he’s done countless times in a Michigan jersey, read the help defender, and swished a long jumper over 6’10” Ethan Happ. Irvin said that was the shot that let him know this game was going to be different for him than the past four.

He still hadn’t made a three-pointer, however, until he banked one in from the top of the key, while fading away, as the shot clock expired with 12:54 left in the second half. He raised his palms to the roof, the message being, Well, if that’s what it takes…

“I kind of feel like when I made in that bank shot, a lot of pressure just—I was so relieved after it went in. I think that really just got me going in the second half.”

Beilein had predicted the breakout after Sunday’s game, saying, “It could be like in baseball, this bloop single to right field that gets him off the snide. Something’s going to happen good for him and it’s really going to help our team.”

After the bank, Irvin hit his next pull-up and buried a three when the defense sagged off him and thought, “I’ve got it going now.”

Even during the shooting slump, Irvin contributed in other ways. He admitted last week that as freshman, he may have “checked out of a game completely” if his shot wasn’t falling.

“The one thing about Zak is he never loses his energy,” Moritz Wagner said. “Even when he misses shots, he just comes up to us and gives us his natural energy, which is very important for a team like this.”

Late in the game, with Michigan up six, Irvin found himself guarding Happ after a defensive switch. The Wisconsin center had dominated the Wolverines, using his incredible footwork to get easy lay-ups. He went to work on Irvin, backing him down, but the 6’6″ Irvin held his ground, forcing a sloppy pass that was stolen and taken the other way for a Wagner dunk that tore the roof off Crisler.

“I’m a smaller guy. I try to use that to my advantage when I play against bigger guys, (being) quicker with my feet,” Irvin said. “I’ve been guarding 4s and 5s since I was a freshman here. I guarded (Frank) Kaminsky when I was a freshman. It’s really nothing new.”

Irvin dished out three assists (to just one turnover) in 38 minutes, and even had a rare two-handed dunk on a breakaway. “The guys were giving me crap about it after the game,” he said. “They were so shocked I did it. I thought we needed it though for the team and for the crowd as well.”

Thanks to Walton’s incredible play and more consistent contributions from others, the Wolverines went 2-2 during Irvin’s decline. Getting him back to his old self would be a huge boost for Michigan in these final five regular season games, four of which are on the road.

“It’s going to be very hard for us to have success this year if we shut him off and just say, ‘Don’t (shoot),’” Beilein said Thursday night. “He’s scored 1,400 points. We don’t say, ‘OK, you don’t know how to score anymore.’ You don’t forget that. It’s riding a bike. You might fall down a couple times, but you’ve just got to keep going with him while you build another package around him.”