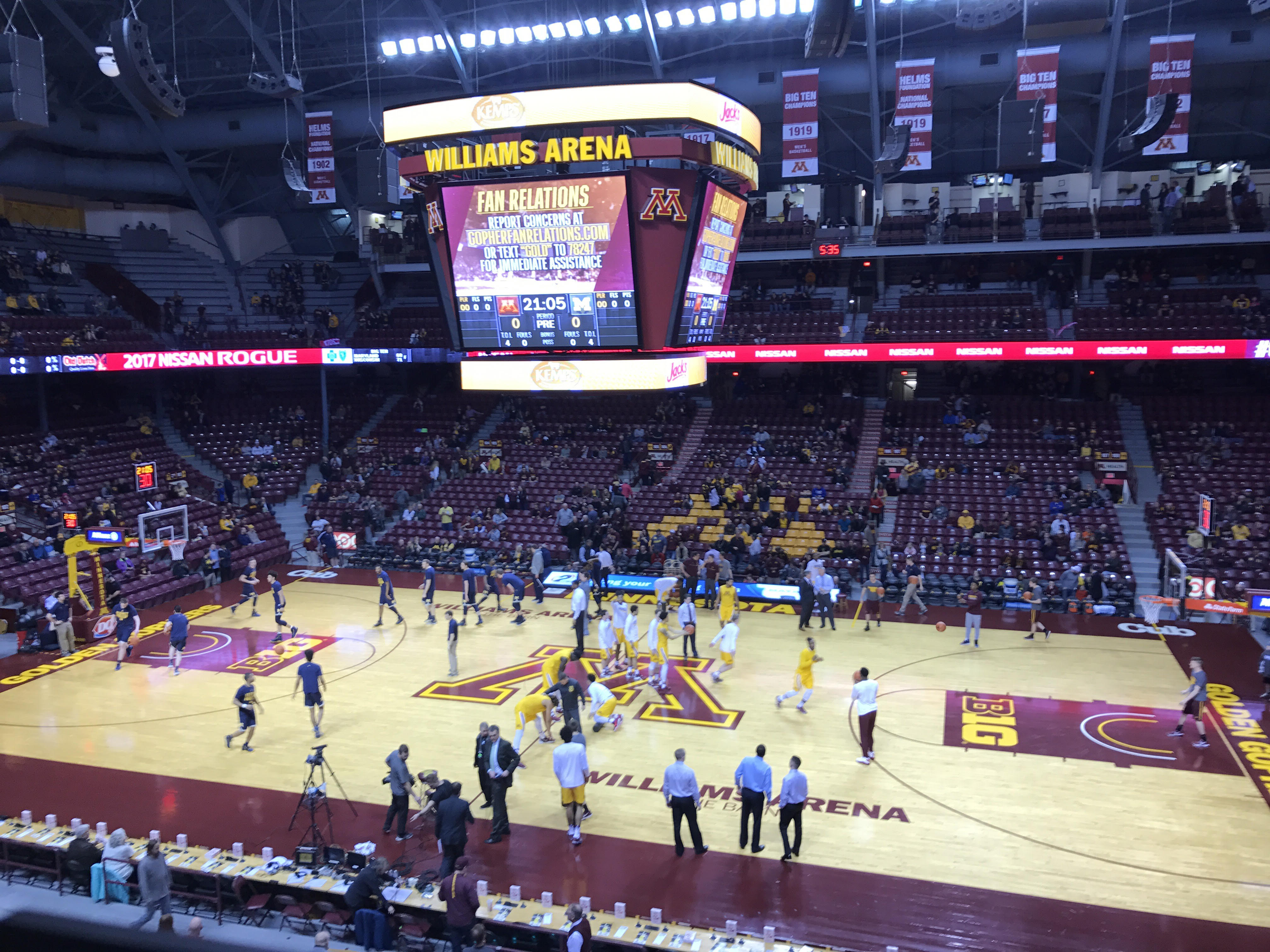 Michigan battled against Minnesota, forcing overtime despite trailing by 6 points with 1:17 to play, but it wasn’t enough to escape with a road victory.

Michigan battled against Minnesota, forcing overtime despite trailing by 6 points with 1:17 to play, but it wasn’t enough to escape with a road victory.

The Wolverines played nearly flawless offense in the second half, but couldn’t get out of the way of their own mistakes some frustrating officiating on the road. I’ll avoid one of John Gasaway’s four dullest topics in sports blogging, especially from my perch in the second deck of Williams Arena, but the numbers speak for themselves and while John Beilein wouldn’t comment directly, he certainly wasn’t pleased with the whistle.

Michigan also didn’t help itself when it made it to the line, making just 9-of-18 free throw attempts — the Wolverines entered tonight’s game ranked 4th in the country in free throw percentage — to be outscored 28 to 9 at the charity stripe.

In an overtime loss that featured 17 lead changes and eight ties and laid in the balance down the stretch, the first place to look is clear.

The four factors graph reiterates the foul differential as Minnesota posted a season-high 71.9% free throw rate (yet another high-water mark under Beilein). Michigan’s defense just couldn’t get enough stops in the second half and overtime and allowed the Gophers to score 17 second chance points. While a 31.7% offensive rebounding rate is right around average (for both teams and in the league), the sheer volume of misses (there were 41 defensive rebounding opportunities) meant that those offensive boards yielded 17 second-chance points.

Michigan’s offense wasn’t great at 1.05 points per possession, but most of that damage was done in the first half. Michigan managed just 27 points in 33 first half possessions (.81 PPP) before scoring 51 in the final 41 of the second half and overtime (1.24 PPP). The Wolverines made 62% of their two-point shots and Minnesota only blocked 3 shots on the night (shot blocking extraordinaire Reggie Lynch played just 13 minutes with foul trouble). That aggressiveness to create two-point shooting opportunities paid dividends and Michigan was also aggressive in transition (a 12-3 advantage) and off of turnovers (18-9 advantage).

While the Wolverines showed some impressive resolve to bounce back in the second half, there were still far too many moments in this one that felt like a missed opportunity. Just about every Michigan player that saw the floor will be able to look back on the game and find two or three plays that they want back and could have made the difference. Whether it was a missed free throw, a weak defensive rebound try, or a bad shot. The Wolverines were almost able to overcome them in the end, but those mistakes mixed with a harsh whistle were just too much.

This isn’t a loss that drastically changes the situation for Michigan, but with only 4 games left in the schedule it’s hard to stomach any missed opportunities. Next the Wolverines have to turnaround and head to New Jersey on Wednesday. Rutgers is the worst team in the Big Ten, but they are competitive this year and have given plenty of opponents a scare. They are also the best offensive rebounding group in the country.