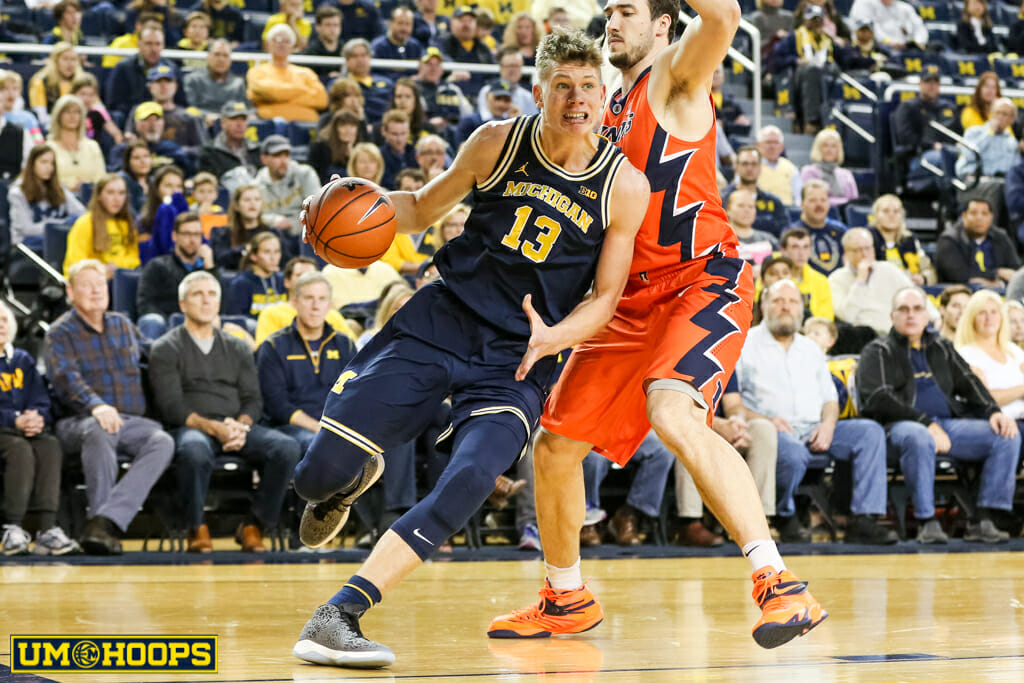 Moe Wagner is still working on his offensive counters. John Beilein doesn’t use officiating as an excuse.

When it comes to putting the ball in the basket, Rutgers is way below average. Simply put, the Scarlet Knights miss a lot of shots. But they are very good at rebounding those misses. Rutgers ranks seventh in the country in offensive rebounding rate, per KenPom. In Big Ten games, they grab a league-best 36 percent of their misses. Michigan, meanwhile, has often struggled to keep opponents off the glass.

When asked about what stood out from watching Rutgers on film, Beilein immediately mentioned the offensive rebounding. He said Rutgers sets a lot of ball screens for its guards. If a big man hedges on a shot attempt, forcing someone else to box out the screener, the domino effect could lead to some tough situations for Michigan inside.

“It’s a plan that’s very effective,” Beilein said. “Get a good shot and send four guys to the backboard.”

Of course, Rutgers has posted just a 2-14 record in the Big Ten. Unlike last year, there are plenty of single-digit defeats, but the rebounding alone hasn’t changed the outcome of many games. The stats would indicate Rutgers misses too many of its second-chance opportunities.

Having just played Minnesota and Wisconsin should help keep Michigan focused on rebounding, and if Rutgers sends everyone to the glass, perhaps the Wolverines can take advantage with fast breaks.

Way back in early December, after a blowout victory over Kennesaw State, Beilein warned that Moritz Wagner would need to develop offensive counters: “I would assume people will switch those screens more if it’s a pick-and-pop, and then he’s just got to dive and bury this 6-foot guard,” Beilein said then. “That will be a big point of emphasis.”

Sure enough, teams have adjusted to Wagner’s proficient outside shooting. Minnesota often switched defensively to take away the pick and pop option. On Tuesday, Beilein reiterated what he said in December. He said Wagner is coming along in realizing how to take advantage of matchups. “This evolution is fun to watch, but it’s baby steps.”

Wagner said he and his teammates recognized what Minnesota was doing. “We just couldn’t execute against it as good as we wanted to. I think we need to practice that and I have to be more aware that when people take away the jump shot to attack more or look for other opportunities.”

When he does attack, Beilein wouldn’t mind seeing his big man keep it simple more often. Wagner loves the behind-the-back move, but his coach feels he sometimes uses it unnecessarily. Why change direction if you’re already past your defender?

“Because the guy’s about to bump him,” Beilein offered as an answer, saying DJ Wilson can be guilty of the same thing. “When (they) can get leverage, don’t give it up just because there’s a bump.”

These are the breaks

Beilein was rightfully frustrated by the officiating in Sunday’s game at Minnesota, but relatively speaking he is not a coach that is too focused on the refs, during or after games. He did send some calls from that game to the Big Ten office for review, something he normally does not do.

“I just want the message to go to the officials that when they think we’re crazy, they see it on tape. And I might be wrong, too,” Beilein said. He added, with a smile: “I’m right more than they think, though.”

He was asked if he thought the officiating at Minnesota was consistent and said, “It’s part of basketball. They have a really tough job to do. The breaks aren’t going to go your way sometimes.”

Players are going to take on the personality of their coach, and so even on the occasions that Beilein does get animated with the refs or sends tape to the league, he shares a different message with his team, so as not to open the door for excuses.

“I don’t want that to be any type of crutch for our guys. You’ve got to play through all that stuff and that’s it. You have to understand this is a difficult game to officiate. … You can’t let that bother you as far as affecting the game.”