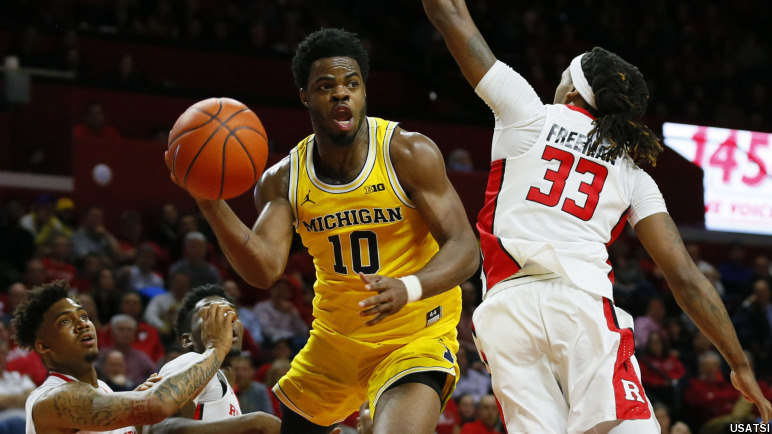 Michigan won an ugly game at Rutgers that it had to have.

Michigan had everything to lose and very little to gain on its Wednesday night trip to The RAC and it played like it was feeling the pressure.

The Wolverines led for most of the evening in New Jersey, but every time it felt like they could put the game away the Scarlet Knights crept back into the action. After extending the lead to 10 points in the first four minutes of the second half, Michigan let Rutgers back in and found itself down by 4 with 6:46 to play.

Michigan answered with a 10-0 run of its own, featuring a DJ Wilson three-pointer, a Derrick Walton and-one layup and a pair of layups by Moritz Wagner. The Wolverines held onto that lead down the stretch, but not without teeth gnashing as they missed enough free throws to give Corey Sanders a three-point look for the tie that he missed with two seconds to play.

Michigan has had worse offensive performances statistically this season, but I’m not sure it’s played a more frustrating offensive game. The Wolverines managed 1.07 points per possession in the end, but nothing about the performance was clean.

Free throw shooting is becoming a scary mental block for this team, which is ranked 6th in the country in free throw percentage but went 14-of-23 at the stripe tonight after going 9-of-18 on Sunday. Mathematics say that the last two games should be a statistical anomaly, but there’s clearly some mental hijinks going around in the heads of Michigan’s guards.

57% of Michigan’s shot attempts were three-pointers, and it made just 32% of its long-range efforts, but I thought they were good shots for the most part. Most came off of dribble penetration and kick action and the Scarlet Knights consistently over-helped and were leaving guys. The fact that Michigan also posted a free throw rate of 43% (their highest since the first Indiana game) speaks to the fact that there was at least some aggressive play going down hill.

The turnovers were most frustrating of all of Michigan’s offensive woes as it gave the ball away on 17.3% of its possessions and it felt worse than that. The Rutgers press took the Wolverines out of their comfort zone offensively and forced a litany of bad decisions which led to 15 Rutgers points off giveaways.

The next most surprising stat on the box score was Rutgers making its threes. The three-point luck bounced back in Michigan’s favor over the last few weeks, but Rutgers going 6-of-16 from deep is just the opposite. The Wolverines did hold the Knights to just 42% shooting inside the arc, but weren’t able to force the turnovers that have provided such a defensive boost in recent weeks.

There’s no such thing as a bad road win. The victory at Rutgers gave Michigan a modest RPI bump and it also doesn’t hurt to have a 2 instead of a 1 in the road victories column. Six of the Scarlet Knights’ previous 8 games had been decided by single figures, so it’s not like the rest of the league had been dominating them either — get into town, get out and move on.

Now it’s time for Michigan to go hunting. The Wolverines could be underdogs in the final three games and probably need to win at least one of them reach the NCAA Tournament. First up is a Saturday afternoon date with the league’s best team, the Purdue Boilermakers.