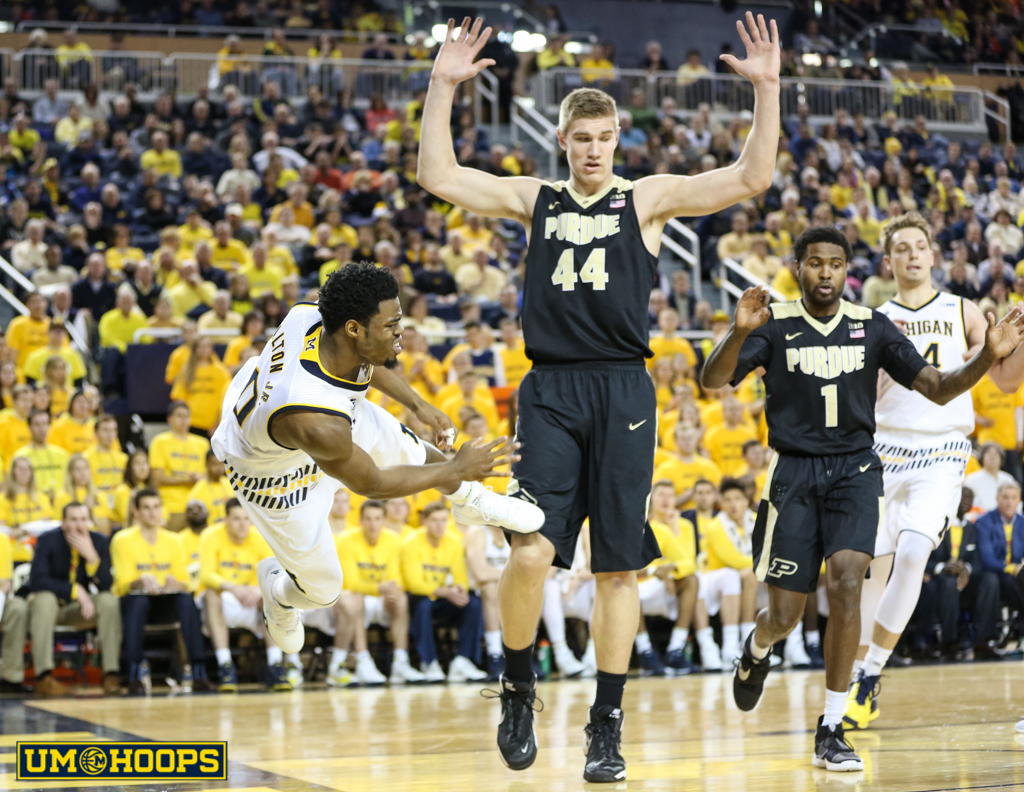 Michigan will host Purdue’s post-up and three-point heavy attack on Saturday afternoon at the Crisler Center.

In a match-up that will be pitched by many as finesse vs. brawn, Michigan and Purdue will face each other for the first and only time on Saturday afternoon.

Apart from the literal size of Purdue’s massive front line, this match-up is a little more complicated. Purdue is emerging as the class of the Big Ten, leading the league in efficiency margin and heading down the home stretch with the best record in the conference.

But while Purdue has the reputation of a grind-it-out, bully ball type of program, this is also a match-up of not only the Big Ten’s two best offenses. It’s also a showdown between the two most three-point reliant offenses in the league.

The two teams might have a different means to an end — Purdue’s threes often come out of post-ups and Michigan’s out of ball screen action — but there will be plenty of three-point attempts on Saturday afternoon in Ann Arbor.

Purdue’s offense is humming along at a 1.10 point per possession clip and features one of the best three-point attacks in the country. The Boilers shoot 50.1% on twos (4th) and 41.2% on threes (1st) for a 54.7 eFG% (3rd) in Big Ten games. Despite their massive frontcourt, they aren’t all that aggressive on the offensive glass, rebounding just 28.2% (11th) of their misses. Turnovers have been an issue at times, with giveaways on 18.6% of Big Ten possessions (9th), but this is the best offense that Michigan has faced for quite some time.

Over a quarter of Purdue’s offensive possessions end out of post-ups (shots, turnovers, pass outs or fouls) and they have the most-efficient post-up offense in the conference, per Synergy. Gonzaga is the only team in the country that comes within 100 points produced compared to the 668 points that the Boilermakers have generated out of post-up looks this season. Despite those impressive post-up numbers, Purdue is ranked last in the Big Ten in percentage of points scored inside the arc. What gives? Purdue’s big men are excellent at finding shooters out of the post when the double-team comes and just about anyone that they’ll pass the ball to can make a three. Purdue has a 70 eFG% on Hass’s pass-outs and 67 eFG% on Swanigan’s pass-outs, per Synergy.

The Purdue defense has been solid all year, but Matt Painter’s team seemed to lock in after playing a horrible defensive game at Nebraska on January 29th. Purdue hasn’t allowed better than a point per possession in the six games since (all wins) and is allowing .97 points per possession in league play for the No. 2 defense in the conference.

Purdue’s defense does everything but force turnovers. Big Ten teams are shooting just 46% on twos (5th) and 31.9% on threes (3rd) for a 46.6 eFG% (2nd) and Purdue allows the second-fewest three-point attempts in the league at just 30.3% of attempts. So it’s hard to make shots and even take threes against the Boilermakers and the are also the best defensive rebounding team in the league, grabbing 75.5% of their opponents misses while giving up the fewest free throws.

National Player of the Year candidate Caleb Swanigan is naturally the first name on the scouting report. There’s not much that he can’t do well. He’s an elite defensive rebounder and a very good offensive rebounder. He can post-up to pass, score or get fouled and while his three-point shooting felt like a gimmick last year, it’s a legitimate weapon as a sophomore.

Big man Isaac Haas measures in at 7-foot-2, 290 pounds and is simply hard to move off the block. He might not be as versatile as Swanigan, but he can carve out so much space that it’s almost impossible to stop him if he catches the ball on the block. He’s shooting 58% on two-pointers and draws 7.8 fouls per 40 minutes (2nd in the league) which could prove a big problem for Michigan’s bigs.

Freshman guard Carsen Edwards is one of Purdue’s primary ball handlers and leads the team in used ball screen possessions. He’s not the most efficient player, but he has plenty of confidence in his ability to get shots off despite shooting 39% on twos and 39% on threes in Big Ten games. Edwards is capable of getting hot, but he’s the least-efficient player on the team and takes 28% of Purdue’s shots while he’s on the floor so he’s the guy you want shooting.

Junior forward Vincent Edwards is almost a forgotten man in West Lafayette. He’s an incredibly versatile combo forward who can hit open threes (42%), pass the ball, attack the offensive glass and doesn’t turn the ball over.

Dakota Mathias is one of the best shooters in the Big Ten and he’s 31-of-67 from deep in league games. He also has a reliable pull-up jumper and is a very good passer. He’s a guy that you can’t help off defensively and if you do he can obviously make you pay.

PJ Thompson starts at point guard but plays a limited role offensively. When he does shoot, he’s usually efficient as he knocks in 52% of his twos and 42% of his threes. Ryan Cline is a great three-point shooter above the wings and he comes off the bench with one job: shoot the triple. He’s a scouting report guy that you need to run off the line and he won’t be able to do much more.

Spike Albrecht needs no introduction, but he hasn’t shot the ball this well this year. He’s just 5-of-13 on twos and 4-of-22 on threes for the season, but he’s played some better basketball over the last three games.

The KenPom projection is Purdue by 1, 72-71, with a 48% chance of a Michigan upset. It’s Senior Night in Ann Arbor and a win could help cement Michigan’s NCAA Tournament chances, but Purdue is also playing for a Big Ten Championship and should have plenty of its own motivation.