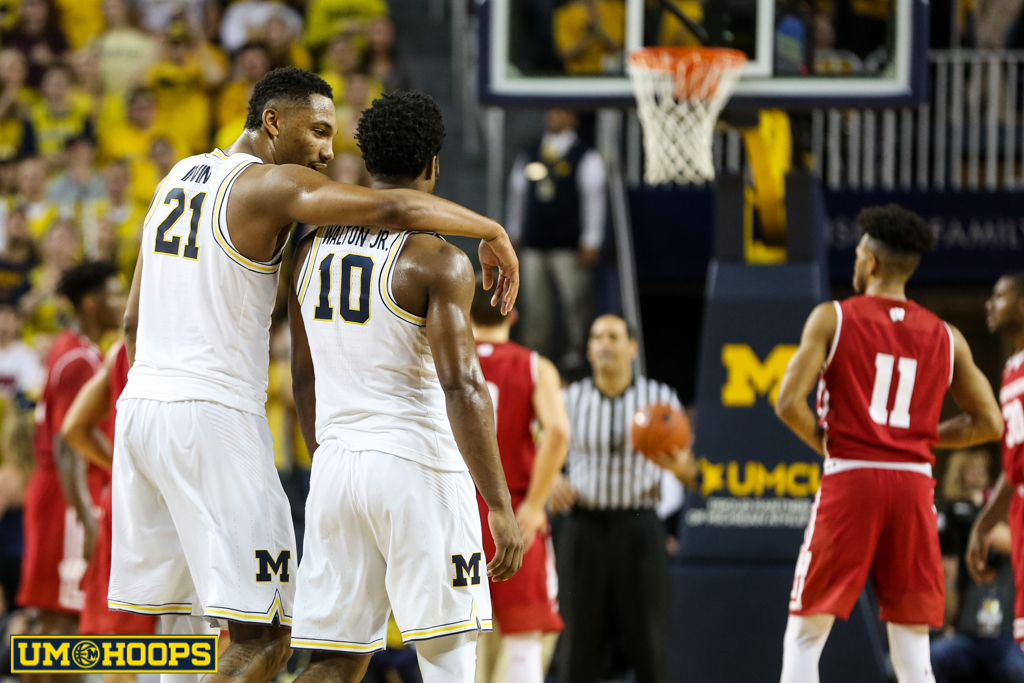 It doesn’t seem like the Senior Day festivities will affect the Wolverines when they battle Caleb Swanigan and Purdue.

Outside of Ann Arbor, those who tune in to a Michigan game and hear Derrick Walton’s or Zak Irvin’s name often think, Those guys are still around?

Every conference has a handful of players like that, seniors who have been in the spotlight seemingly beyond their allotted eligibility. Walton and Irvin certainly fit the bill. Tomorrow, the captains and roommates will play their final game at Crisler Center.

Walton is convinced that Irvin will cry during the pre-game ceremony.

“I’ve been hearing this from him, I’m telling you, for the past week now,” Irvin said. “He just won’t shut up about it. He said it again last night. I said, ‘Will you quit telling people this?’ I’m not going to.”

Walk-on Sean Lonergan will be honored as well, along with Andrew Dakich and Mark Donnal, both of whom have a year of eligibility remaining but are expected to play elsewhere next season.

Both Walton and Irvin downplayed the hoopla surrounding Senior Day and said they’re completely focused on the game against first-place Purdue. For one, the duo rarely strays from the “one game at time” mantra. Secondly, Michigan is fighting for its NCAA Tournament life. Every game is critical.

They each said they hadn’t given much thought to playing their last game at Crisler. Irvin expects it will hit him when he walks through the tunnel, either before or after the game. Walton may never think about it.

“I’m not too emotional, especially when it’s time to play,” Walton said, noting he had no problem handling his Senior Night in high school and still playing well. “I’ve got one job: to win the game.”

John Beilein feels the same way. “Maybe I’m a scrooge on this thing, but it’s about winning one more game,” he said. “It’s great to have their moment and get their jersey…but there are a lot more highlights hopefully left in this season than just Senior Night.”

If nothing else, Irvin will relish the opportunity to play a school from his home state in front of 50 to 60 family members and friends. “The Irvin gang, they roll in strong,” he said with a smile. “I’ll probably be able to hear them when they’re yelling.”

Last year’s Senior Night—featuring Caris LeVert and Spike Albrecht, both of whom were injured—was rather depressing. The outcome of the game will of course go a long way in determining the mood among the Crisler faithful, but at least the players being recognized will be in jerseys and shorts, not jackets and ties.

Walton and Irvin appear regularly on Michigan’s all-time leaderboards. Irvin will likely finish third in program history in games played. Both have scored 1,000 career points. Walton is one of just three Wolverines with at least 1,000 points, 400 rebounds, and 400 assists. This season, they’re the two players leading the Wolverines in both scoring and assists, and are second and third in rebounding.

They arrived in Ann Arbor on the heels of Trey Burke, Tim Hardaway, Jr., and the “Fresh Five” leading Michigan to the national championship game. They played supporting roles for a season—though Walton started—as Nik Stauskas, LeVert, and Glenn Robinson III took the Wolverines to a Big Ten title and the Elite Eight. Since, they’ve been “the” guys more often than not, getting Michigan back to the NCAA Tournament last season and hoping to do it again.

This is not your father’s Purdue team. The Boilermakers have the size and talent up front, as has been the case in the recent past, but this season they also boast terrific three-point shooting. In fact, even 6’9″ Caleb “Biggie” Swanigan, a national Player of the Year candidate, is now a threat from the outside, hitting 29 of 62 (47 percent).

“Last year when we played him we did not guard him on the perimeter,” Beilein said of the three matchups, two of which were Purdue victories. “We tried to clog up the paint with his man. Now he’s become an elite three-point shooter.”

Beilein also credited Swanigan’s passing skills, whether he’s kicking it to a shooter from a post-up or dumping it inside to the 7’2″, 290-pound Isaac Haas off of high-low action.

Said Beilein of Haas: “You front him on one side, and it’s another area code to get around to get to the top side of him. He does a great job of sealing. He gets easy baskets that you can’t stop.” Both bigs are capable foul shooters as well (Haas at 72 percent, Swanigan at 78 percent).

Michigan’s film sessions revealed that Swanigan and Haas are only on the floor together for about 15 minutes a game. When that is the case, and Swanigan moves to the power forward spot, DJ Wilson figures to be the primary defender. He’s held his own in the paint this season, and Zak Irvin has had some success against Swanigan in the past, especially if he can exploit the matchup on the other end.

“You better get a good night’s rest to go against Biggie,” Irvin said. “He’s very talented. And it does take a lot of energy out of you to go down and battle with him and go down and score at the other end.”

John Beilein’s son Patrick, a graduate assistant for the Wolverines from 2008 through 2010, was just named the Coach of the Year in the Northeast-10 Conference. Patrick is the head coach at Division II Le Moyne College in Syracuse, New York, where John coached from 1983 to 1992. Le Moyne plays its first conference tournament game on Sunday, and the proud father will be watching.

Beilein said he communicates with his son nearly every day, either with a phone call or text message, to discuss something coaching-related. Asked if Le Moyne is using a lot of Michigan’s concepts, John said, “They play a lot better defense than we do, that’s for sure.”

A few years ago, I asked Patrick what he learned about coaching from his dad. The first thing he mentioned was his father’s sideline demeanor.

“As a player, you felt he had confidence in you and that’s a great feeling,” he told me. “I have brought that into my own style. I give my guys confidence—they believe that I believe in them. That goes a long way; longer than people think.”