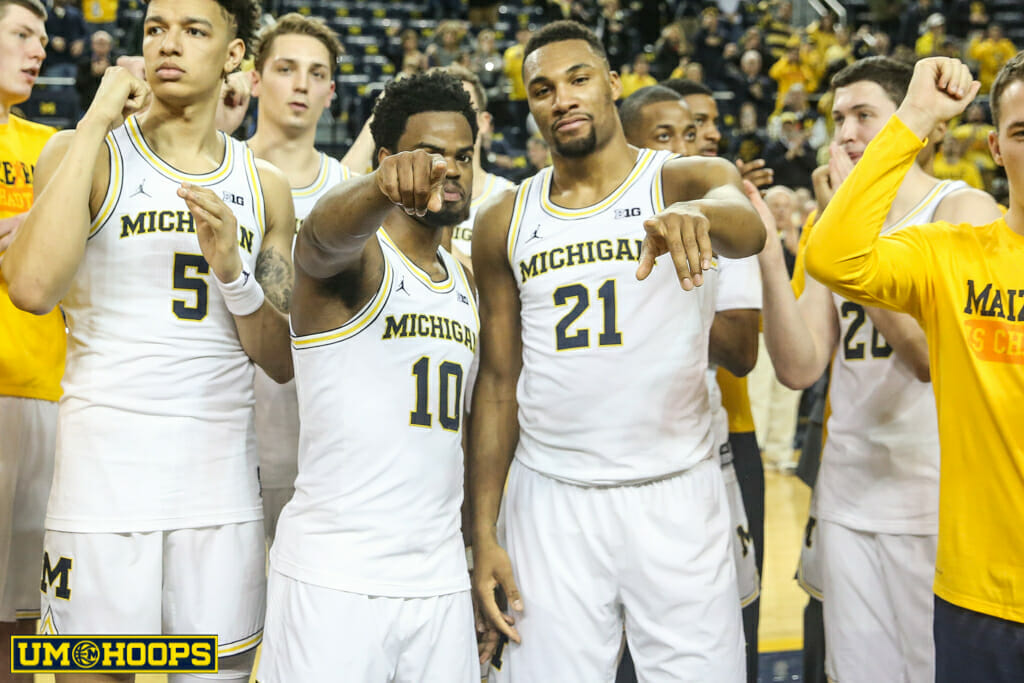 Michigan’s offense picked apart Purdue for another statement win, moving it one step closer to the NCAA Tournament.

“If what we’re going through at this point spearheads a run and helps us take the next step, then I’m all for it. I’m more so excited, I think it makes a better story.”

That was Derrick Walton three weeks ago in the Crisler Center media room. Michigan had just lost a deflating game to Ohio State at home, but he stood there answering question after question. He wasn’t feeling sorry for himself about missing a critical late shot or about Michigan’s 4-6 Big Ten record, he was oddly confident.

Since then, Michigan is playing some of the best basketball in the Big Ten. The Wolverines have won 5 of their last 6 games including victories over Purdue, Michigan State, Wisconsin and Indiana. Walton has been in the middle of every win, writing the end of his Michigan story on his terms.

The Wolverines won another marquee game and, as they’ve made a habit of, the game was almost on ice by halftime. Purdue made a late run to cut the lead to 6, but Michigan led wire-to-wire with a lead that ballooned to 22 points in the second half. And this was against the Big Ten’s best team and best defense.

Moritz Wagner dazzled early on, scoring 20 points in the first half by himself before Purdue could pass that mark as a team. He scored on the opening possession and it was clear that his eyes lit up at the opportunity to attack National Player of the Year candidate Caleb Swanigan.

Swanigan is bigger and stronger, but Wagner was quicker and could shoot. He took advantage with just about every weapon in his arsenal and finished with 22 first half points on 12 shot attempts including four triples.

This was Purdue’s worst defensive performance in over two years, dating back to when the 2015 Wisconsin Badgers steamrolled them in the Big Ten Tournament. If you recall, that Wisconsin team was caught up in a run that wouldn’t end until the final Monday of the season.

Michigan picked apart the Big Ten’s best defense to the tune of 1.26 points per possession. The offensive explosion was basically all derived from pick-and-pop action that put Purdue’s big men in defensive situations that they wanted no part of.

The attack worked and the shots were falling most of the night. Michigan made 66% of its twos and 42% of its threes for a 64.5 eFG% on the night. Purdue gave Michigan a bit of a hiccup early in the second by switching every screen — as the Wolverines missed their first 7 threes of the second half — but they finally started falling again with a Xavier Simpson triple that gave U-M its biggest lead.

This Michigan team will go wherever its offense takes it and the offense continues to prove that it is elite on that side of the ball. Michigan is up the 8th nationally in adjusted offensive efficiency and proved again that it just takes one 20 minute segment of perfect offense to beat just about any team in the country.

Defensively, the Wolverines were very good early, but allowed Purdue to climb back into the game late. Purdue missed a ton of shots in the paint, but Michigan deserves credit for contesting those looks and being aggressive without fouling. Caleb Swanigan made 8-of-11 shots, but he turned the ball over 5 times as the Wolverines applied great double-teams all night.

The Boilermakers ended up shooting 56% on twos and 31% on threes for a 53 eFG%, and three of Purdue’s 5 made threes came after Michigan pushed the lead to 22 points with 8 minutes to play.  There was a point in January where it looked like the Wolverines might not ever get a stop in Big Ten play, over the last few weeks they’ve looked significantly better on that side of the ball. You could probably count 10 possessions in this game that featured better defensive rotations than any possession in some of those early January losses.

This win should move Michigan safely into the NCAA Tournament, but there are still plenty of games to play. The next two games on the road at Northwestern and Nebraska are certainly winnable and there’s a real opportunity for the Wolverines to improve their seeding in both the Big Ten and NCAA Tournaments.