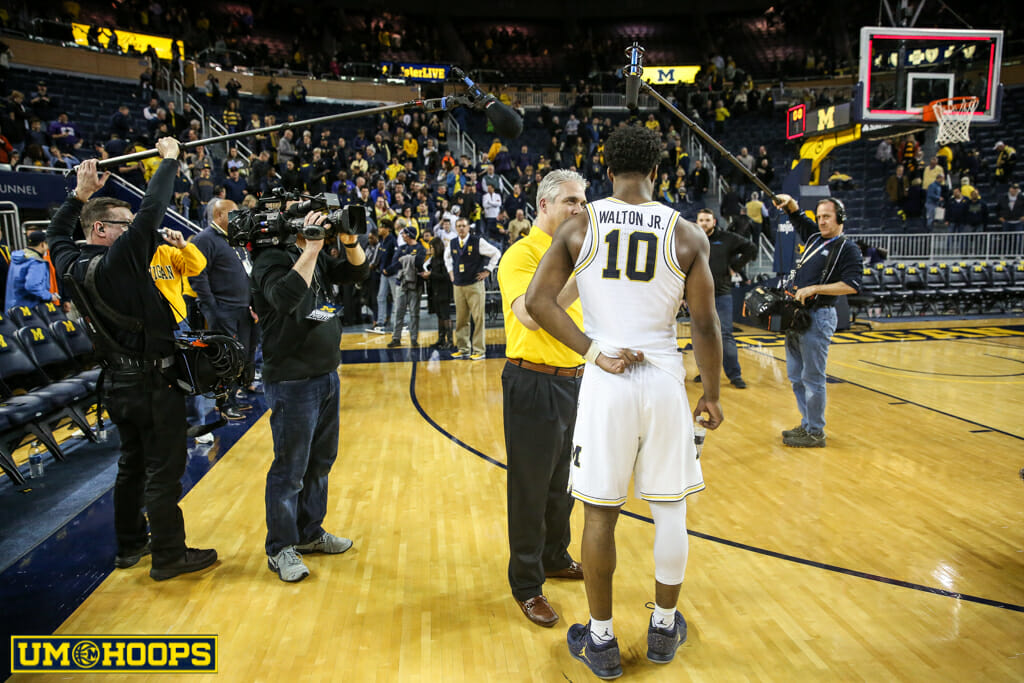 Derrick Walton led Michigan to its fifth win in its last six games.

Purdue coach Matt Painter said what would have been hard to believe in the first half of the conference season: Derrick Walton is probably going to be a First Team All-Big Ten player. Playing in his final game at Crisler on Saturday, Walton continued his run of stellar play. He tallied 17 points, 11 rebounds, five assists (against no turnovers), and controlled the game like only elite point guards can do.

Over the last six weeks, Walton has mastered how to be aggressive without forcing shots; how to set up his teammates without deferring. The “white collar” comment certainly helped; it inspired Walton to prove it didn’t apply to him. KenPom.com assigns an MVP to each game, and not since the win over Illinois on Jan. 21 has a Wolverine other than Walton earned that distinction.

His use of Moritz Wagner’s ball screens has been fun to watch. He is adept at the “hang dribble”—that slower, higher dribble that gives him extra time to assess the defender. Often against Purdue, he ended up passing to Wagner for a three. Of his five assists, four came on Wagner baskets, including three triples.

“That’s just my guy, man,” said Walton of Wagner when asked about the pick and roll/pop chemistry. “I’ve got an absurd amount of respect for him. We go through it so much in pregame. That’s just our little thing. He knows where I’m at, I know where he’s at. With a defense like that, I felt like it was my priority to make sure he got the ball in space. Whenever I had two guys on me I made sure I found him.”

Walton, unsurprisingly, did not allow himself to get too emotional during the Senior Day ceremonies. “All the theatrics before the game got me kind of tight. I was like, you know what, I appreciate it all, but we’ve got a game to play.”

From the opening tip, he displayed all the skills that have elevated his play the second half of the season. He found Wagner cutting for a layup on the first possession. He jumped a passing lane and scored at the other end with an acrobatic finish. He banked in a short jumper through contact. And Walton, at 6’1″, 190 pounds, grabbed 11 rebounds, as many as Caleb Swanigan and Isaac Haas (a cumulative 14 feet, 540 pounds) had combined.

Even when Walton messed up, it worked out. When Purdue rallied late to cut the deficit to six, Walton, Duncan Robinson, and Zak Irvin dribbled aimlessly around the perimeter for most of the shot clock. Walton had the ball at the end and picked up his dribble beyond the three-point line. He leaned past his defender and drained an off-balance three as time expired, a shot he said he’d never attempted.

“I silently thanked God because there was no reason I should have made the shot. It was probably one of the worst possessions we had all game.”

Beilein, in the locker room after the game, told Walton, “That was a hell of a shot. … You deserve it. Michigan guy, work your ass here for four years. Sometimes you’re good, sometimes you’re lucky. But the harder you work, the more luck you have.”

Beilein has been as hard on Walton in practice as any other player he’s ever coached. “I applaud him for being able to take that type of coaching and still flourish.” Walton came to Michigan and, due to Trey Burke’s early departure, started right away. He was forced into being a leader before he was ready, according to Beilein. Walton is finally at peace and has even stepped out of his comfort zone—by being more vocal—to help the team.

Asked if Saturday was different, emotionally, given that it was his final game in his home arena, Walton said it hasn’t hit him yet. “I just thank the guys that supported me and the loyal fans that we have. I’m just grateful for the opportunity I was given here and I want to make the most of it.”

With his career winding down, he’s doing just that.