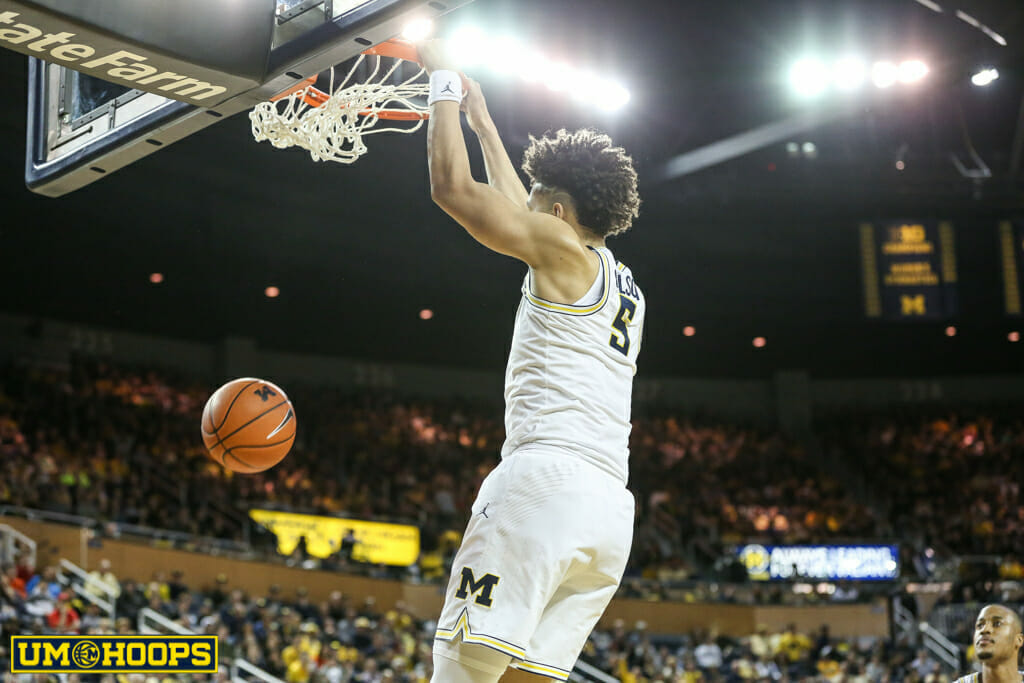 In today’s mailbag we look at switching screens, Muhammad-Ali Abdur-Rahkman and much more.

@jlustig22: do you expect more teams to just start switching all screens on defense against UM? Is that the best way to defend the pick & pop?

There’s a reason that most teams don’t switch ball screens between the point guard and five man: it’s really hard to do successfully. Most big men can’t step out and guard guards out to the three-point line, most struggle to hedge for a few steps without fouling let alone switch. So while switching every screen does seem to disrupt Michigan’s offense at least a bit — and is a good way to counteract the pick-and-pop — it just isn’t an option for many teams.

The way that several teams have adjusted to this is by guarding Wagner with more of a combo forward (Indiana’s Juwan Morgan or Purdue’s Vince Edwards) who has more of a chance to stay in front of him. I think that approach is on the right track — Wagner is better against bigger, slower players than quicker, smaller players — but it allows DJ Wilson to have the same mismatch opportunities that Wagner had originally. Both Wilson and Wagner are efficient players, but if you had to choose one to beat you I would personally take Wilson. That being said, Wilson made Purdue pay in the second half and also had some bright moments vs. Indiana.

Burke_Does_Work: Is there any correlation between Michigan’s recent upswing and MAAR’s increased scoring (particular from 3)?

Quietly, Muhammad-Ali Abdur-Rahkman has settled into a comfort zone. He’s reached double-figures in six of Michigan’s last 7 games, something he accomplished just 3 times in the first nine Big Ten games of the season. He’s also been ridiculously efficient.

In February, he’s shooting 20 of 26 inside the arc and 9 of 22 from three-point range — that’s a 69.8 eFG% — with 16 assists. His eFG% before February was just 48.3% and those numbers are night and day difference and certainly make an impact. Abdur-Rahkman had settled into a grove late last season as well and he’s certainly an important piece of this Michigan offense heading down the stretch.

He’s not the focal point of the offense, but he’s been there to get a big basket seemingly whenever Michigan needs one. His improvement has also coincided with Zak Irvin’s slump, which has provided an important alternative source of production on the wing.

JumpStop212: If DJ Wilson and Moe Wagner continue their upward trajectory of improvement through next season… AND… Michigan lands Bamba, who starts at the 4 and 5 spots next year?

This is quite a hypothetical, but I’ll play along. If you add Mo Bamba to this roster, I think you just go all-in on the jumbo lineup and slide everyone down a spot.  The three and four spots are so similar offensively that you wouldn’t have that much of an adjustment for Wilson, but you wonder how Wagner would fare on the perimeter full-time. Either way, it would be a good luxury to have and Bamba would shore up so many interior defensive problems for the Wolverines.

YostsGhosts: Since it looks like Michigan will be seeded into the 7/10 or 8/9 game, which #1 or #2 seed contenders would UM match up best against — if Michigan was to advance out of Round1.

I think the first thing you are looking for in a NCAA Tournament match-up is a team with more traditional bigs that can’t move their feet. A Moritz Wagner mis-match is the best option for Michigan and we’ve seen him attack Caleb Swanigan and Thomas Bryant so effectively off the bounce. Facing a team with strong post players might sound counter-intuitive, but longer and more mobile bigs could be much tougher on Wagner. Hypothetically, you’d want that team to also be just average on the offensive glass, similar to Purdue.

The Zags sort of fit the bill with a couple of massive big men who are just average on the offensive glass. Post defense would be a problem for Michigan, but the Wolverines have had plenty of practice executing double-teams vs. Wisconsin, Purdue and Michigan State. On the other hand, the Zags have only lost one game all season.

wolverheel: How is the Big Ten looking for next year? Is there still going to be a lack of any elite team? Any team that struggled this year have potential to breakout next season?

There’s a lot of young talent in the league, but I’m not sure there’s a team that is a lock to take the next step to ‘elite’. I think four teams stand out as programs that are ready to take the next step, but trying to estimate their ceilings next year is a fool’s errand at this point.

Northwestern, Minnesota, Maryland and Iowa all should return the bulk of their rotations and showed signs of promise this year. They all should take a step forward next year, but I’m also not sure that any of those rosters are loaded with pros like we saw in the Big Ten a few years back — there aren’t many Big Ten names listed in early 2018 mock drafts. Still, all of those teams should be relevant nationally and have promising young talent.

Michigan State brings in the best recruiting class in the conference, but also could very well lose Miles Bridges to the NBA Draft. Cassius Winston will be great with seasoning and Josh Langford should make a sophomore leap, but as good as Jaren Jackson is I’m not sure that he’s an upgrade over Bridges.

hailtoyourvictor: How would X-MAAR-Matthews-Wilson at the 1 through 4 compare defensively to other Big Ten teams at the 1-4 next year?

I’m not really sure how you can compare groups of four defensively without including the five position, usually one of the most important defensive spots on the floor. Matthews should provide a defensive upgrade, but there’s just not that much film to use as a gauge of what he’ll provide. He certainly has great athletic abilities and that should provide a boost. Xavier Simpson is small, but has shown defensive promise. DJ Wilson has had some promising defensive moments, but there are still certain match-ups that give him fits — combo forwards that can drive at him.

Right now Michigan has the third-worst defense in the Big Ten, how much better can it be next year with the roster as is? I’m not sure that Michigan’s rim protection (13th in 2-point defense, 12th in block rate) is going to be that much better with Wagner still at the five, so I’d say probably a few spots improved toward the middle of the pack in the league.

@colintj: would be really interested to see a before/after Donlon analysis. their D profile is vv different.

Both this year’s defense and last year’s defense gave up right around 1.08 points per possession in Big Ten play, but there are some notable differences. Last year’s team gave up a lot of three-pointers — 38.2% of FGA — and this year’s team leads the Big Ten by only allowing 3PA on 29% of FGA. This year’s group is also forcing turnovers on 19.5% of opponent possessions compared to 16.6% last season. The free throw rate allowed is also up from 25.7% to 29.2%, but I’m not sure that’s much of a strategic shift as much as a remnant from the game in Minnesota where Michigan allowed its worst free throw rate ever under Beilein.

So in short, Michigan is allowing fewer three-point attempts and forcing slightly more turnovers, but still lacks much of any interior defense.

ghostofstjohnarena: Off the wall question. Shoot me if it’s stupid.
Who would you take as a building block for next season’s UM team?
A. Stauskas as a freshman
B. This season’s Mo Wagner

This is a tricky question for a couple of reasons, mostly because it’s hard to ignore what Michigan has, but it gets at a more fundamental point: next year’s roster is really unlike any recent Beilein roster.

The best talent is in the frontcourt with Moritz Wagner and DJ Wilson, and Michigan is going to have to figure out how to play through them on a nightly basis. The majority of the guards and wings who will see the floor are either young or have been low usage cogs in the past. Michigan also adds Jordan Poole, a guy who it hopes will be similar to the freshman year version of Stauskas as essentially a designated shooter.

But I’ll go with Wagner because I’m excited to see how everything plays out around him. He’s averaging 13.4 points per game this year in league play and the sky is the limit for his offensive skillset. He can score inside, outside and if he learns how to drive-and-dish instead of just driving to score, he’s going to be tough to stop..