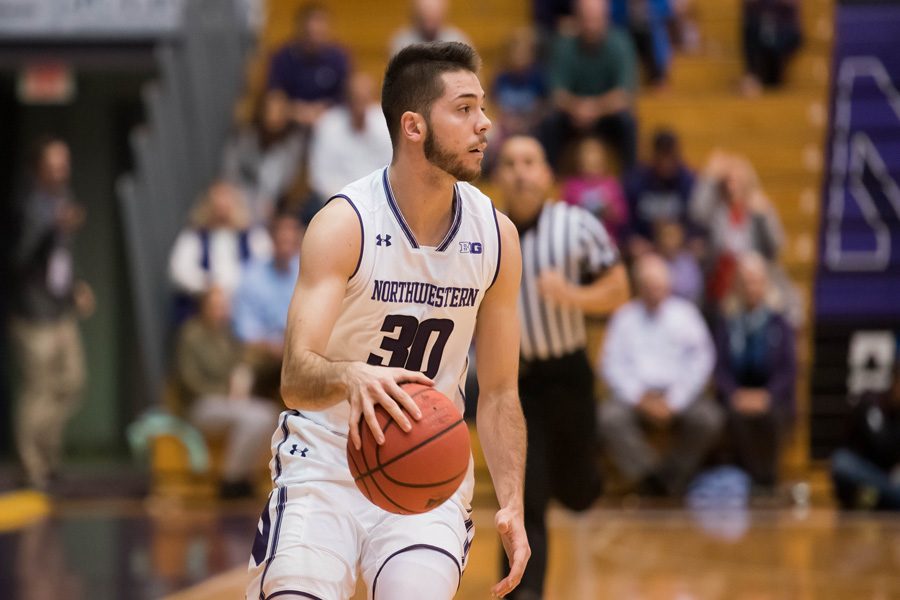 Michigan faces Northwestern tonight in a battle of teams looking to solidify their place in the NCAA Tournament.

Michigan and Northwestern both already have one foot into the NCAA Tournament, but the winner of tonight’s match-up will sleep a bit sounder leading up to Selection Sunday.

Michigan still has a chance at securing a top-4 seed in the Big Ten Tournament, which comes with a double-bye, but it will need to win out and get a little luck from around the league. Northwestern has lost 5 of its last 7 games in a stretch that featured its signature win over Wisconsin, but not much else. The Wildcats started conference play 7-2, but their resume doesn’t look nearly as impressive with a late-season swoon.

If Northwestern makes its first NCAA Tournament appearance ever, it will be thanks to its defense. The Wildcats have the No. 3 defense in the Big Ten .997 points per possession allowed and boast the best eFG% in the league. While Michigan is averaging 1.14 points per possession in Big Ten games, only one Big Ten team has topped that mark against Northwestern (Purdue on Feb. 1).

Big Ten teams are shooting 44.5% on twos (2nd) and 33.6% on threes (4th) against the Wildcats for a 46.4 eFG%. They’ve also picked up some nice free throw luck, allowing a league-low 66% at the charity stripe in conference games. It’s hard to make shots against Northwestern, but it ranks in the bottom third of the league in forced turnover rate (8th), defensive rebounding rate (11th) and free throw rate allowed (12th). So it is possible to chip away against the Wildcats even without shooting well, but Michigan generally doesn’t make much of an impact in the later two departments.

John Beilein described the Northwestern defense as solid and that’s a good way to put it. There’s nothing flashy or fancy involved, just a group of solid defenders who play well together as a unit and force tough shots.

Northwestern is outscoring its league foes by just 3 points per 100 possessions (compare that to Michigan at 6.2 with the same 9-7 record) despite the great defense. That’s because the offense just hasn’t been consistently effective this season. The Wildcats are scoring 1.03 points per possession (10th) and are the second-worst shooting team in the conference.

Junior guard Bryant McIntosh uses 28% of Northwestern’s offensive possessions, but is shooting just 44% on twos and 30% on threes in league play. He is also the No. 2 setup man in the conference with a 36.2% assist rate and the Wildcat offense goes as he goes. He takes a lot of tough twos and off-the-dribble threes and you want to make him beat you with the shot rather than the pass, but if he starts hitting them — as he did in Madison — it can make for a long night.

Only two players in the Big Ten have used more ball screen possessions than McIntosh (Melo Trimble, Tai Webster) and he has close to a 50-50 split in terms of shooting (54%) or passing out (47%) which can make him a tough cover.

Junior wing Scottie Lindsey looked like a potential All-Big Ten player in in January, but was sidelined for four games with mono. This will be his fourth game back and he’s still rounding into form. He’s made just 7-of-18 twos and 2-of-16 threes since his return. He might be slumping, but he’s still the same guy who averaged 18 points per game over the first 7 conference games.

6-foot-7 sophomore Vic Law has ugly shooting splits — 35% on twos, 35% on threes for a 42.1 eFG% — but he’s a high-level athlete with length on the wing. Law’s offense generally comes off of spot ups, screens and in transition and he won’t hesitate to attempt the mid-range jumper.

Freshman guard Isiah Brown is the other Northwestern player who will fill the McIntosh role of playmaker off the bounce. Like McIntosh, he isn’t very efficient. Brown does a good job of drawing fouls, but he loves the mid-range jumper and is shooting just 40% on twos and 24% on threes.

6-foot-8 sophomore Dererk Pardon was going to redshirt last season before Alex Olah’s injury last season,but the experience he gained has proven valuable. Pardon is ranked in the conference’s top-10 in offensive rebounding rate, 2-point shooting (59%) and shot blocking. He’s also staying out of foul trouble and playing major minutes (at least 32 in each of the last 6 games). He seems like someone strong and mobile enough that he could give Moritz Wagner some issues defensively and the foul situation with both bigs will be an important storyline.

Sanjay Lumpkin starts at the four at 6-foot-6, 220 pounds. He’s a glue guy who grabs defensive rebounds and cuts to the rim. He’s only using 10.6% of Northwestern’s offensive possessions while he’s on the floor and is shooting 63% on twos, but has only made 7-of-25 threes in Big Ten play.

Backup big man Gavin Skelly is active in the pick-and-roll game and will shoot the three (32%), but he shoots just 39% inside the arc. He’s an active offensive rebounder and shot blocker, but he’s not very diverse offensively.

6-foot-7 forward Nathan Taphorn is the primary perimeter shooting threat to track. He’s the most consistent three-point threat on the roster and when he’s in the game he simply has to be run off the line.

KenPom gives Michigan a 44% chance at the road upset, projecting a 67-65 Northwestern win. It feels like a game where Northwestern could struggle to keep up with Michigan’s offense on a good day, but the Wolverines will need to crack the tough Wildcat defense.