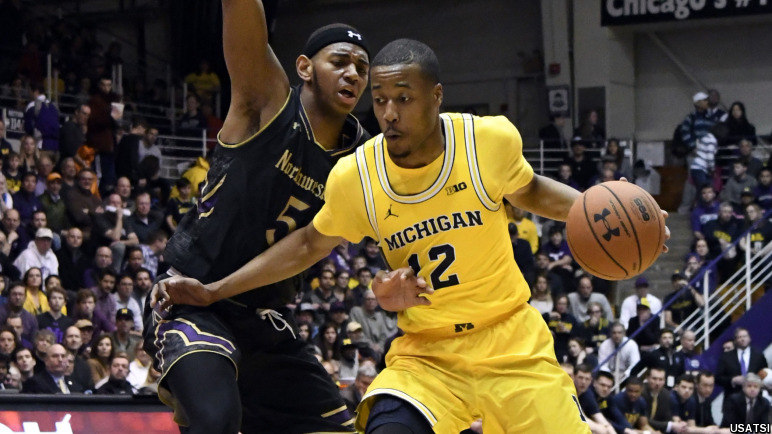 Michigan lost another frustrating game on the road despite having a chance to win the game late in regulation.

30 games into the season, it appears that Michigan is still trying to get every painful way to lose out of its system.

Michigan players and coaches will fire up their iPads on the way home from Evanston and look at a dozen or so plays that they should have made but didn’t and wonder how they dropped another road game that was right there for the taking. The last 6 minutes of this game will feel like a nightmare.

The Wolverines led 60-58 with under 6 minutes and only managed 5 points in its final 9 possessions to close the game. They promptly got three stops and went empty on three offensive possessions, then the mistakes compounded.

Michigan picked up a violation for entering the three-point arc after the ball had been passed to Moritz Wagner for a one-and-one attempt. A mistake that most get out of their system early on in their careers as I distinctly remember making the same error at middle school AAU tournament.

While the defense held tough, the Wolverines eventually lost on a last-second pass the length of the floor for a buzzer-beating win. Do you just tip your cap? Here’s a look back at the final two possessions to try to figure out what on earth happened.

Muhammad-Ali Abdur-Rahkman rebounded the ball with 10 seconds left to play on Michigan’s final offensive possession. He got the ball up court and crossed half court with around 6.5 seconds left and Irvin caught it with around 5 seconds on the clock.

First, Michigan didn’t call timeout. The timeout would have had to come from Beilein to Irvin on the sideline and I’m usually okay with letting these situations play out in an unsettled scenario with with only 5 seconds on the clock.

The best play might have been Abdur-Rahkman putting his head down and attacking the basket, but once he passed the ball to Irvin the play was kind of sunk into one outcome: Irvin shooting.

He was open and his options were the pass it back to Abdur-Rahkman or to the corner to a covered Duncan Robinson. Irvin was open and in rhythm and had been playing well down the stretch and once the ball was passed to him he basically had to shoot the open three or try to get to the rim and beat the buzzer. Do you want a 31% three-point shooter taking that shot, maybe not but you’ll live with an open three.

The next question is whether he shot the ball too early. I don’t think so because if the ball bounces another way maybe Moritz Wagner has a second chance opportunity and if not then Northwestern will need to go the length of the court in about a second.

And then there’s the final play.

Michigan was switching every screen on the play and DJ Wilson and Derrick Walton got caught up in a switch around midcourt. Pardon set the screen and then slipped to the hoop while Wilson stuck with Bryant McIntosh (he wasn’t guarding no one, he ran toward the play after the pass was thrown).

It was a well-designed play, but it was also an incredibly ballsy call. I’m not sure how many guys can throw that baseball pass on a rope like that and if Nathan Taphorn airmails it then it’s Michigan’s ball out of bounds under the offensive basket. The most-likely scenario here is Northwestern to throw the ball to McIntosh curling where he can attempt a 40-footer at the buzzer.

Michigan’s offense was anemic in the first half — 30 points in 32 possessions after a late-run — and stellar in the second — 35 points on 28 possessions. The Wolverines fell down by 11 points midway through the first half and had to get up off the mat with a late run just to make the game competitive. While they felt lucky to be around in the first, it felt like they should be winning by more throughout most of the second, but the late-game execution just wasn’t sharp enough. The Wolverines had some early turnover woes, but the stat that they’ll be kicking themselves about again is 11-of-17 free throw shooting.

Defensively, Michigan stayed in the game early with its ability to force turnovers — the Wolverines outscored Northwestern 11-0 in fastbreak points — but just couldn’t get many stops in the second. Northwestern’s 1.08 points per possession offensively qualifies as one of its better Big Ten performances and they shot 52% on twos and 36% on threes for the night.

Pick-and-roll coverages seemed to give Michigan the most trouble, not necessarily with the direct action, but the second and thrd passes that followed as Michigan defenders recovered from their help. John Beilein noted that Northwestern “shorting” the pick-and-roll in the post game and it’s a trend in the NBA that the Wolverines struggled to contain.

The only good news tonight? There’s only one road game left on the schedule. The various computer ratings systems all love Michigan because it wins big and loses close. As frustrating as that is, its still an encouraging sign heading into the postseason. Still, these mistakes and frustrating losses are compiling and it’d be nice to clean up some of the mess and take care of business on Sunday night in Lincoln.

In terms of Big Ten Tournament seeding, the loss to Northwestern means that Michigan will be playing on Thursday in the Big Ten Tournament — most likely as a 7 or 8 seed — but there’s still plenty of basketball left before we know where exactly they’ll fall.