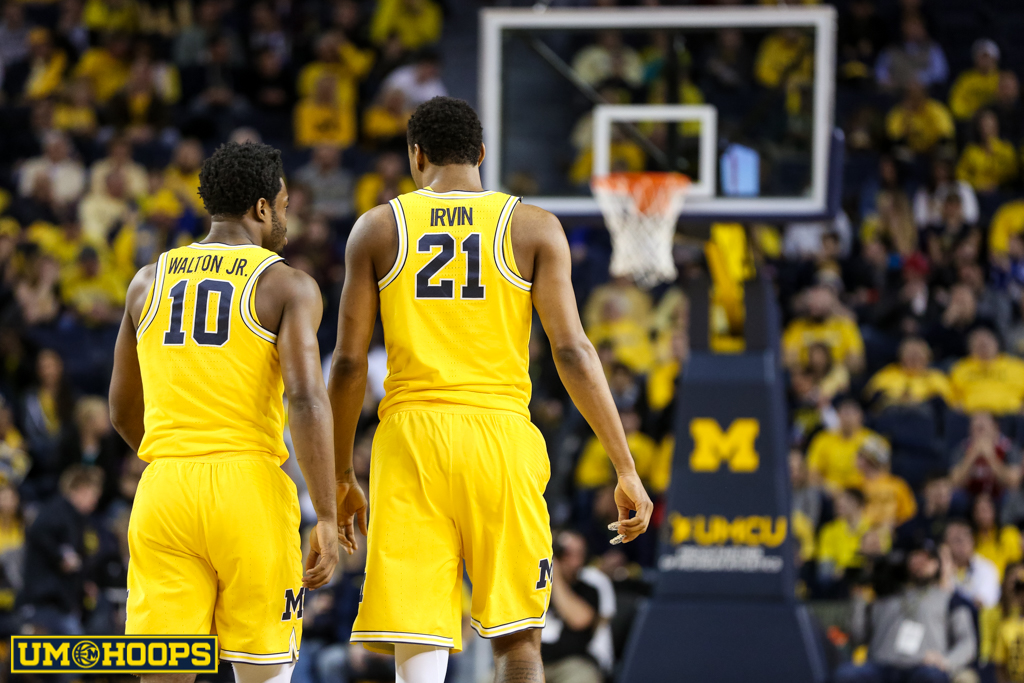 “We’ve got a lot of steel in our spine already,” Beilein said. “We don’t need any more. These kids will keep working on it. We’ve got to find positives out of this game.”

EVANSTON, Ill. — Some of the things that went wrong for Michigan down the stretch against Northwestern weren’t mistakes.

Derrick Walton drove to the hoop on Michigan’s second-to-last possession and wound up taking an off-balance shot, but he’d carried the team in the second half and had success getting in the lane. He didn’t settle for a contested jumper.

On the next trip, with the game still tied, Zak Irvin attempted a three, releasing the shot with under five seconds left. He could have drove, but he was open, had been making his jumpers, and had two teammates crashing the glass.

Some of the things that went wrong for Michigan down the stretch against Northwestern were mistakes.

They shot 11 for 17 from the line (65 percent), the third time in the last four games they’ve been well under their season average. The free throw numbers could have been improved by Moritz Wagner was denied the front end of a one-and-one with 2:10 remaining after Walton was called for a lane violation. While Northwestern’s final play was executed to perfection, defensive miscommunication didn’t help.

So what could Michigan have done differently? Let’s go chronologically through the aforementioned plays. First, the lane violation. Michigan had no potential rebounders lined up as Wagner prepared to take the shot, which was fine by John Beilein. The coach was talking to Walton in front of the bench about how to handle the ensuing defensive possession.

“It was just odd because (the refs) kind of looked at me like they wanted us to have someone at the line,” Walton said. “The ref kind of gave me eye contact. Once I ran in to get on the line he threw the ball.”

“I thought (the ref) would at least hold the game,” Walton said when asked again about the violation. “Moe even looked at us like, ‘Why is no one at the line?'”

The violation occurred as soon as Walton stepped inside the three-point line after Wagner had received the ball. “That was a tough break,” Beilein said, “That’s a first.” While not the exact scenario, Notre Dame lost a 2012 NCAA Tournament game on a lane violation from someone not established on the block.

The way Welsh-Ryan Arena is set up, Beilein had a relatively long walk from his post-game press conference back to the locker room area. On the way, he was trying to make sense of the loss, and eventually ran into official Gene Steratore, who called the violation. Beilein asked for clarification and received it, offering no argument, if a little incredulity.

Next up: Irvin’s three. The senior had been playing really well, settling into a role where he doesn’t force anything but still contributes. Muhammad-Ali Abdur-Rahkman had grabbed the rebound at the other end with 10 seconds left. As he crossed half court, there were two defenders in front of him, and he hit Irvin on the left wing.

“I had an opening to take the shot,” Irvin said. “Thinking back on it, I didn’t realize there was that much time left on the clock. I wish I would have just drove the ball. … We were in the bonus, you never know what can happen.”

Beilein was fine with the play. “I wish Muhammad would have maybe kept going to the basket because they don’t want to foul at that point. I thought (Irvin) had a pretty good look at the basket. … I loved having Muhammad with the ball. We did get a good shot. It would have been fantastic if Zak could have made that; it didn’t happen.”

It was a good look, and perhaps should be left at that. The uncertainty of a ref’s whistle in the final seconds makes the choice difficult. Yes, as Beilein noted, Northwestern would be hesitant to foul and lose the game on free throws. But some coaches feel a player would have to get mugged in order for a foul to be called in the closing seconds, as refs are hesitant to “decide the game.”

Northwestern fans will recall forever that Irvin’s miss left 1.7 seconds on the clock. Each team used a timeout before the inbounds. Beilein was most concerned about Bryant McIntosh getting loose for a jumper.

“They ran a screen,” Walton said, describing the game-winning play. “We were supposed to be switching everything but I didn’t think we needed to switch. Me and DJ (Wilson) kind of looked at each other in the middle of the play, we hesitated, and that was all the difference. The ball went over my head and they had a layup.”

That the 6’1″ Walton was left to contend with 6’8″ Dererk Pardon was, well, not ideal. Walton is a good leaper with a nose for the ball (his defensive rebounding numbers support that), but he was scrambling towards Pardon as the ball was in flight and off balance. Sure, Beilein wishes he’d used an extra defender under the basket instead of guarding the passer, Nathan Taphorn, but that’s only with the benefit of hindsight.

“It was just a fantastic pass,” Beilein said. “Sometimes you just can’t—it reminded me of Christian Laettner’s shot. There are some things, you try to do everything you can. … But it was a perfect play.”

Remember, Northwestern was fighting for its NCAA Tournament life, too, having lost three of four and five of seven entering the game. The Wildcats gave Michigan some gifts, shooting just 8 of 13 from the line including three misses on the front ends of one-and-one tries down the stretch. While Walton’s lane violation was unfortunate, earlier he’d missed the front end of a one-and-one, only to have the refs incorrectly stop play, thinking a second shot was coming. As a result, Michigan was awarded possession and got a layup.

Beilein said his players were “devastated,” and they did appear stunned in post-game interviews, but no team is ever happy after a loss, especially one like this, in March. “That was just a tough one to swallow,” Irvin said.

And yet, Michigan must regroup for Sunday’s regular season finale at Nebraska. Michigan has two overtime road losses (Iowa, Minnesota), plus a three-point loss to Virginia Tech. Don’t forget the three-point wins over Texas and Penn State, though, or the nail-biting victory over Rutgers.

“We’ve got a lot of steel in our spine already,” Beilein said. “We don’t need any more. These kids will keep working on it. We’ve got to find positives out of this game.”