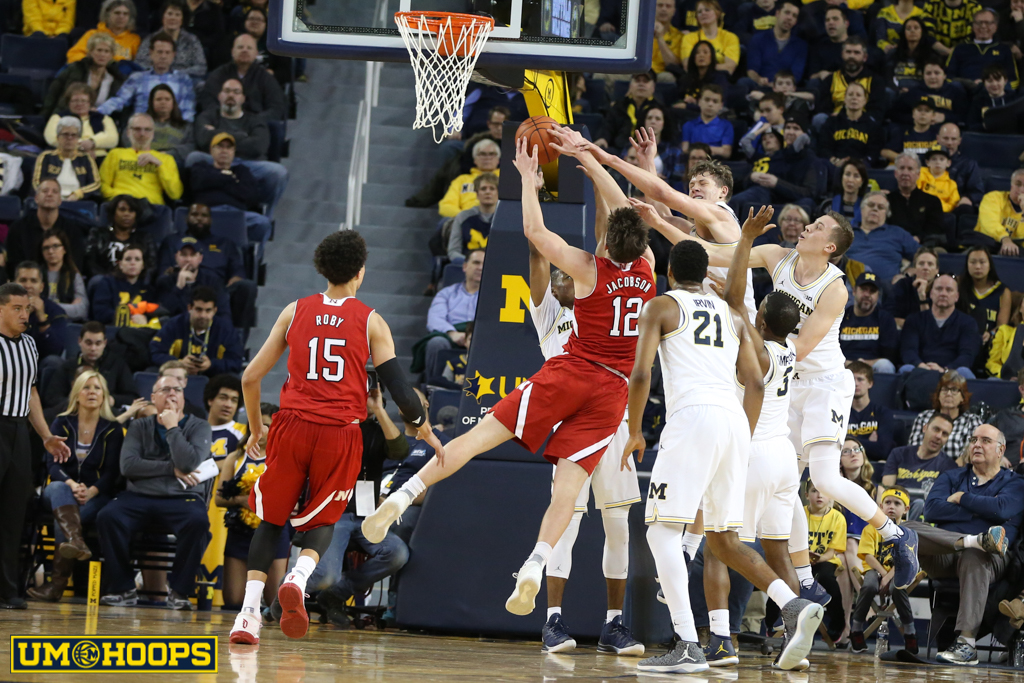 Xavier Simpson may be able to help contain Nebraska’s guards on Sunday.

Despite not taking many shots, it’s hard not to notice Xavier Simpson when he enters the game. He usually comes in around the midway point in the first half and almost always make a quick impact defensively, either with a steal or a deflection.

Earlier in the season he’d often commit or foul or two right away, which didn’t please John Beilein. It wasn’t usually a shooting foul, and Simpson never played enough to get in foul trouble, but it pushed the other team closer to the bonus. Though improved foot work, particularly in ball screen coverage, Simpson is doing a better job of avoiding those fouls.

Offensively, he is getting progressively more comfortable, making the right play in transition, finding cutters to the rim, and taking the open shot with confidence.

“Coach Beilein’s system is pretty tough but once you get the hang of it, you can pick your spots,” Simpson said. He’s played 22 minutes combined the last two games, tallying nine points and four assists, and could play an important role on Sunday against Nebraska.

In the first matchup on Jan. 14, Nebraska’s guards had their way with the Wolverines. That was when Michigan’s defense was still broken. It has gotten better since, but Northwestern beat Michigan off the dribble too often on Wednesday.

“One of the ways we can improve our defense is getting (Simpson) on the floor more,” Beilein said.

Simpson’s focus when he checks in is to frustrate his man and give Derrick Walton a rest.

“I try to be the little fly you can’t get out of the kitchen,” Simpson said. “I just try to guard one of the best guards and try to wear them down. One of my biggest skills, something I’m extremely confident in, is my defense.”

Offense was not a problem for Michigan in the first Nebraska game, a 91-85 win, but it stands to reason the Cornhuskers will try something different this time out. Moritz Wagner hit four triples in that game and, over the past few weeks, has made teams pay that leave him on the perimeter. Northwestern did not leave him (he missed his only three-point attempt), choosing to switch defenders on most of Michigan’s screens.

“People switch to take away (Wagner’s) three-point shot,” Beilein said. “And also so they can get more people around him in the post. If we do get a mismatch in the post, they’ll swarm the post.”

Michigan has been preparing for this counter. At then end of last season, Beilein worked with Wagner on what to do when teams take away his shot. The sophomore’s post game is still under development, as he works to remain calm and yet still make quick decisions.

When there’s a defensive switch on a Walton-Wagner ball screen, there should be two mismatches for Michigan to exploit: In addition to Wagner in the post, Walton will have a presumably slower defender on him.

“The worst mistake our guys make is they start pounding the ball and now they go out of the old triple threat,” Beilein said. He doesn’t mind a three-point shot in that situation, as Walton often prefers, but he wants the guard to get into a triple threat position and attack as if it was a game of one-on-one. Especially if the shot clock is winding down, there isn’t time for a set action.

When Walton gets a big man on him, he said he tries “not to get too antsy” just because he has the quickness edge. “If I have an advantage, our big has an advantage,” he noted. “(The key is) not getting too shot happy, making sure you make the right play.”

Michigan is projected to be in the NCAA Tournament field as things stand today—they’re an 8 seed in the Bracket Matrix, updated Friday morning—but they aren’t among the teams that can absorb multiple losses down the stretch without worry. Beilein, like any coach, plays up the strength of his conference and feels his team deserves a bid as of now. He follows the bracketologists and will root against other potential bubble teams. But that is not the message he gives his team.

“I do not tell them they’re in good shape. I tell them, ‘Your butt is against the wall right now and you’ve got to win more games.’ It’s that simple.”

Beilein is still not exactly sure what happened on the final play against Northwestern. The television feed did not catch the pre-pass action on the other side of half court, so he was planning to have the Wolverines run through the play at practice Friday.

“We’ll go over that last play and get their thoughts on what happened,” Beilein said. “You can’t let that guy get behind us and he did. We’ll learn from it and get better from it.”

Beilein is spooked by losses to Ohio State (Evan Turner, 2010) and Wisconsin (Ben Brust, 2013) in which players curled towards the basket, dribbled, and connected from long range. As for the baseball pass the length of the court: “I was not as worried about that particular play. I better be worried about that in the future.”

When asked about using 7-footer Jon Teske on the inbounds man, instead of 6’9″ Mark Donnal, Beilein said he considered it, but noted the pass was launched well of Donnal’s arms anyway.