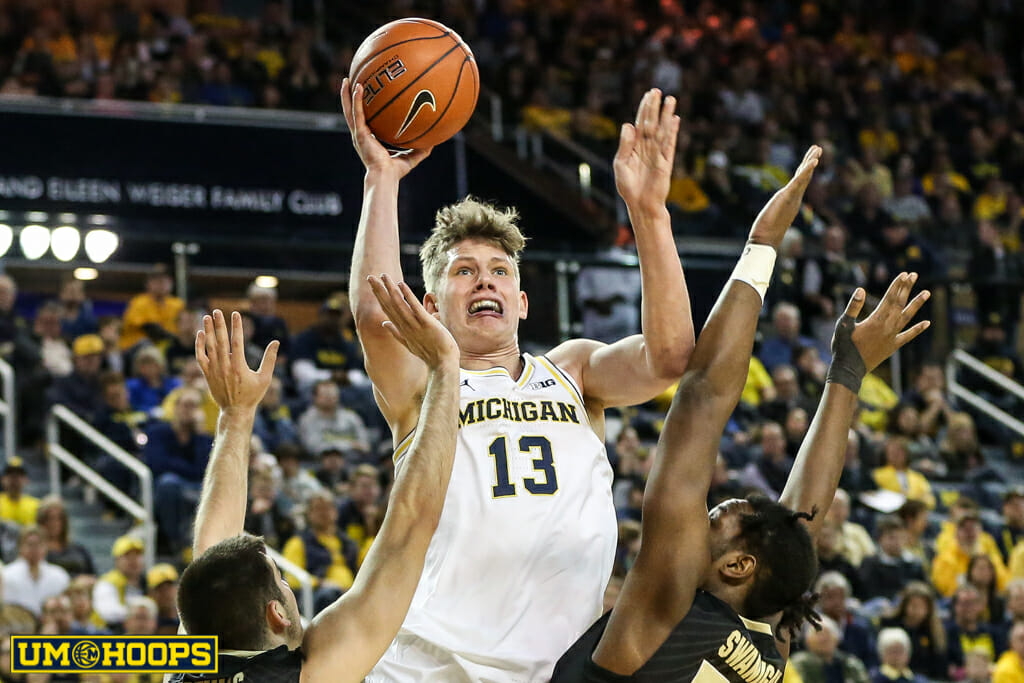 Michigan lost another close game on Wednesday night and could end up with the 8-seed in the Big Ten Tournament, but are there still reasons for optimism down the stretch? Here’s a look at a few encouraging numbers.

Michigan is heading into the final weekend of the Big Ten season with a 9-8 record in league play. The Wolverines could still finish 2 games out of 2nd place, but end up as the conference’s 8-seed due to tiebreakers. It’s been that kind of season in the Big Ten, with 9 teams still alive to finish .500 for better but few relevant national contenders.

Look a little bit closer and some of Michigan’s numbers are more encouraging than at first glance. You’ll see that the Wolverines have lost 8 Big Ten games by a combined 48 points — with just one double-digit loss and two in overtime — and won nine conference games by 111 points. Their average Big Ten win has been by 12.3 points per game and the average loss by just 6 points per game.

That has caused a lot of frustration among fans about Michigan’s road record, late-game execution and everything else, but it also means that Michigan might be a bit better than its record. Ken Pomeroy explains this phenomenon eloquently in his recent blog post looking ahead to conference tournament season

The regular season is filled with storylines about how this team just knows how to win and its better than this other team that lost a few more times. But now’s the chance for the teams who have been told they aren’t clutch or don’t have the character to win on the road to prove the haters wrong. Well, “prove” is not exactly the proper description.

Michigan is going to grade out very favorably in Pomeroy’s Big Ten tournament projections when they are published. The construction of the Big Ten Tournament (not having a double-bye, likely facing Purdue early) will hurt the Wolverines, but for the next month you are going to see John Beilein’s team listed as a trendy upset pick. John Gasaway has already gone in that direction.

The Wolverines are likely to be the 7 or 8 seed in the Big Ten Tournament, but they’ve outscored conference opponents by 5.7 points per 100 possessions. That’s the third-best total in the league, and better than teams ahead of them in the standings like Maryland, Minnesota, Michigan State and Northwestern.

Michigan still could finish as the Pomeroy’s 2nd highest ranked team in this year’s Big Ten, currently checking in at No. 27 nationally, the Wolverines are just 3 spots behind Wisconsin and 14 behind Purdue. That means Michigan could finish with an identical regular season record to last season , but finish over 20 spots higher in KenPom’s rankings. There are no KenPom trophies, but the numbers aren’t irrelevant.

Here’s the thing that’s hard to reconcile when looking back at Michigan’s resume. The Wolverines excel in a handful of areas that you would think translate to late-game success.

Michigan doesn’t turn the ball over and is one of the best free throw shooting teams in the country. The Wolverines are also the best team in the Big Ten in late shot clock efficiency (< 4 seconds) and ranked 4th in after timeout efficiency, per Synergy.

Despite those numbers, the Wolverines have struggled in close games (per TeamRankings) and have been one of KenPom’s most under-performing teams compared to their per-possession performance (his ‘luck’ score). Here’s a look at how those numbers stack up across the Big Ten.

You could argue that Michigan excelling in these statistics is just confirmation that the Wolverines have a good offense, and that’s fair, but it also is a trend that should correct itself over time. Michigan shooting the ball poorly at the free throw line in a couple of road losses is more of a sign of statistical randomness than the Wolverines being a poor free throw shooting team.

Early on in Big Ten play, Michigan was playing defense at a level that was so poor it almost had to be unsustainable. It took 6 games before the Wolverines played one defensive game that was better than the conference average, but since that dreadful start things have been trending in the right direction.

In the meantime the offense has hovered from good to great and has had average performances, but never terrible. The Wolverines are on a 21-game streak of scoring at least 1 point per possession or better and are ranked 9th nationally in adjusted offensive efficiency.

Here’s a look at Michigan’s per-game efficiency numbers combined with polynomial trend lines over the course of the Big Ten season.

The offense has been fairly steady, well above the rest of the league, while the defense is clearly headed in the right direction. Michigan might not be a great defensive team — it is still ranked 13th in the conference overall — but it is at least competitive.

What has changed? The Wolverines are undoubtedly playing better defense on multiple levels. Pick-and-roll rotations have improved and there’s been more consistent effort and focus on that side of the ball. But the most obvious statistic that defines Michigan’s defensive turnaround is 3-point shooting.

Early on in Big Ten play, teams were making over half of their threes against the Wolverines. Since then, those numbers have steadily regressed toward the mean.

Citing another KenPom revelation, we’re all looking at basketball the wrong way when we grade a defense by its 3-point percentage allowed. We should be much more focused on how many 3-point attempts a defense allows. Mathematics say that the actual percentage of threes a team makes is far more random over time than the number of shot attempts allowed.

Michigan serves as a prototypical case study for Pomeroy’s discovery. The Wolverines allow fewer 3-point attempts than any team in the league and their performance has flipped dramatically as those numbers have evened out.

The Wolverines have always attempted as many threes as anyone in the country, but 3-point prevention is a new trend. John Beilein’s teams at Michigan have never ranked in the top-100 in 3PA/FGA allowed, but check in at 12th nationally in 2016-17.

While Michigan was on the wrong side of the three-point luck early on, it has flipped the script over the last two months. More importantly, it has optimized the game to its advantage.

It sounds simple, but Michigan has taken the most valuable shot in the game and maximized its distribution. The Wolverines have fired up 407 3-point attempts in Big Ten games, their opponents have managed only 265.

So Michigan is a great 3-point shooting team and attempts over 8 more 3-pointers per game than its opponents. As a result, it is outscoring its opponents by 156 points (9.2 points per game) from beyond the arc.

There are plenty of reasons why Michigan should be better than its record indicates, but there are other times that it feels like the Wolverines just can’t get out of their own way.

It’s easy to look back on losses against Virginia Tech, Iowa, Ohio State and Minnesota and say that this team could have competed near the top of a weak league or that it should be much closer to a 4 or 5 seed than a 9 or 10, but those games are still losses, even if they should have been won.

In March, on a neutral floor, Michigan excels in several areas that should turn into advantages with the season on the line, but it only takes a couple of late mistakes to pull the plug on an otherwise promising season.