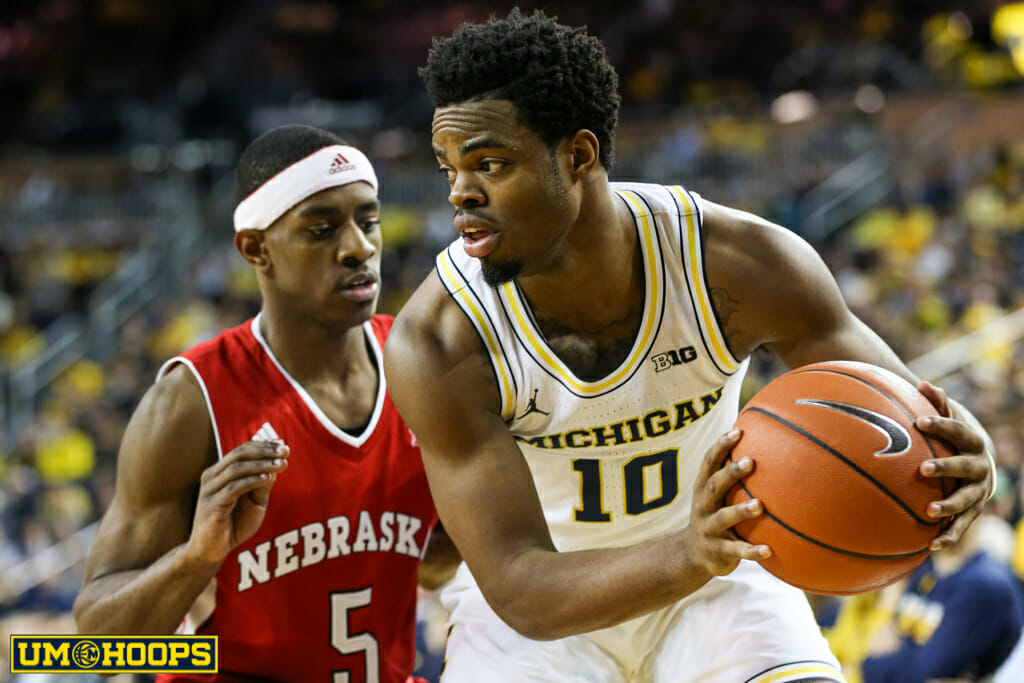 Michigan wraps up the Big Ten season on Sunday night at Nebraska, here’s what to watch for.

“I’d just like to say one thing, I really thought our guards were good. I like this team and I can’t wait to play Michigan again. We’ll welcome them into Pinnacle Bank Arena with open arms and I’m excited for the game already, I wish we could play it tonight.”

That was Tim Miles, unprovoked, after wrapping up his post-game press conference on January 24th moments after the Wolverines beat the Cornhuskers 91-85. That was rock bottom for the Wolverine defense, wrapping up a five-game stretch that saw it allow 1.23 points per possession to open Big Ten play. Since then, Michigan has shown significant improvement defensively, allowing just 1.01 points per possession over its last 12 games.

Meanwhile, Nebraska’s season never quite took off. The Huskers started the Big Ten season 3-0, but have won just 3 of 11 games since and were drubbed by Minnesota 88-73 on Thursday night. Tim Miles finally gets his rematch, but the final game of the Big Ten regular season might not have the importance that he once hoped.

The strength of Nebraska’s offense is its ability to crash the glass and the Huskers rebound 34% of their misses in conference play (3rd). That’s a solid number, but many of Nebraska’s best wins came in some of its worst offensive rebounding games. Like most offenses, Nebraska is best when it is shooting the ball well, but that doesn’t happen often. The Huskers have made just 45.3% of their twos (13th) and 34.8% of their threes (9th) for a 47.2 eFG% (11th).

Nebraska attempts only 28.4% of its shots from three-point range, the second-fewest in Big Ten play, which speaks to its ability to get downhill and attack the basket. Despite that nature, the Huskers get to the free throw line less often than all but 2 Big Ten teams (29.2 FTA/FGA).

Defensively, Nebraska has been beaten by the three-point shot. The Huskers allow 33.7% of their opponents field goal attempts from three-point range (8th) and are allowing a league-worst 41.7% from long distance. Three-point luck could play a factor in these numbers, but there’s only one game left in the season to correct it. Nebraska’s interior defense is more respectable at a 46.6% two-point percentage allowed, but that’s still good for a 52 eFG% (12th) in the Big Ten. Forcing turnover has been one bright spot for Nebraska, which ranks 3rd in the Big Ten in steal-rate and 6th in turnover rate. Finally, the Huskers are just average on the defensive glass and avoiding fouling.

6-foot-4 senior Tai Webster took a little while to find his grove, but he’s been impressive as a senior. Webster uses 29.4% of Nebraska’s offensive possessions and is relentless in his ability to get down hill and attack the basket. In February I noted that he attempted almost as many shots at the rim as some of the league’s best big men and that was tough for Michigan to contain in the first meeting. Webster scored 28 points on 12-of-20 shooting, grabbed 9 rebounds and handed out 4 assists in the first meeting.

6-foot point guard Glynn Watson is smaller than Watson, but he’s a better perimeter shooter (44%) and very comfortable playing out of the pick-and-roll. He’s Nebraska’s most efficient ball screen player because of his ability to shoot off the bounce, even though his overall shooting numbers are a bit lacking. He’s only shooting 41% inside the arc in Big Ten play, but also had a huge game in the first meeting (22 points on 9-of-16 shooting) as the Wolverines struggled to contain him.

6-foot-7 big man Ed Morrow missed the first meeting, his first of 7 missed games in the middle of conference play. The Huskers were 1-6 in Morrow’s absence and he provides a physical presence on the offensive and defensive glass along with a shot blocking threat around the rim. Morrow isn’t great offensively, making just 47% of his twos, and almost all of his offense comes around the hoop.

Nebraska has been constantly shooting for a perimeter shooting threat to stretch opposing defenses and Jack McVeigh has been the best option. McVeigh is shooting 38% from three-point range in Big Ten play and made at least 3 triples in each of Nebraska’s last 3 wins.

6-foot-11, 275 pound freshman Jordy Tshimanga has started the last 9 games and emerged as something of a post-up threat. He’s a load to handle on the offensive and defensive glass and a foul magnet, but he shoots just 47% on twos. He turns the ball over on more than a quarter of his offensive possessions which means he’s susceptible to the double-team, but the bigger question might be whether he can guard Moritz Wagner on the perimeter.

6-foot-7 freshman Jeriah Horne has emerged as another shooting threat to track off the bench. Horne is shooting 33% from long distance, but he’s made at least one triple in 6 of Nebraska’s last 7 games. 6-foot-5 Samford transfer Evan Taylor starts on the wing, and he’s not the most-efficient offensive player — 45% 2-point shooting, 21% 3-point shooting, 20.5% turnover rate — but he’s an active defender who will also take mid-range jumpers.

Despite all of the talk that Michigan is an NCAA Tournament ‘lock’, it would be best off taking care of business in Lincoln on Sunday night. KenPom projects a 70-66 Michigan win, giving the Wolverines a 63% chance at wrapping up the season with a road victory.

To store them in one handy place, here are the Big Ten Tournament seeding scenarios for Michigan: