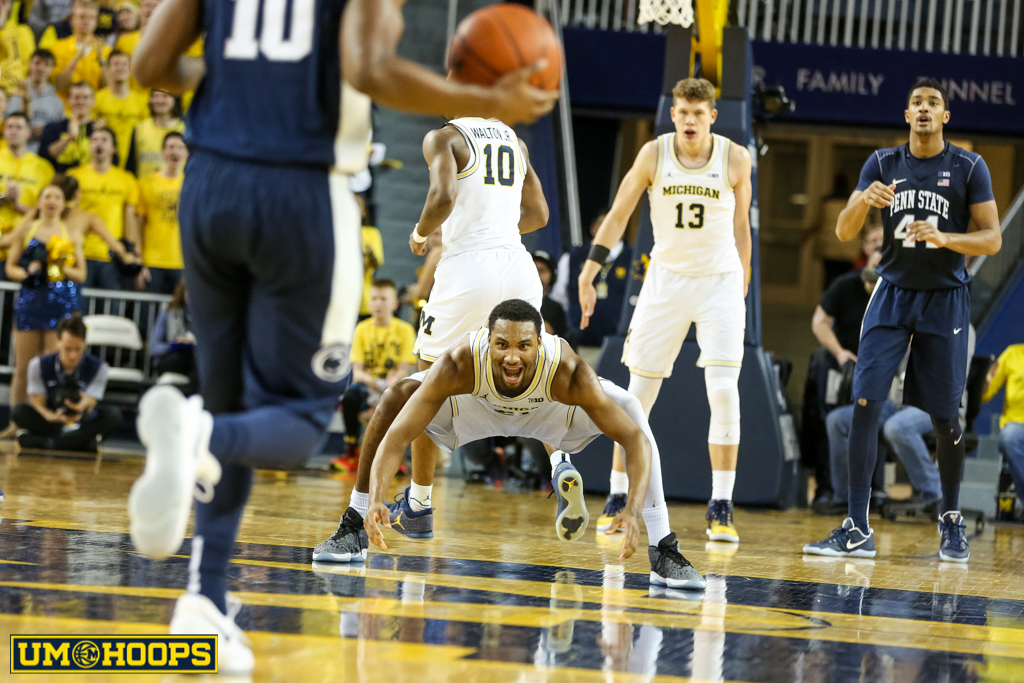 With an improved three-point defense, Michigan is hoping to win its first Big Ten Tournament since 1998.

There is a theory floating around that John Beilein doesn’t value conference tournaments. That, if his team is safely in the NCAA Tournament field, he’d rather lose early to maximize rest and preparation time for the Big Dance. For what it’s worth, on a conference call before the 2014 league tourney, he did say, “Sometimes if you don’t win it all, it’s better to lose on Friday or Saturday.”

This afternoon, Beilein went out of his way to say he wants to win it all.

“We’re telling our kids to pack till Sunday. I’ll probably just bring three suits. I’ll have to wear one twice. I’m going to make sure we pack with the idea that we’re going to stay there and try to win a Big Ten championship.”

Beilein said he adopted that mentality in 2005, when his West Virginia squad won three games to reach the Big East Tournament championship, then got within a game of the Final Four.

“I think when you’re in those situations you need that good mix of ‘one game at a time’ but you can never, even in your mind, relax and do anything but go after it all. That series of events taught me anything can happen.”

Michigan has only won the Big Ten Tournament once, in 1998, the event’s first year. Under Beilein, the Wolverines have won just one game seven times; they won two each in 2014 (to reach the finals) and 2016. Annually, coaches and players talk about the league tournament being “wide open,” but it would seem to apply to the Big Ten this year. Current odds have Purdue as the heavy favorite (3/2), followed by Wisconsin (12/5), Michigan (7/1), Maryland and Minnesota (8/1), and Michigan State (12/1).

While Michigan’s offense has improved as the season has progressed, it’s no secret that the key to the late-season surge has been the defense. And the major part of that, as has been mentioned here, is Michigan’s three-point defense. In the first nine Big Ten games, Michigan allowed opponents to shoot 49 percent from three, which would be six percentage points higher than the best three-point-shooting team in the country. Over the second half of the conference season, Michigan held opponents to just 27 percent from deep (on six more attempts).

Earlier in the year, the close-outs were often short and Michigan didn’t run enough shooters off the line. Help defenders were sometimes giving too much help. All of that has improved thanks to an greater sense of urgency on the defensive end.

Specifically, DJ Wilson has gotten better at defending stretch 4s. These last couple of games in particular, he said, he focused on “running guys off the line, making them make pull-ups, tougher shots, lower-percentage shots.”

Derrick Walton has been important as well. Zak Irvin reminds him every practice that the defense starts with Walton, given that he is typically guarding the player bringing the ball up the floor.

“I try to set the tone and bring some energy to the team,” Walton said. “Not provoking the other guy but letting him know I’m there.”

The Wolverines have experienced first hand, at times, what an aggressive defense can do to even a potent offense. So they’ve extended their defense just enough to throw the opponent off rhythm. Michigan has forced one more turnover per game in the second half of the Big Ten season compared to the first.

Walton was not chosen as one of the five players on All-Big Ten First Team. He should have been, in this writer’s opinion, but he had to settle for the Second Team. Wilson tweeted that Walton was snubbed. Zak Irvin concurred.

“I’ve been saying this for a while now: I feel like Derrick is the best point guard in the Big Ten,” Irvin said. “I definitely think he’s one of the best in the country. I felt a little slighted for him that he wasn’t able to be First Team. But I know with the type of guy he is, he really isn’t worried about individual accomplishments. He’d much rather win the Big Ten Championship.”

That is for sure. Walton, always cautious about providing any bulletin board material for opponents, wouldn’t give any indication if he was upset.

“I really can’t speak upon it because it really wouldn’t change anything,” Walton said. “My mindset doesn’t change. I’m just here to win games. That’s pretty much all I can say about it.”

He wouldn’t say if the voting would provide any extra motivation, but Irvin did. “I think it motivated all of us,” he said. “Everyone is really trying to set a statement for our first game.”