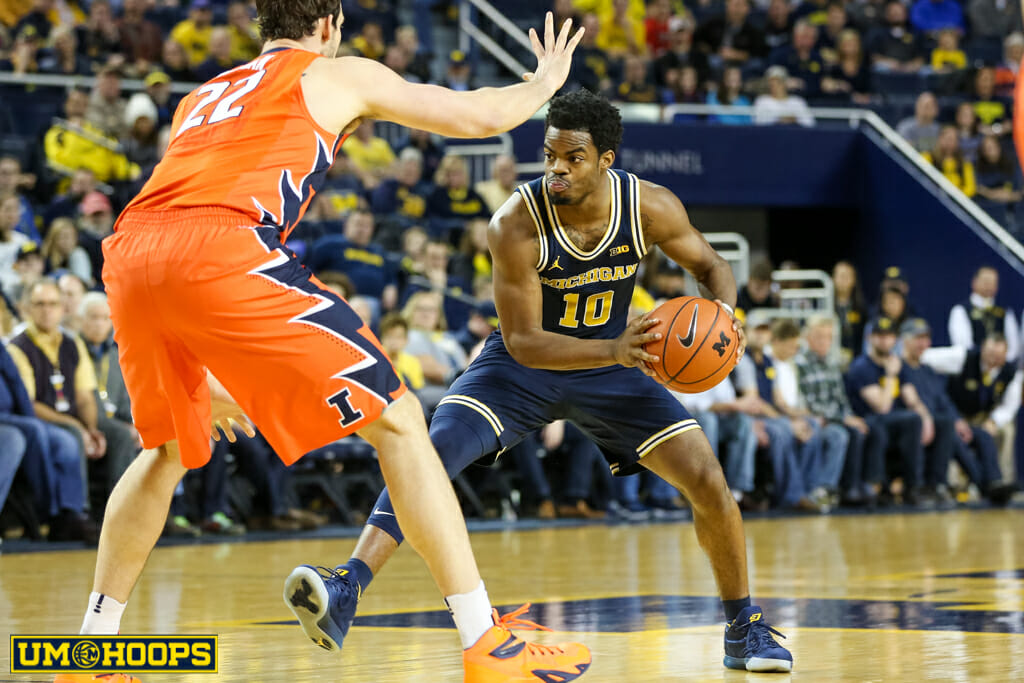 Michigan and Illinois have had an eventful year of head-to-head encounters. The Wolverines suffered their worst loss of the season in Champaign in early January before Maverick Morgan called them a ‘traditionally white collar team’ during postgame media. Michigan players latched onto that quote as motivation to cruise to an easy victory over the Illini in the rematch — a game Michigan led 60-39 with five minutes to play — and haven’t really looked back since.

The Illini torpedoed in late January, dropping 6 of 7 games, but revitalized their season by rattling off four straight victories down the stretch. A home win over Michigan State shifted the conversation to the NCAA Tournament rather than John Groce’s job security, but then Illinois turned around and lost on the final weekend of the season at Rutgers.

The situation for Illinois to make the NCAA Tournament at this point is pretty clear: leave Washington D.C. with multiple wins if you want to have any hope on Selection Sunday.

Illinois has struggled offensively this season, averaging just a point per possession in league play (11th), but it did play its best offensive game of the year earlier against Michigan at 1.41 points per possession.

Illinois shoots just 47% on twos and 35% on threes for a 48.8 eFG% (8th) and is one of the worst offensive rebounding teams in the conference, grabbing just 28.3% of its misses. The Illini don’t get to the free throw line often — 29.1% FTA/FGA (13th) — but do a good job of valuing the basketball. Illinois is very effective in the ball screen game, using 26.6% of its possessions out of the pick-and-roll game while scoring .937 points per possession (including passes) which is good for 3rd best in the conference.

Illinois has been better on the defensive end of the floor, allowing 1.04 points per trip (8th) in league games. The strength of the defense is on the glass, where Illinois grabs 72.3% of its opponents misses (3rd) in Big Ten action. The shooting numbers are more troubling for head coach John Groce. Big Ten teams are shooting 50.2% inside the arc (3rd worst in the league) and 35.1% from three (7th) for a 51 eFG% (8th). Illinois gives up a fair number of threes (34.8% of FGA) and also blocks the fewest shots in the Big Ten.

Senior wing Malcolm Hill put his team on his back down the stretch this season, but just came up a couple of shots short at Rutgers. Hill picked up four-straight KenPom MVP’s during Illinois’ late-season winning streak and is averaging 19.2 points per game over the last 6. He’s a crafty scorer and playmaker who can get to the free throw line by attacking the rim or with an array of headfakes. He’s a good passer and can hit the mid-range jumper, but he’s shooting just 29% from three-point range in league play. For whatever reason it seems like Hill never quite has everything clicking against Michigan over the years, but you can bet he’ll be dialed in facing what could be his last Big Ten game.

Senior big man Maverick Morgan dominated the first meeting and was contained in the second. He’s developed into a fairly complete player as a senior. The 6-foot-10 big man doesn’t use as many post-up possessions as someone like Caleb Swanigan, but he’s been slightly more efficient and used a few more possessions than Indiana big man Thomas Bryant on the low block, per Synergy. Morgan is also a strong offensive rebounder who can finish around the rim, but can also step out and hit the baseline or elbow jumper.  He’s been an emphasis for the Illini of late, averaging over 11 shot attempts per game over the last four.

Sophomore Leron Black starts at the power forward spot and is Illinois’ best rebounder. Like Morgan, he can knock in the mid-range jump shot consistently and has slowly been expanding his range to the three-point line. He made three triples against Michigan State, but his affinity toward the mid-range shot affects his shooting splits at 43% on twos and 36% on threes.

Freshman point guard Te’Jon Lucas broke out in the first meeting against Michigan and has been starting ever since. He’s a good creator and defender (3rd in the Big Ten in steal rate), but he’s shooting just 38% from two and 36% from three.

Sophomore Jalen Coleman-Lands is the epitome of “just a shooter” and it’s interesting to revisit his development compared to current Michigan wing Duncan Robinson as both were signed in the same recruiting cycle. Coleman-Lands played 23% more minutes than Robinson in Big Ten games, but made 39% fewer two-point shots. Robinson was 32-of-71 from three-point range while Coleman-Lands was 37-of-94. The moral of the story: run Coleman-Lands off the three-point line because he struggles inside the arc.

It’s easy to make jokes about sixth-year senior Tracy Abrams still being around, but after watching his feature on The Journey, it’s great to just see him healthy and finishing up a season after back-to-back season-ending injuries. Abrams was slumping early on in Big Ten play, but he’s made 11 of his last 28 threes after starting the league season shooting just 4-of-30 from deep.

Illinois’ frontcourt depth includes stretch big man Michael Finke, who shoots 45% from three in league play, and energy freshman Kipper Nichols. Nichols killed Michigan with his ability on the offensive glass in the first meeting, but he’s also developed a consistent three-point shot as well (10-of-20).

KenPom projects a 69-63 Michigan victory, giving the Wolverines a 70% chance at opening the Big Ten Tournament with a victory.