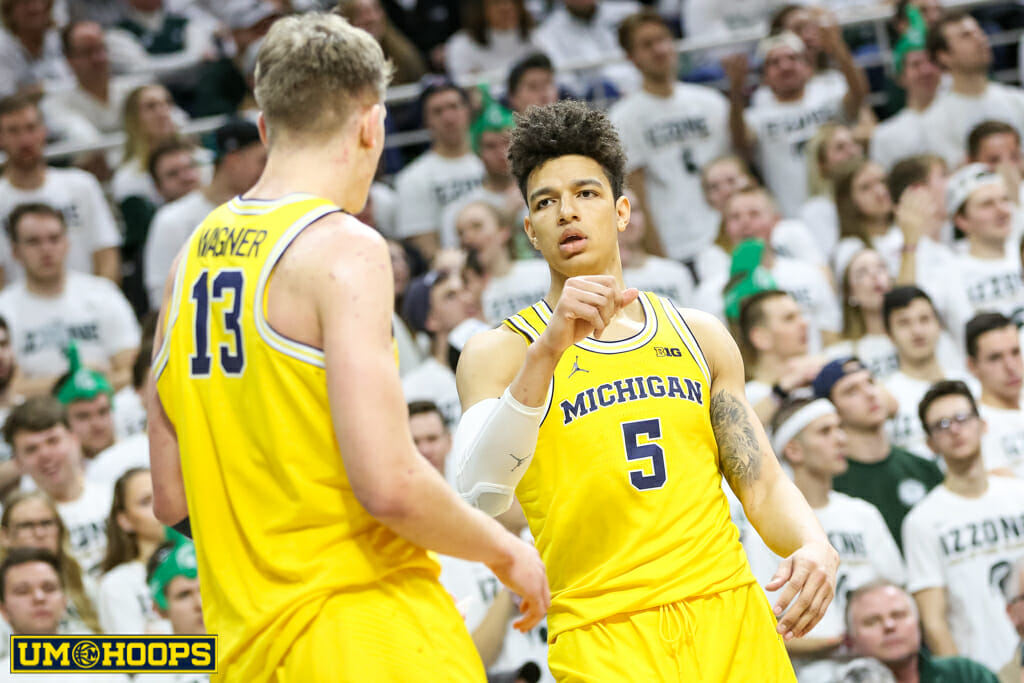 The future of Michigan basketball is here, and it’s nearly 7-feet tall with guard skills.

DJ Wilson drives towards the basket, pivots, and tosses the ball back to Moritz Wagner, [video_lightbox_youtube video_id=”ZpoyHHpEJcU” width=”640″ height=”480″ anchor=”who buries a three”].

Wagner steals a post entry pass, dribbles to the opposite three-point line, and [video_lightbox_youtube video_id=”-ihjW6nT8Go&rel=0″ width=”640″ height=”480″ anchor=”passes to a cutting Wilson for a dunk”].

Wilson handles the ball in the pick and roll, [video_lightbox_youtube video_id=”fsU0xaUg_8k&rel=0″ width=”640″ height=”480″ anchor=”finding Wagner for an easy layup”].

The future of Michigan basketball is here, and it’s nearly 7-feet tall with guard skills.

Wilson and Wagner, Michigan’s starting power forward and center, are having breakout seasons. The sophomores, who went stretches without seeing the court last season, are critical pieces as Michigan enters postseason play. Next year, with starters Derrick Walton and Zak Irvin graduating, the frontcourt duo will be the stars.

Wilson has planned for this moment for years. At Capital Christian High School in Sacramento, California, he would often work out three times a day: before school, after school with the team, and again after dinner. All that training, combined with a major growth spurt, contributed to a stress fracture that left Wilson in a back brace twice. Missing critical AAU tournaments kept him under the recruiting radar.

Wilson, who was ranked 122nd in the final 247Sports composite rankings, became a Michigan target after his strong showing at a July tournament in Milwaukee before his senior year.

He left California amid murmurs that he wasn’t strong enough to play in the Big Ten. For two years, Wilson did little to disprove the skeptics. In the fifth game of his freshman season, [video_lightbox_youtube video_id=”gPdDTN_PXJs” width=”640″ height=”480″ anchor=”his dunk attempt against Villanova was stuffed at the rim”]. It was not only a “welcome to college basketball” moment; Wilson landed awkwardly and hurt his knee, resulting in a medical redshirt.

“That was a blessing in disguise for me because it brought me back to reality,” Wilson said. “I watched it multiple times after.”

He had further motivation to hit the weight room, adding muscle and explosiveness. “Looking back on it, I’m glad that it happened because I don’t think I’d be the player I am today without that.”

The game was still moving too fast for Wilson last year—playing mostly the five spot, he was a liability on defense and tended to drift to the perimeter on offense—and he averaged just three minutes per game in Big Ten play. After the season, three Wolverines that arrived in Ann Arbor with Wilson left the program to play elsewhere. Wilson never considered it.

“Even though last year was a tough year for me, especially towards the end when I wasn’t playing a whole lot, I was getting ready for this year,” Wilson said. “I told Coach (John) Beilein he had my word from the beginning. I was going to be loyal to the program and prove myself like I’ve been trying to do since Day One.”

The difference this season has been Wilson’s willingness to accept his role. At Capital Christian, head coach Devon Jones had to get Wilson, who considered “center” a bad word, to buy into playing in the paint. Though Wilson could shoot and dribble, his value to the team wasn’t on the perimeter.

It was a lesson he had to learn again at Michigan. In a practice before last season, the 6’10” Wilson told Beilein he preferred to “pick and pop”—instead of setting a screen and rolling towards the rim, he’d linger outside the three-point line. Beilein brought Wilson into his office and called Jones, who chuckled and said, “I think what DJ means to say is that he’s going to do whatever you want him to do.”

It’s a moment all parties can smile at now, especially since Wilson has been so receptive to coaching this season. “They just needed somebody that had size and length to play down low and get garbage baskets,” Wilson said. “I didn’t see it at first. It wasn’t until this past year I really opened my eyes and realized if I wanted to get on the court, those are the things I needed to do and the rest would take care of itself.”

Wagner went through a similar, if somewhat expedited, process. Like Wilson, he was recruited to Michigan because he possessed great skill for his size. While Beilein wasn’t going to stick him under the basket, he needed his 6’11” center to defend 250-pounders and rebound. Growing up in Germany and playing mostly for the Alba Berlin junior team, those responsibilities were not always stressed.

And so, despite a 19-point performance early last season against Charlotte, Wagner’s minutes in Big Ten play mirrored Wilson’s. Then, in Michigan’s biggest games of the year, Wagner found himself in the middle of the action. He played a key role in a Big Ten Tournament upset of top seed Indiana and against Tulsa in the NCAA Tournament, where he grabbed a season-high eight rebounds and blocked twice as many shots (four) as he had all year combined.

“This is what I can do, this is what I’m here to do,” Wagner told himself after those performances.

He earned the starting job to open this season and hasn’t relinquished it. Opposing coaches scrambled to game plan for Wagner as he knocked down threes and took less agile defenders off the dribble. After the Texas game, in which he made the winning plays on both ends of the court, Texas coach Shaka Smart said, “I thought Wagner was terrific. I thought he was the best player on the floor today.”

By the third game, against Marquette in Madison Square Garden, Wilson joined his roommate in the starting lineup and posted his first career double-double. “For (Wilson) to protect the rim like he does, offensive rebound like he does, and be able to move on the perimeter, too—he’s a unique player,” Marquette coach Steve Wojciechowski said.

Their ability to shoot from the outside—Wagner has made 41 threes this year at a 43 percent clip; Wilson 31 at 38 percent—has elevated Michigan’s offense into one of the nation’s best. When all five guys on the court can shoot, it puts a lot of stress on the defense.

Wilson is still learning to play through contact and not disappear, especially on the boards, for stretches. Wagner is working on handling a secondary defender, whether he’s in the post or driving to the hoop. He said the next step in his offensive evolution is “to develop a calmness. Being able to see the situation developing while you’re doing it. … It can’t be either I score or I turn it over.”

Wagner’s German coach for several years, Konstantin Lwowsky, echoed what Beilein has often said this season: “His style of basketball kept you always paying attention to him,” Lwowsky wrote in an email. “Because you never knew if something great would happen or maybe something stupid.” At this he adds a smiley face emoji. And to be fair, the ratio of Wagner’s jaw-dropping plays to head-scratchers continues to improve.

Channeling his emotions is also a focus. Encouraging the Maize Rage to get loud is great; arguing with refs or letting one bad play lead to another, not so much. Wagner will sometimes not recognize himself on film, ashamed of his antics. For the most part, though, he provides his teammates with much-needed energy.

“He’s a fun guy to be around,” said forward Duncan Robinson. “He’s as competitive as they come, but he understands it’s college basketball; it’s fun.”

The future is now

There’s a mutual appreciation between Wagner and Wilson, on and off the court. Wilson is grateful to play with another big, which allows him to slide to the power forward spot, where he’s more comfortable. Wagner said it’s helpful to be out there with a great shot blocker (Wilson is first on the team with 43 blocks; Wagner is second with 14). Then he realizes what he’s saying, laughs, and adds, “I shouldn’t say that as a big man, that I have a shot blocker on the team. I should be the shot blocker.”

Their dorm rooms were next door to each other last year and this year they are roommates. They watch a lot of hoops together and find one another amusing. “He’s a character,” Wilson said. You see him on the court with all these expressions and being extra dramatic. He’s the same way off the court.” Wagner was teased for describing Wilson as “weird” in a television interview, but he meant “unique.” “He’s so funny and stands out,” Wagner said of Wilson, who wears short shorts and whose hair has its own Twitter account.

The fan favorites are also starting to catch the eyes of NBA scouts, who have been calling Wilson’s high school coach to inquire about, among other things, his character (they receive a glowing report). Neither appears to be a threat to bolt Michigan just yet, but they have the potential to reach their goal of playing in the league, a pleasant surprise for a pair of players who each averaged 2.9 points per game last year.

Getting to the next level, Beilein believes, would mean improving on skills that would help Michigan now and in the future, most notably spending more time near the basket on both ends of the court. Both players understand that.

“He’s so coachable,” Beilein said of Wilson. “He’s on a mission to be the best player he can be to help this team.” He says often that Wagner is a terrific kid who is loved by everyone in the program, and that he has a will to win that rivals any player he’s ever coached.

Walton and Irvin, the focal points for Michigan’s offense for so long, are playing their final collegiate games. Before they hand the reins to the young bigs, there is a Big Ten Tournament to be played. The Wolverines are a threat to win, and make some noise in the NCAA Tournament, because they’re blending their present with their future at the right time.