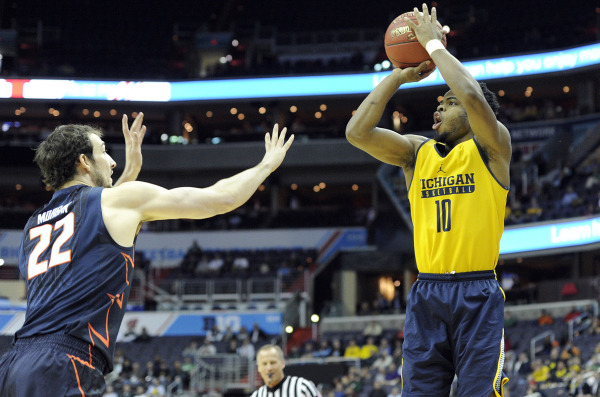 This space almost universally focuses on basketball minutiae and the statistical nitty-gritty of a given Michigan game, but stats and analysis never felt less relevant than on Thursday afternoon in the Verizon Center, watching warmups and listening to stories about Michigan’s airplane evacuation that occurred less than 24 hours earlier.

This space almost universally focuses on basketball minutiae and the statistical nitty-gritty of a given Michigan game, but stats and analysis never felt less relevant than on Thursday afternoon in the Verizon Center, watching warmups and listening to stories about Michigan’s airplane evacuation that occurred less than 24 hours earlier.

But for a Michigan team that had been on an emotional rollercoaster over the last day, there was nothing better than a basketball game to return to normal. Michigan showed up at the Verizon Center at 10:40 a.m. for their scheduled noon tip-off and was ready to play, even if it didn’t have game uniforms.

If Illinois expected a worn out Michigan team due to the travel issues, they couldn’t have been more wrong. The Wolverines quickly jumped out to a 14-4 lead and never looked back. They’ve started to make a habit of decisive blowouts and this 75-55 win was no different.

In his post-game comments, John Beilein marveled at Michigan’s execution when evacuating the jet before joking that “if our kids could execute like that all the time, we’d never lose a game.” A few questions later, he was asked about his team’s hot start and praised how connected his team was on the floor, even without their standard routine.

He might not have realized it at the time, but the team that got itself off an airplane on Wednesday and beat Illinois on Thursday are the same team, and they continue to play some of the best basketball in the Big Ten.

Michigan’s defense has been good over the last month and change, but it was great on Thursday afternoon. The Wolverines held Illinois to just .89 points per possession and their aggressiveness in the passing lanes forced 14 turnovers. Really the only complaint about Michigan’s defense was that it just couldn’t keep Tracy Abrams out of the paint. He scored 23 points on 13 shots while his teammates managed just 32 points on 35 shot attempts.

Michigan didn’t just force turnovers on 22% of Illinois’ possessions, it also rebounded 85.2% of the Illinois’ missed shots on the night. Nothing leads to transition offense better than clean rebounds and live ball turnovers and the Wolverines outscored the Illini 12-0 in that department. Michigan has one of the best halfcourt offenses in the country and teams that give up double-digit, basically free, points in transition make it almost impossible to stop down this group.

The Wolverines shot 68% on twos for the afternoon and put the ‘white collar’ comment to bed once and for all as they outscored Illinois 30-24 in the paint — the starting big men for the Illini combined for 4 points and 7 rebounds — and 6-2 on second chance opportunities. The threes were falling early and late, but Michigan’s 9-of-25 (36%) perimeter shooting was otherwise fairly pedestrian.

In the halfcourt, Illinois tried to defend the Wolverines by switching every ball screen and we’re reaching the point where it might be time for opposing coaches to try something new. Beilein noted after the game that they’ve seen this consistently over the last few games and that it really simplifies the game. The Wolverines look for situations to attack — what Beilein calls leverage — and just ‘play ball’ or attack mismatches one-on-one. It’s becoming very clear that asking your big man to try to defend Derrick Walton on the perimeter without any help isn’t a winning strategy.

The Wolverines are playing their best basketball of the season and there’s no better time to do it. I would have felt pretty comfortable putting a ceiling on Michigan’s postseason hopes 6 weeks ago, but right now I have no idea what to expect over the next few weeks. When this group plays with this much confidence, intensity and focus on both ends of the floor, who can’t they beat?

Next up is a rematch with Purdue. By the efficiency margin stats, this will be a battle of the Big Ten’s two best teams that just happens to be played in a Friday afternoon quarterfinal. Michigan won the battle of the mismatches in the first meeting, but repeating that performance in a back-to-back on a neutral floor will be difficult against a well-rested Purdue team.