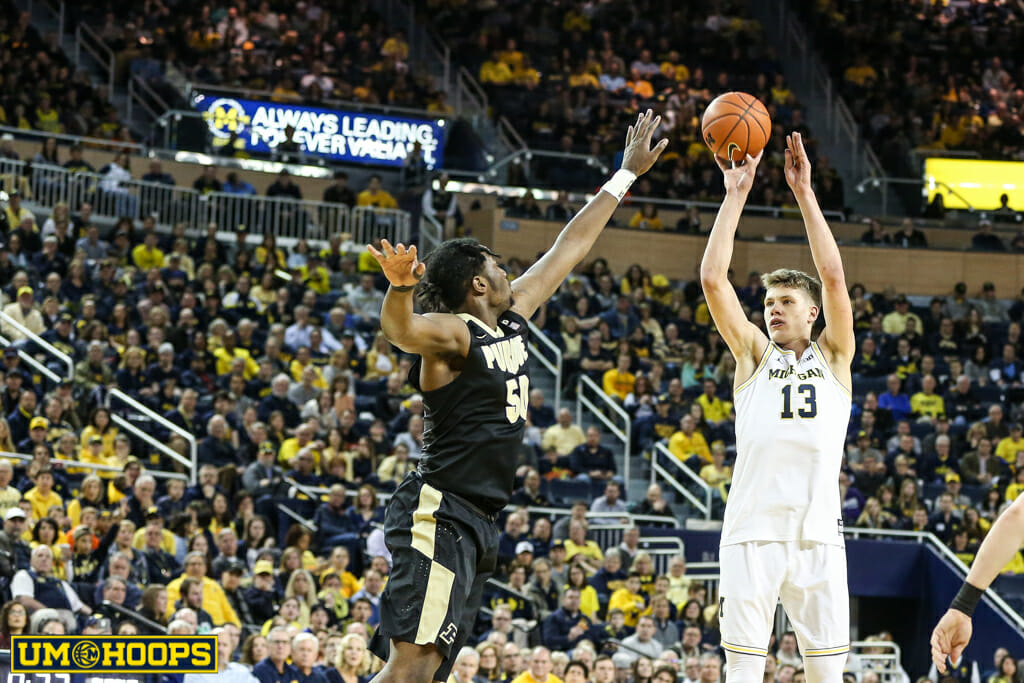 Michigan will face Purdue in the Big Ten Quarterfinals on Friday afternoon at noon (ESPN) and there are a number of intriguing mismatches and strategy decisions to be made by both coaching staffs. Here’s a closer look at the game.

Michigan and Purdue met just two weeks ago in a game that I previewed and recapped at the time. I’d also recommend listening to Matt Painter’s press conference after that game because he did a good job explaining a lot of what happened in that game the reasoning behind the decisions that he made.

With the short turnaround — Friday’s tip-off is scheduled for 12:00 p.m. on ESPN — we’ll focus on a few key areas of the game that should decide Friday’s rematch.

This is the mismatch that will determine who plays on into the Big Ten Tournament. Purdue’s side of the equation is strength, braun and force. Caleb Swanigan is a National Player of the Year Candidate for good reason and Isaac Haas is one of the biggest players in the Big Ten. They are both great post-up scorers, they both can pass out of double-teams and Haas undoubtedly left points on the floor as he went 4-of-10 from the field in the first meeting.

While Swanigan scored 18 points on 8-of-11 shooting in the first match-up, he also turned the ball over five times. Most importantly, neither Swanigan or Haas really had any chance of defending Moritz Wagner in space. Wagner was dominant and scored inside and out, finishing with 24 points on 10-of-15 shooting in one of his best showings in the year.

“Obviously Wagner had a great game,” Purdue coach Matt Painter said after the first meeting. “He was the difference, not just in the first half but the whole game. His ability to stretch the defense and their ability to find him and match-up. Obviously he’s a very skilled guy, he can drive the ball, shoot threes. Very talented.”

I can only imagine how many times Purdue has watched these Wagner made baskets and tried to figure out how to stop him. It’s pretty clear that on that night, Swanigan just couldn’t check him one-on-one.

The bad news for Michigan is that as well as Wagner played at Crisler, he’s probably not going to be able to completely repeat that performance. Haas, who shoots 56% on twos, probably isn’t going to go 4-of-10 on shots around the basket again.

“We can flip it on them,” Painter said of the low post mismatches. “But when you don’t score the ball at the rim, I felt like we had a lot of opportunities for Haas in there — missed dunk, layup, little hook — that he usually makes. If we could have made those plays and a couple of drives, we could have lived with all of it.

2. Run shooters off the line

Michigan has excelled over the last month or so at running shooters off the line and limiting three-point attempts. Purdue made just 5 triples on 16 attempts in the first meeting and four of them were by Carsen Edwards, the least efficient three-pointer shooter in the Boiler rotation. Dakota Mathais (2 attempts), Ryan Cline (2 attempts) and Vince Edwards (1 attempt), Purdue’s primary perimeter shooting threats, didn’t just not make shots, they didn’t even have many attempts.

Purdue leads the Big Ten in three-point percentage at 40% from distance and attempts 37.8% of its field goals from long range. Despite their reputation as a power team, this Boilermaker team can shoot the ball as well as just about anyone in the league.

That defensive execution worked, but holding Purdue to five made threes when it has such talented post-up passers on the block will be difficult to accomplish again.

Michigan has done a terrific job of bringing help and double-teams at the right time and from the right angles. The result has been a defense that suddenly does a really good job of forcing turnovers. Purdue has been just average in that area this year — 7th in the league with a 18% turnover rate — and had some key giveaways at critical times in Ann Arbor.

Late in the Big Ten season, teams have been aggressively switching every ball screen against Michigan. Illinois did it all game on Thursday and Purdue made the same adjustment in the second half of the first matchup.

To hear both coaches talk about the pros and cons of switching really illuminates the chess match at play in terms of strategy. Painter summarized it succinctly in his postgame presser in Ann Arbor.

“Switching stops your (opponent’s) action,” he explained.”But it doesn’t give you the best mismatches.”

John Beilein spoke on Thursday about how much the Wolverines have worked on attacking these situations because they’ve seen so much of them.

“We continue to see it,” Beilein said of the the switch-everything defense. “This is maybe four or five games in a row that they’re switching every single ball screen. So you are trying to get leverage, trying to create opportunities. That’s all we’ve been working on every day is when people switch ball screens and how we attack it. We did draw up some things, Jeff Meyer does a great job of that to put us in position, but basically we played a lot of ball today.”

‘Playing ball’ means letting guards attack downhill and make a play against a bigger defender. Why is that — basically ISO ball — such an effective decision? Because the switch turns help defense on its head.

“We just went and switched everything and knocked them out of their action,” Matt Painter said after the first meeting. “The downside of that is that now you have your bigs guarding their guards and they can break you down off the dribble, then you have to help and now you have to get to their shooters. When you have a good point guard and you have bigs that are skilled and can spread you out, you have to pick your poison.”

Even if they don’t finish, Michigan’s guards getting downhill against Purdue’s bigs, or even Vince Edwards at that spot, will yield better kick out opportunities and better opportunities across the offense.

DJ Wilson hasn’t been playing his most consistent basketball over the last few weeks, but he could be the key cog against Purdue. Assuming that Purdue does put Vince Edwards against Moritz Wagner — a move that makes the switching defense more practical because Edwards has a better chance of staying with guards — then Caleb Swanigan will be guarding Wilson.

That means that all of the action that Michigan drew up for Moritz Wagner to open the game against Purdue can also be run out of the 1-4 pick-and-roll with Walton and Wilson. Wilson might not be quite as aggressive off the bounce as Wagner, but he can hit open pick-and-pop threes if you are going to give them to him.

You can’t blame Purdue for taking this approach considering that while Wilson is very efficient overall, he’s still inconsistent. He has games when he’s locked in and almost dominates, but other games where he floats. If you had to pick one Wolverine to try to beat you, Wilson is an easy target.

Mismatches are only valuable if they can stay on the floor. Wagner was whistled for just 3 fouls in 27 minutes in Ann Arbor and if he picks up two early fouls then the Wolverines could be in a world of hurt.

Foul trouble for Wagner doesn’t just mean that Michigan’s offense takes a hit, it means that Purdue can also double-down inside and go with the twin post look and play Isaac Haas for significant minutes and grind down the Wolverines.  Haas played only 11 minutes in Ann Arbor and Donnal played 6. Look for Purdue to play Haas sparingly except when Donnal is on the floor, because Donnal is the one Michigan big that Purdue is comfortable with Haas guarding.

KenPom projects a 72-70 Purdue win, but gives Michigan a 43% chance at the neutral court upset.