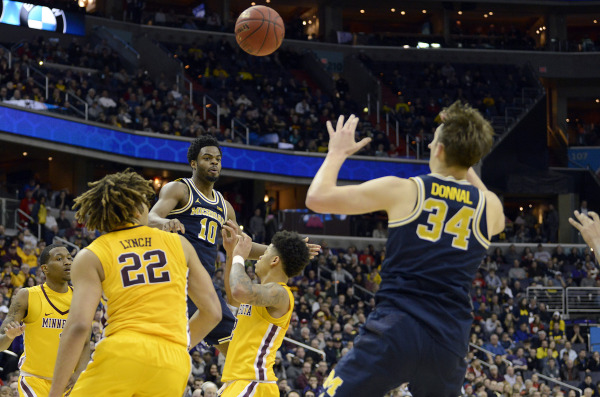 Derrick Walton carried Michigan to another win on Saturday afternoon and the Wolverines are one game away from the Big Ten Tournament title.

Down the stretch, nobody in the league was playing better basketball, but no one seemed to notice in earnest. When Nate Mason’s name came up on the All-Big Ten First Team instead of Derrick Walton it was all the more clear: Michigan was off the radar.

After 34 games, it’s clear that this is a team that plays its best when its been doubted or questioned. The Wolverines are 4-0 in revenge games, knocking off Illinois, Wisconsin, Michigan State and now Minnesota after losing their first meeting. There are no two-game sweeps on this resume.

Everyone in the Michigan locker room knew that Derrick Walton was the best point guard in the Big Ten before the semifinal started and they let him know that he needed to prove it. Everyone in the arena was up to speed by the time the final horn sounded.

Walton dominating the game in a way that only a great point guard with complete confidence can. He recorded six assists before he scored his first points, but finished as the game’s leading scorer. Late in games it isn’t John Beilein drawing up plays, it’s Walton calling the shots.

“We have the same mindset it’s just I get to see it from a different lens because I’m on the court,” Walton said. “And he trusts me, he trusts me completely. I know for a fact that he has complete faith in me.”

When Walton hit back-to-back-to-back stepback jumpers to help the Wolverines pull away, that was just Walton reading the defense and making a play. The beautiful pick-and-roll assist to Mark Donnal late that followed was just another call by Walton after he saw something in the Gopher defense.

The days left in Derrick Walton’s career are numbered and there’s no more time to defer. He told reporters after the game that he has winning the Big Ten Tournament written down as a goal on a “little piece of paper in his dresser” and when his head coach drove him to the airport last week before a trip to Nebraska, he told him: Michigan was going to win the Big Ten Tournament.

Who would question the senior point guard now? He’s only 40 minutes away.

Michigan scored 1.21 points per possession against the No. 15 defense in the country to push its adjusted offensive efficiency up to 5th nationally. It’s not about Michigan’s offense clicking isn’t about hot or cold three-point shooting — the Wolverines were just 8-of-23 on the afternoon — it’s about generating easy two point baskets. The Wolverines were 21-of-31 inside the arc as they picked apart the best eFG% defense in the conference.

It helps to have a point guard that can make just about every pass on the court, but if Michigan gets its four or five baskets off back-cuts, three or four for the roll man and a couple other easy ones in transition then average three-point shooting and a few big shot clock shots by Walton or Zak Irvin are all that’s left for an impressive offensive game.

There are just too many weapons on the floor — all of which can shoot — for teams to match up with this Michigan team properly. Beilein noted after the game that his focus has shifted from worrying about Michigan’s weaknesses to focusing on its strengths. Michigan’s five starters have all looked like the best player on the court at different times over the last 125 minutes of basketball in Washington D.C. and that’s a scary proposition.

Free throws were Michigan’s undoing in Minneapolis, but the Wolverines went to the charity stripes 22 times — with 18 makes — to Minnesota’s 14 as they won that head-to-head battle. Walton’s ability to draw fouls in late clock situations was particularly impressive as he finished 10-of-10 at the line.

This was the worst defensive game that Michigan has played in a few weeks. Minnesota’s ability to attack off the bounce — Beilein noted that it’s particularly difficult to face left-handed guards — left the Wolverines constantly over-helping. Dribble penetration leads to easy baskets at the rim, but it also leads to weakside rebounds after the big is drawn to help. Minnesota rebounded 42% of its misses, which was Michigan’s worst defensive rebounding performance since the Ohio State loss.

The importance of finishing the job on Sunday to this team is pretty obvious. The regular season might not have gone quite as expected, but leaving the floor with a trophy and a banner on Sunday would be an accomplishment for a group that has put everything together in a way many never saw coming. It will be matchup No. 3 with Wisconsin after the Badgers dismantled Northwestern 76-48. The Badgers have been Michigan’s kryptonite for most of Beilein’s tenure, but that Michigan also knocked them off in the last meeting.

The number next to Michigan’s name on Sunday evening is also at play. It feels like conference tournaments have had radical impacts on seeding in the past and Michigan presents an intriguing case. A couple of weeks ago they were a bubble team, now they are up to a 6-seed in Joe Lunardi’s latest projections. A win over Wisconsin would be Michigan’s 6th over a top-50 team and 13th top-100 win and it would be hard to rank teams like Minnesota and Wisconsin — who are currently hovering on the 6-line — above them.