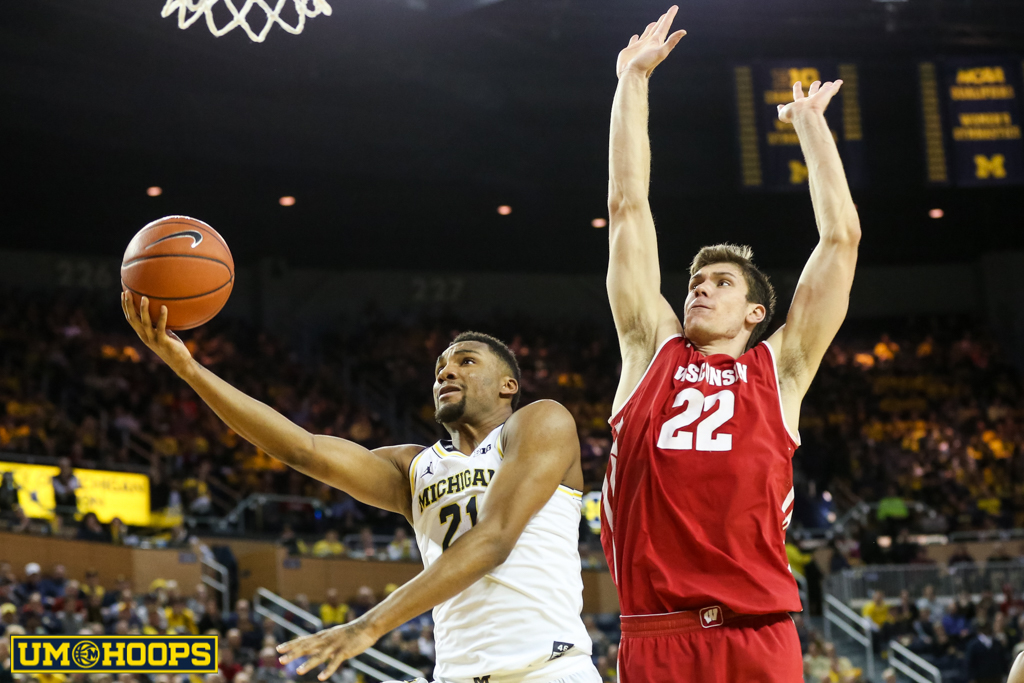 Michigan and Wisconsin will play a rubber match for a Big Ten Tournament championship on Sunday afternoon (3 p.m., CBS). The Wolverines and Badgers played two games to a almost a perfect split with an aggregate score of 128 to 126.

Michigan and Wisconsin will play a rubber match for a Big Ten Tournament championship on Sunday afternoon (3 p.m., CBS). The Wolverines and Badgers played two games to a almost a perfect split with an aggregate score of 128 to 126.

The Big Ten Tournament title will feature the two most experienced teams in the league, but also of two dramatically different teams. The Badgers have the league’s best defense and play inside-out while Michigan leads the league in offensive efficiency and spreads the floor.

Wisconsin is one of the elite post-up offenses not just in the conference, but in the country. The good news is that Michigan has repped its post-up trap and double-team looks quite a bit in the last couple of weeks with two games against Purdue, the bad news is that it is still a significant mismatch overall.

Wisconsin trails Purdue in post-up offense volume, but is just a fraction behind and is just about as efficient as the Boilermakers’ twin towers on the block. Here are the top six post-up offenses (including pass outs) in Division I by volume, per Synergy, with their efficiency measures.

Happ scored 22 points on 10-of-13 shooting in Ann Arbor and the decision to play single or double coverage against the Badger post threat is the most important question. Michigan played mostly single coverage in Madison and Happ went 5-of-13 from the floor. Here’s a look at his shot attempts in the first meeting:

The Wolverines might have had a little irrational confidence from that first meeting and opted to play single coverage to start the second meeting. Happ promptly dropped 18 first half on 8-of-9 shooting and forced the Wolverines to adjust. A reminder of how that looked:

A more aggressive double-team worked in the second half as Happ recorded more turnovers (3) than made field goals (2) in the second and Michigan held the Badgers to 2-of-18 shooting to close the game. The key for the Wolverines doubling is to try to speed the Badgers up and create some turnovers in passing lanes that can lead to offense, an example:

Michigan’s post defense scheme is the single most important element to this game and the answer is probably changing looks as often as possible to try to keep the Badgers off balance.

Wisconsin has the best defense in the Big Ten and it’s a defensive system that has slowed down John Beilein’s offense more consistently than any other.

The Wolverines managed just a shade over a point per possession in both of their games against the Badgers. 64 points on 63 possessions in the first meeting and 64 points on 62 possessions in the second. That’s basically the floor for this Michigan offense — and a really impressive floor at that — but it is a reminder that it’s just really hard for Michigan to manufacture points against the Badgers.

The Wisconsin defense is so effective because it forces you out of your comfort zone. Teams run offense designed to get the shots that they want, but usually end up taking the shots that Wisconsin wants. Generally that’s a mid-range jumper or tough isolation plays. How tough is it to create easy offense versus Wisconsin? Northwestern recorded just one assist in the first 32 minutes of clock time on Saturday.

Bronson Koenig has played 63 minutes this week, Derrick Walton has played 117. Irvin has racked up 119 minutes himself and will be banging against the bigger, stronger Nigel Hayes who has only clocked 57.

Michigan not only was in a plane accident on Wednesday, they’ve played an extra game and more competitive games. Wisconsin has only played twice and drilled Northwestern by 28 points which allowed it to not play a single starter more than 33 minutes on Saturday.

Rest isn’t everything and Michigan players have mastered the company line that fatigue is 50% physical and 50% mental, but it is still a distinct advantage for the Badgers.

“We know they’re playing hard, playing inspired, playing well right now. If they’re going to be a little tired, we’ll definitely take it,” Nigel Hayes said on Saturday. “We don’t want to run around like spring chickens or anything like that.”

I wrote in the Minnesota recap that Michigan had the most to prove in Washington D.C., but Wisconsin could make a case as well. It’s easy to forget, but Wisconsin was 10-1 and a legitimate Big Ten title contender at 10-1. Then the Badgers lost 5 of their final 7 games as the offense basically ground to a halt.

Late in the year, Wisconsin’s offense was almost as bad as Michigan’s defense was early in the year. Wisconsin had a 7-game streak with an eFG% under 50% and Bronson Koenig missed time (including the game in Ann Arbor) with a leg injury.

The Badgers have figured things out in D.C., churning through a pair of victories while scoring 1.19 points per possession. Three-pointers are falling (22-of-51 over two games) and even Ethan Happ is hitting free throws (8-off-11 vs. Northwestern).

Seven different Wisconsin players made a three on Saturday afternoon and four starters made two each which is world’s away from the Wisconsin team that made just 3-of-16 triples in Ann Arbor.

While Irvin has excelled against Wisconsin, DJ Wilson has struggled mightily. Wilson totaled 2 points and 7 rebounds  in two games against the Badgers. On the other hand, Moritz Wagner had a 21 point performance in Ann Arbor, proving that he can score against Happ, one of the best defenders in the league, on 8-of-14 (3-6 3pt) shooting.

No one is playing better basketball than Derrick Walton in the Big Ten right now, but he only scored 5 points on 1-of-8 shooting in the last meeting while handing out 8 assists. He’ll have to face Wisconsin’s perimeter defensive specialist in Zak Showalter.

“Showalter is an elite defender,” Beilein said after the last meeting. “I don’t care who he gets put on — he shuts off your water. Derrick, he had some good looks a couple of times. He didn’t get many, and then all of a sudden, he found the right people.”

KenPom projects a narrow 63-62 Wisconsin victory, giving the Wolverines a 47% chance at winning their first Big Ten Tournament since 1998.