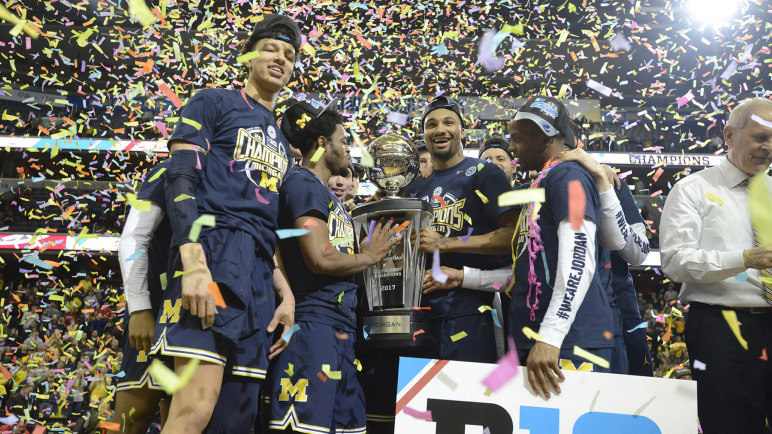 Michigan made it four wins in four days in Washington D.C. with a statement victory over Wisconsin on Sunday afternoon. Here’s what we learned during Michigan’s trip to the nation’s capital.

Michigan made it four wins in four days in Washington D.C. with a statement victory over Wisconsin on Sunday afternoon. The Wolverines knocked off the Badgers with critical late game execution, but the focus quickly shifted to Oklahoma State when the brackets were revealed.

We’ll get to Oklahoma State in time, but this was also a week that taught us a lot about what kind of team Michigan really is. Here’s a look back at the most important takeaways from Washington D.C:

This wasn’t that unexpected

Michigan is the lowest-seeded team to ever win the Big Ten Tournament, and top-four seeds have won all but one since 1998, but this wasn’t quite as unexpected as the seed may have indicated. The Wolverines’ seed was also a product of tiebreakers and an unbalanced schedule which doesn’t provide the most accurate picture.

Michigan was the second-best team in the conference to the efficiency metrics and those tend to be the most important predictor for success on a neutral floor. The Wolverines are now 6-0 on neutral sites and of those six wins five of them have come against NCAA Tournament teams.

Another impressive stat that was emphasized this weekend is that Michigan has won every game against a team that it has faced for the second or third time.

DJ Wilson at the five is here to stay

“We thought we might have to double Happ,” Beilein explained after the game.”DJ Wilson, at halftime, said ‘I want Happ.’ That wasn’t me. What a difference he made. I made the point in the last couple of days with DJ and Mark (Donnal) that Zak (Irvin) and DJ are better post defenders at a smaller size because they use their feet better. Mark and Moe had to use their feet better and be quicker against the big giants — the Haases and Swanigans. DJ did that.”

In the middle of a second half in a critical NCAA Tournament game, Beilein isn’t going to hesitate to roll out Wilson at the five instead of Mark Donnal. It gives Michigan more offense and better mismatches, but he also now trusts the redshirt sophomore to make plays defensively.

Wilson had himself a game after he had struggled in Michigan’s previous meetings against Wisconsin and finished with 17 points on 8-of-11 shooting, 5 rebounds, 3 assists, a block and a steal. Happ was just 2-of-8 from the floor in the second half.

There’s no other way to put it. Walton has put Michigan on his back. He’s been carrying the Wolverines and kept on carrying them on Sunday. He casually poured in a 22 point, 7 assists and 6 rebound game while icing it away at the free throw line.

Walton was named the Big Ten Tournament MVP and for good reason as he averaged 20.5 points, 6.3 assists and 4.8 rebounds per contest.

“We’ve had it with other players, but it came easier to them. He’s such an unselfish young man that he just wanted to have other people score the points. He would just facilitate things and we weren’t going to win if that was the situation. We kept preaching it to him and preaching it to him and right now he’s running this team. The game has slowed down for him really.”

Zak Irvin is back

Irvin is averaging 14.8 points per game over the last five and his shooting splits are impressive at 22-of-31 on twos (71%) and 9 of 22 on threes (41%). He’s attacking the rim with confidence, but he’s also knocking in the jumpshots that he was struggling to make.

He hit some huge shots late against Wisconsin including a curling three-pointer late in the shot clock that helped extend Michigan’s lead after a Wisconsin run.

“He’s really just relaxed and let the game come to him,” Beilein explained. “But he’s worked really hard. He’s in the gym extra, when I want these guys off their feet… him and Duncan listen to me a lot, but they don’t listen to me about that. He’s in the gym making another hundred shots. He was very disappointed with some games where we needed him to make big shots and he didn’t. I think he heard the people that doubted him and I knew at some point he would make some big plays. That lob play to DJ Wilson was a great play for us.”

Irvin won the Purdue game down the stretch, but it wasn’t just one game. This has been an impressive stretch for the senior wing who has also emerged as Michigan’s best defender.

Michigan played 265 defensive possessions in Washington D.C. and allowed 258 points. That’s just .97 points per possession and that’s a hell of an effort for a team that looked so defensively challenged a couple of months ago.

There have been signs of that defensive improvement over the last month, but they were sort of taken with a “yeah, but” and hard to believe. The truth is that Michigan’s defense has been closer to what we saw in D.C. than what we saw in Janaury for a while now, but this was the sort of stage that makes it feel legit.

“This team’s learning curve… With Billy’s defense, I think that was a big thing,” Beilein said.

The game is slowing down on both sides of the floor for Michigan and the defensive effort was obvious against Wisconsin, which managed just .93 points per possession against the Wolverines.