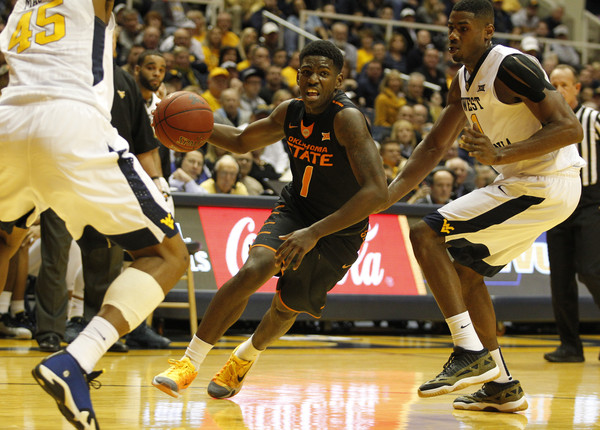 Michigan will face Oklahoma State in the first round of the NCAA Tournament on Friday. Here’s a first look at what the 10th seeded Cowboys bring to the table.

Michigan will face Oklahoma State in the first round of the NCAA Tournament on Friday. Here’s a first look at what the 10th seeded Cowboys bring to the table.

Oklahoma State played the most difficult schedule in the country according to KenPom and that explains some of the dramatic winning and losing streaks on the resume. The Cowboys started Big 12 play with 6 straight losses before rattling off 10 wins in 11 tries. As in any strong major conference, ups and downs are usually due to schedule more than anything else.

The Cowboys have the No. 1 offense in the country according to KenPom’s adjusted offensive efficiency metric at 124.8 points per 100 possessions. They shoot the three well at 40.3% (8th in the country), but only attempt 36% of their shots from deep (compare that to Michigan’s 45.1% 3PA/FGA). This is a perimeter-oriented group with a couple of great shooters, but it is built around an elite dribble-drive threat which the rest of the offensive action plays off of.

There are a some really good teams and offenses in the Big 12, but this is a defense that just hasn’t shown the ability to stop anyone.  The Pokes primarily play man-to-man defense, but press on 10% of defensive possessions and will play also some zone (14.2%) as well. Of all of those looks, the press has been most effective.

Oklahoma State allows teams to shoot 52.5% inside the arc (294th) and 35.5% on threes (192nd) for a 52.8 eFG% (275th) giving up 45.6 free throws per 100 field goal attempts (334th). The only redeeming quality of the Cowboy offense has been its ability to force turnovers on over 20% of their opponents’ possessions. That’s something that Brad Underwood’s teams at Stephen F. Austin did well and has carried over to Oklahoma State.

Oklahoma State point guard Jawun Evans stands 6-foot-1, 185 pounds and is one of the best point guards in the country. He’s ranked 3rd in the country in assist rate and draws 6.6 fouls per 40 minutes. His jumper is a work in progress, but he’s able to get downhill and attacks the basket as 79.5% of his field goal attempts come inside the arc, and he has proven that he can hit an open three (38%) in limited attempts.

Most of his offense comes out of the ball screen and the Pokes end 27.4% of their possessions out of that look while grading out in the 87th percentile. Those numbers are just a hair behind Michigan, which has one of the best ball screen offenses in the country.

Evans is a balanced ball screen guard who can make all of the reads whether he’s driving to the rim, hitting a mid-range jumper, finding the roll man or kicking it to shooters.

The worry out of the pick-and-roll game will be a repeat of what we saw on Saturday against Minnesota with Nate Mason. The Golden Gophers’ guards were consistently getting into the lane and drawing out Michigan’s help which didn’t just lead to some easy looks, but also the worst defensive rebounding game that Michigan has played in a while.

A missed layup off of dribble penetration is still a great play because the weakside rebounding opportunities are there and I’d bet that’s how so many of Oklahoma State’s second chance opportunities come around.

The key will be which team is controlling the game. Michigan is lethally efficient when it can get clean defensive stops — rebounds or forced turnovers — and push the pace on its own. On the flip side, the Wolverines don’t want to get sped up in track meet and make silly mistakes.

Here’s how both teams’ transition numbers compare, per Synergy.

Notice that Michigan and Oklahoma State are just about equal when they do play in transition offense, but the Pokes are far more aggressive (18% of possessions). On the other end of the floor, Michigan is far superior both in limiting transition opportunities and defending them. Those defensive numbers should light up Derrick Walton’s eyes, especially with how effectively the Wolverines attacked in transition during their time at the Big Ten Tournament.

Michigan hasn’t played many teams like Oklahoma State, which should provide some pause, but I think that the success of the Iowa State model is most relevant here. The Cyclones beat Oklahoma State three times this season and match Michigan’s statistical profile almost to a tee: they have a perimeter-oriented pick-and-roll heavy offense led by a senior point guard, they don’t turn the ball over and they are the worst rebounding team in the Big 12.

Iowa State scored 274 points in three games against the Pokes, all wins, and that bodes well for a Wolverine offense that is clicking on every level.