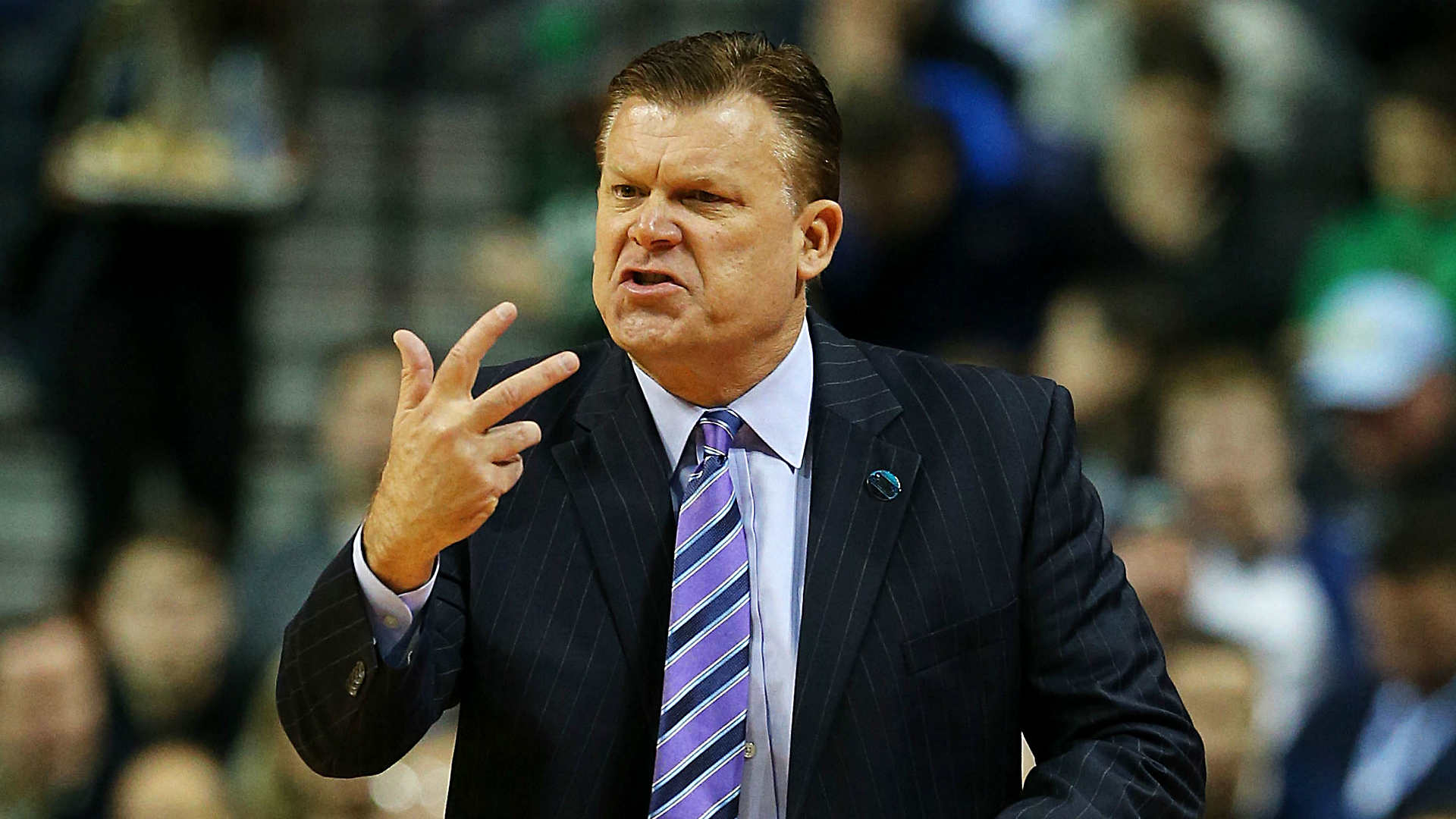 While the Wolverines discovered their tournament fate in a hospitality lounge in the Verizon Center, Oklahoma State held a watch party to celebrate their inclusion. Here’s what the Cowboys had to say about the matchup.

The Michigan basketball team didn’t have to wait long to find out its fate Sunday night. Shortly after finishing off Wisconsin in the championship game of the Big Ten Tournament, the Wolverines were revealed as the No. 7 seed of the Midwest Regional, where they will face No. 10 seed Oklahoma State. The game will take place at 12:15 on Friday in Indianapolis.

While the Wolverines discovered their tournament fate in a hospitality lounge in the Verizon Center, Oklahoma State held a watch party to celebrate their inclusion.

#OKState is a 10-seed in the Midwest. Vs. Michigan in Indianapolis. Potential meeting with Louisville after that. OSU's reaction: pic.twitter.com/wfmtVsdcER

Oklahoma State head coach Brad Underwood spoke with the media Sunday night about the composition of his team and the matchup against Michigan.

Underwood is somewhat familiar with Beilein from conversations on the recruiting trail and a connection between Beilein and his USA Basketball coaching buddy Frank Martin (who Underwood was a long-time assistant under). The first-year coach of the Cowboys admitted he wasn’t very familiar with Beilein’s squad — though that will assuredly change over the next few days. Underwood said he has only watched the Wolverines’ loss to Martin’s South Carolina team earlier this season, while also catching a snippet of Michigan’s win over Purdue in the Big Ten Tournament.

“I’ll be honest, when you get into your own season, I don’t watch a lot of other teams. You get so engulfed into conference play,” Underwood said. “… But I know they’re extremely well-coached. Obviously they’ve been in the media a great deal here in the past few days with everything that’s happened, and coach Beilein’s got that team dealing with adversity and playing at a high level. I know they’re extremely well-coached, and they’re a very good offensive team.”

“I think they pose some problems because they’ve got a 5-man who shoots the heck out of it and we don’t see that a ton in our conference. That’ll be a little different look for us. But we do see a lot of spread ball screen action, which they run, in our league. … So it’s not something we haven’t seen. But obviously, what they’ve done in the last five or six games, especially in the first halves, has been incredible shooting the basketball.”

And despite his general unfamiliarity with Michigan, Underwood was also quick to point out the parallels between the Cowboys and Wolverines.

After a 10-2 start through non-conference play (including a one-point loss to Maryland), Oklahoma State scuffled through the first portion of the conference schedule. It dropped six consecutive games, plummeting its record to 10-8. Through over a little of half of the season, the Cowboys were in a bad position — similar to Michigan. While the Wolverines had a pair of nice wins early in the season over Marquette and SMU, they had floundered the first ten games of conference play to a measly 4-6 record. Their NCAA Tournament hopes were especially dim after back-to-back losses to Michigan State and Ohio State, the latter of which came at home.

But both teams turned things around on the defensive end, allowing each to remain alive this late into March. Oklahoma State ripped off two five-game winning streaks, limiting their opponents to just 71.4 points per game over those ten games (compared to an average of 85.7 points per game during its six-game losing streak). The Wolverines looked to improvements on defense as well, defending the perimeter and interior better than it had been doing.

“We started 0-6 in league play and we had to make a few changes,” Underwood said when commenting on similarities between the two teams. “Until late, you didn’t hear much about Michigan in terms of NCAA picture, and we were in the same boat. I think it’s two teams that are playing with confidence, two teams that are playing extremely hard and have gotten better and I think that speaks volumes to (Beilein) and his staff’s ability to continue to work through struggles, but I think it more importantly speaks volumes to the character of their players and their team, that they never quit, they never flipped the switch off.”

“That’s something we take a lot of pride in here with our team. Our guys, we’ve got high-character young men, they’ve worked extremely hard and we’re proud of that. So we see, I think in terms of going to practice every day, a lot of the same similarities that they have, so it shouldn’t come as a real big surprise.”

Underwood spoke about the specific changes his team made on the defensive end, citing how Oklahoma State had trouble during its six-game losing streak against teams that featured elite point guards (sound familiar?) and multiple ball handlers. So Underwood and his team concentrated on fixing those issues — in addition to a propensity to foul too much — en route to putting their season back on the right track.

While the defensive numbers still aren’t what one would call pretty and the Cowboys gave up 86, 90 and 92 points in a three-game losing skid to finish the regular season, the defense is in a better place than before, and is a better complement for what is clearly an explosive offense.

“Well, we’ve got a very good point guard and it all starts there with Jawun,” Underwood said. “He’s been arguably as good as anybody in the country the last half of the season, and not doing it just with scoring. He had 15 assists in a game. We’ve been a team that has been able to shoot the ball from the perimeter, very similar to Michigan. We’ve been a good 3-point shooting team. And then we’re a team that — I don’t know exactly offhand where we’re at free-throw shooting percentage wise, but we’ve been a very good free-throw shooting team and it’s been something that we’ve gotten there quite a bit with. And then the last thing is we’ve got a team that has been pretty effective on the offensive glass.

“So when you put all those things together, we’ve become a pretty challenging team to guard at times. I didn’t think we played very well in our last game against Iowa State on the offensive end, and we scored 83 points.”

Underwood said that he has been pleased with the way his team has played — even through its current three-game losing streak.

His team is confident as well, with guard Phil Forte pointing out a similarity between his teammate Evans and Kemba Walker, whose 2011 NCAA Tournament performance entered him into basketball lore — which, interestingly enough, is the same comparison that some have made regarding Michigan senior point guard Derrick Walton Jr.

Said Forte to Guerin Emig of Tulsa World:  “You look at certain guys, like Trey Burke and Kemba Walker, that have carried their team through … Having a guy like that as your point guard going into the NCAA Tournament lets you know you’re going to have a fighting chance against whoever you play. Jawun is playing at a high level, and he’s been doing it against some of the other great point guards in the country.”