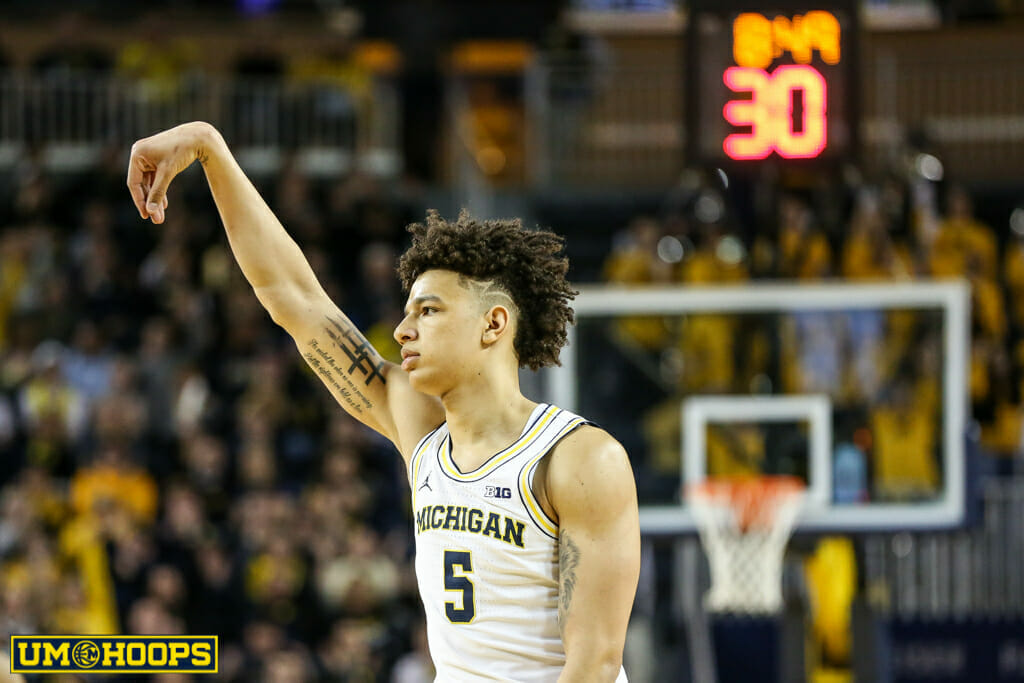 We’ve examined trends in our First Look, broke down Oklahoma State’s rotation and looked at their tempo-free profile. Today, we look at the keys to the game and what will make the difference in the final result.

We’ve examined trends in our First Look, broke down Oklahoma State’s rotation and looked at their tempo-free profile. Today, we look at the keys to the game and what will make the difference in the final result.

I get the sense that everyone is talking about tempo in the wrong light. It’s not that there aren’t dramatic differences between how fast the two teams play, I’m just not sure that conventional wisdom as to how the Wolverines should attack (by slowing the game down to a crawl) the difference is correct.

Both Michigan and Oklahoma State score the ball at an incredible efficient rate and the differences in tempo are jarring. The average Michigan game has 62.4 possessions while the average Oklahoma State game has 69.9 possessions. That’s a difference of 275 spots in KenPom’s tempo rankings and about as far on the opposite side of the spectrum that two teams can be.

Here’s a histogram of both teams’ tempo over the course of the season. Oklahoma State has played just six games 67 possessions or slower, Michigan has played 31.

While both teams play at radically different speeds, the answer isn’t that Michigan wants to play some drag-out, grinding, 58 or 59 possession slug fest.  The Wolverines have won some of those games in the past, but they’ve also played a lot of them just because that’s how so many Big Ten games are played. They’ve also won plenty games at faster tempos.

The more important issue is what part of the game is played at tempo.

Michigan has the discipline to take the easy buckets in transition off of clean rebounds or turnovers while still forcing Oklahoma State to grind out a 28 second defensive possessions. As those possessions, along with any quick Oklahoma State misses, add up then the Wolverines will start to gain an advantage. In a way, Michigan can slow the game down whiles till taking advantage of the easy opportunities that the Pokes might provide.

Oklahoma State is very bad defensively in transition and Michigan would be missing out on too many key opportunities if they slow the game too far down.

Jawun Evans is going to get his buckets. Make no mistake about it, he’s going to have some highlight moments in Friday’s game. The key for Michigan is to not go crazy trying to slowdown Evans and make sure to takeaway his outlets. Michigan is better off with Evans throwing up a floater (about .96 points per shot) than over-helping and leaving Jeffrey Carroll open for a three (about 1.29 points per shot).

The least efficient thing that Evans can do is shoot — 46% on twos, 38% on threes — so if you can force him into tough twos and rebound the misses, you are in a pretty good spot. When he’s passing it out of pick-and-roll action, he’s among the best in the NCAA Tournament.

It’s easier to execute that strategy with a lockdown perimeter defender, which Michigan doesn’t really have. The task of chasing around Evans will likely fall on Derrick Walton’s shoulders with Muhammad-Ali Abdur-Rahkman trying to deny Phil Forte of quality shooting opportunities. That’s a lot to task your starting point guard, especially when he’s so important to the Wolverine offense, but it is the key to a Michigan win.

The most important ‘other guy’ to negate is Jeffrey Carroll. Carroll is a 6-foot-6 wing who at 215 pounds can attack in transition or step out and hit open threes.

This feels like the one area of the game where things could get away from Michigan. The Wolverines will be comfortable going shot for shot against an Oklahoma State defense that hasn’t been very good this year, but can they keep it to one shot for one shot.

The spread pick-and-roll creates problems because Michigan has to either hedge away from the basket — pulling its primary rebounders 20+ feet from the hoop — or switch — leaving a guard down low trying to box out a big. You can see both of those actions causing problems in the video above and that’s what Michigan will have to work to contain with a team effort on the defensive glass.

Michigan spent most of the last week in Washington, D.C. prepping for dominant low post scorers. Prepping its skinny and versatile big men to move their feet and attempt to contain some of the best post-up scorers in the country in Caleb Swanigan, Ethan Happ and Isaac Haas. Now the script changes against Oklahoma State.

The Wolverines are also going to have to defend as many ball screens as they’ve seen all season. Hedge and recover, hedge and recover. They’ll also be facing a point guard who is as capable of exploiting

Michigan’s bigs shouldn’t necessarily have a big problem defending Oklahoma State’s undersized frontline, but the bigger question is whether Michigan can exploit its size advantage. Some of the best performances that Moritz Wagner and DJ Wilson have had this season have been against smaller players who can’t deal with their quickness. That advantage will be available against Solomon, but not against the Pokes’ small lineups.

Wilson and Wagner have the capability to take advantage of some of those match-ups, but we haven’t necessarily seen that consistently. I’d expect Oklahoma State to switch ball screens with their smaller lineups which will present us with another chance to watch Derrick Walton try to break down those one-on-one matchups with the Cowboy wings.

X-factors off the bench

Neither of this teams is particularly deep, but there are a couple of key bench contributors who could make a key impact in this game in their own way. Xavier Simpson could be a critical piece for Michigan as he’s the best perimeter defender on the Michigan roster and might have the quickness to stay in front of Jawun Evans for key spurts.

The wing players off the bench are even more intriguing. Duncan Robinson has proven time and again that he’s capable of changing the game with a few jumpshots in a row and he’s going to get his looks. On the flip side, 6-foot-5 wing Davon Dillard is an Indiana native who played against Zak Irvin in high school and can impact the game with his athleticism.

Dillard is the second-best offensive rebounder on the roster and a great finisher around the hoop. He’s a guy that Michigan has to find both in transition and when shots go up to the rim.