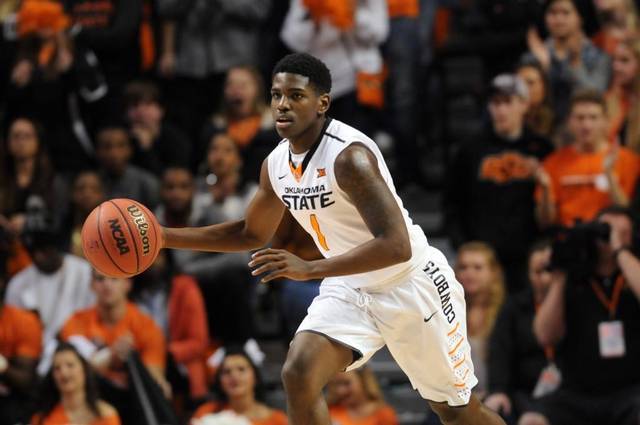 Two teams known for their lethally efficient offenses will take the floor Friday afternoon at Bankers Life Fieldhouse. There are certainly similarities between the pair. Each team is led by a star point guard. Both outfits can shoot the ball extremely well.

Yet the approaches to how Oklahoma State and Michigan (first and fifth in adjusted offensive efficiency, respectively) prey on opposing defenses are fundamentally different

There are certainly similarities between the pair. Each team is led by a star point guard. Both outfits can shoot the ball extremely well.

Yet the approaches to how Oklahoma State and Michigan (first and fifth in adjusted offensive efficiency, respectively) prey on opposing defenses are fundamentally different. The Cowboys play at a breakneck pace, looking to run the floor and score in transition. The Wolverines, meanwhile, are content within their meticulously-designed halfcourt offense. The set-up is simple: a high-scoring chess match where each team will look to impose their will on the other, forcing the opponent to play at their tempo, while exploiting any possible advantages and finding counters to any weaknesses.

It all starts with pace: for Oklahoma State, the key all year has been speed. The Cowboys have an adjusted tempo of 70.0 possessions per game, and they have been successful in transition because of their propensity to generate turnovers, allowing them to break out. Yet Michigan is judicious with the ball, rarely giving it up, and doesn’t hit the offensive glass hard — both factors in determining how fast teams can push the tempo against them.

“We want to play our game. We don’t want to slow down to their game.”

Another key match-up will take place around the perimeter. With sophomore forward Moe Wagner, the Wolverines have a dangerous pick-and-pop game. Both Solomon and Oklahoma State coach Brad Underwood mentioned their team hasn’t seen too many big men that have the floor-stretching capabilities of Wagner. Underwood has had his team focus on closing out on shooters quicker. Yet the specific strategy of countering Wagner on the pick-and-pop remains unknown. Will the Cowboys switch every high ball screen — a strategy that has recently been adopted against Michigan by teams such as Northwestern — or will they look to play straight up?

“They do a tremendous job of reading whatever you do. I think whatever way you choose to guard them, it’s to a certain extent, you pick your poison,” Underwood said on Thursday. “Teams that have switched can give up rebounds. Teams that don’t force you into rotations and you’re talking about four guys or five guys on the perimeter that have great spacing.”

Oklahoma State, meanwhile, also has the ability to blitz teams from deep. The Cowboys shoot 40.3% on threes, good for eighth in the nation, and feature two of the nation’s best sharpshooters in Phil Forte and Jeffrey Carroll.

Defending the three-point line may have been a bigger problem for the Wolverines earlier in the season. But they buckled down in the second half of the Big Ten, limiting threes, and according to junior guard Muhammad-Ali Abdur-Rahkman, continued to work on running shooters off of the line this week in practice.

The most important match-up, though, happens to be the one nearly everyone has discussed this week: the battle between senior point guard Derrick Walton Jr. and Oklahoma State’s Jawun Evans, who will be guarding each other in Friday’s game.

Michigan conducts its offense through Walton. He is the primary decision maker, calling for high ball screens and deciding whether to drive, dish or shoot, and has elevated his game to a height rarely seen over the second half of the season.

“We play a little more uptempo than Michigan, yet he does exactly what his coach wants to just as Jawun does for us,” Underwood said. “Jawun’s terrific in ball screens. Not that Derrick isn’t — they don’t put him in as many ball screens. Derrick’s a little more physical, and I think they do the same things in terms of their leadership. They’re great players because they make their teammates better. They demand more of their teammates. That’s what great players do.”

Added Evans: “It’s nothing really you can shut down. He’s a top college guard too, so you’ve got to just contain and be there when he tries to do something.”

Yet as vital a role Walton plays in John Beilein’s offense, Evans is even more involved in his team’s attack. He uses 33.0% of his team’s possessions, he takes 32.7% of its shots, and his assist rate is an astounding 43.5 (3rd in the country). Beilein, Walton and Simpson all pointed to Evans’ ability to change speeds as a defining characteristic of his game, while Beilein also compared Evans to Minnesota’s Nate Mason, who gave Michigan trouble in the Big Ten Tournament last weekend with dribble penetration.

Differences in playing style aside, Walton and Evans both possess a similar ability to throw a wrench into a team’s defensive gameplan. So while each team may look to affect the other’s tempo and defend the perimeter well, it all boils down to who will have the advantage in the head-to-head battle between Walton and Evans.

“I’m very excited,” Evans said. “Just going up against one of the top seniors in the country, being one of the big games, first game of March Madness, so I’m just ready to take on the challenge.”