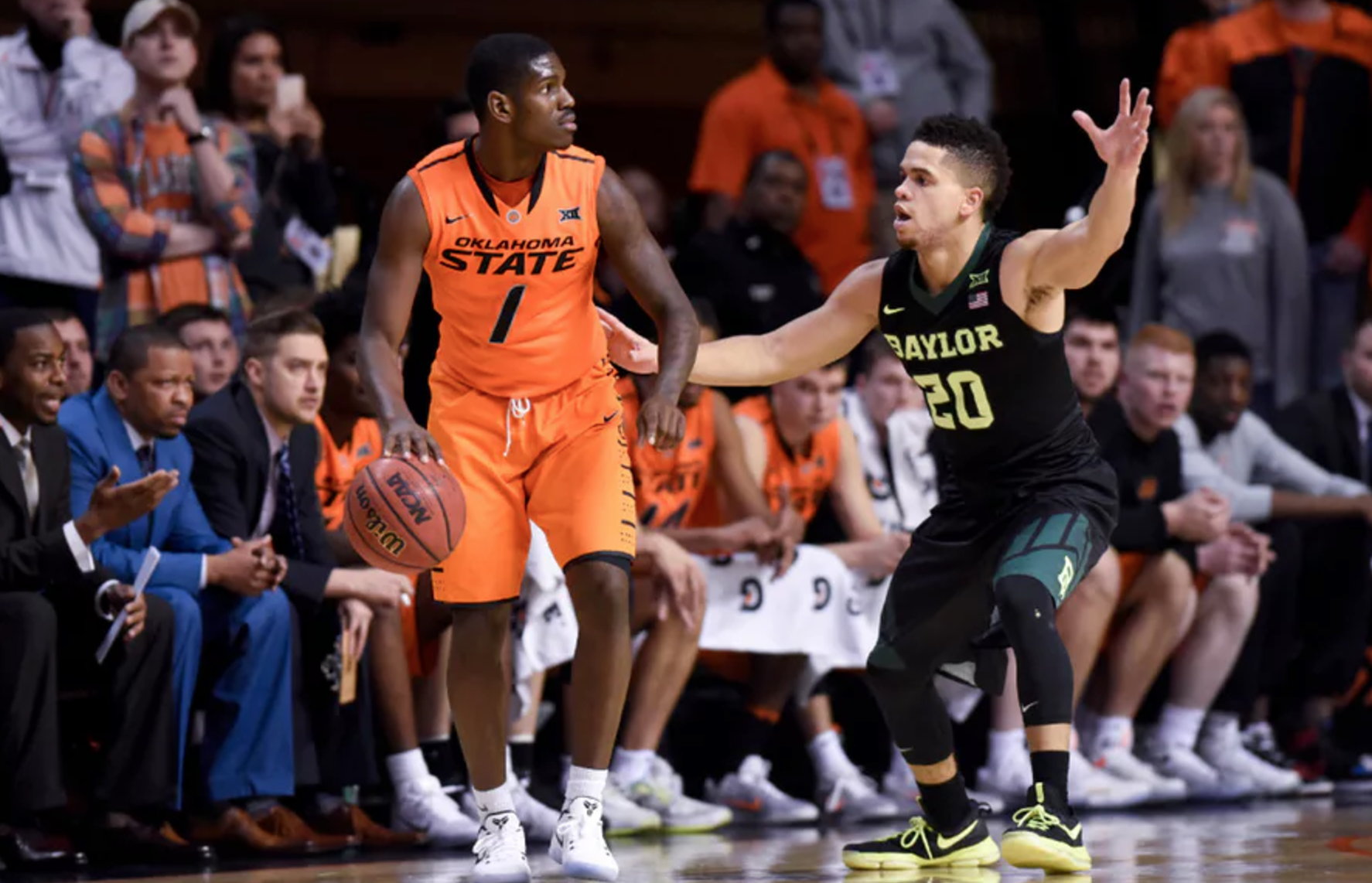 Michigan vs. Oklahoma State pits two of the best offenses in the NCAA Tournament against each other, here’s a look at what to expect from both teams.

Michigan didn’t draw the toughest 10 seed in the NCAA Tournament (that would be Wichita State), but it wasn’t far off in drawing Oklahoma State.

The Pokes played the most difficult schedule in Division 1, per KenPom, and scrapped their way to a .500 record in the best conference in the country. They might lack the top-quality wins — although they did beat Wichita State by 17 and won at West Virginia — but they don’t have many bad losses either. The Cowboys’ worst losses are 82-79 at Texas and 71-70 at Maryland, their other defeats are to North Carolina, Baylor (x2), Kansas (x2), Iowa State (x3), West Virginia, and Kansas State.

We’re testing out a couple of Four Factors graphics in this week’s preview. The size of the bars represents the percentile rank of each team in a given statistic rather than the actual value. A mismatch will be obvious by a big difference in height, with the taller bar the better. For example, Oklahoma State’s offensive rebounding is among the best in the country and Michigan’s defensive rebounding is just average.

The Pokes have the best offense in the country, scoring 1.25 points per possession (adjusted for strength of schedule) and 1.16 points per possession in Big 12 play. To be fair to Michigan, the Wolverines have played against 3 top-15 offenses this year (UCLA, Marquette, SMU) so it isn’t like they haven’t seen a team this capable, but the second-best Big Ten offense is Purdue at just 24th in KenPom’s offensive ratings. This will be a step up in challenge for Michigan’s improved defensive unit.

Oklahoma State’s offense plays fast (70 possessions per game), shoots the three-point shot well (40.3%) and crashes the offensive glass (38% offensive rebounding rate). It’s an odd combination — you don’t usually see perimeter-oriented teams that shoot threes — but it works well with their personnel. Only 36% of Oklahoma State’s shot attempts are threes (180th), and they shoot just 50% (143rd) inside the arc. It’s important to keep the Pokes off the free throw line where they make 78.7% of their freebies (5th).

The numbers say that Michigan should do a good job of limiting the transition opportunities as the Wolverines only allow transition offense on 10.7% of defensive possessions (the fifth-lowest rate in the country) and do a good job of preventing easy baskets. This comes at the expense of an offensive rebounding attack, but it provides the Wolverines with a distinct advantage in a match-up like this.

The much bigger concern for Michigan’s defense is keeping jet quick point guard Jawun Evans out of the lane where he can score at the rim, find a teammate, or create easy offense via the Kobe-assist. John Beilein used (All-Big Ten First Team) point guard Nate Mason as an example for how Evans can attack and that’s a good example, but also probably selling him a bit short as Evans is quicker, more efficient and a better passer than Mason.

The biggest question in this game is whether Michigan can slow down the Pokes in the pick-and-roll game and adequately clean up the misses on the defensive glass. Clean rebounds are like a two-for-one bonus because they are not just a stop, but a transition scoring opportunity awaits on the other end of the floor.

On first glance, the strength of Oklahoma State’s defense appears to be its ability to turn its opponents over. That was the case early on this season, and a staple of Brad Underwood’s defenses in the past, but hasn’t been a focus as the year wore on. Underwood moved away from the aggressive, pressing and trapping defense early on in the season, a trend which is obvious looking at the 4-game rolling averages of the four factors for the Pokes (follow the orange line).

Early in the year, Oklahoma State was routinely turning teams over on close to 30% of their possessions. Down the stretch in Big 12 play, that trend hasn’t jumped above 20%. The shift away from pressing and turning teams over led to improved defensive rebounding and free throw prevention numbers, but teams have continued to make shots consistently against the Pokes.

Oklahoma State would have the worst eFG% defense in the Big Ten — comparing either conference-only or seasonal numbers —  by a comfortable margin. Pairing one of the worst eFG% defenses in the NCAA Tournament with one of the best shooting teams is undoubtedly a scary proposition for Underwood. Open shots are available against the Pokes and the Wolverines have a roster loaded with players who can make open shots. Oklahoma State also allowed Big 12 opponents to make 66% of their shot attempts inside of five feet.

Here’s a peek at their Big 12 defensive shot chart that shows some serious weakness in the corners and at the rim.

Michigan excels in games where it can score around the basket, and those opportunities appear to be available against the Pokes’ undersized frontline.

Oklahoma State also has some warts in areas where Michigan doesn’t usually exploit, but could glean an advantage: on the glass and at the free throw line. The Pokes are a very poor defensive rebounding team and have major issues with sending teams to the free throw line. On the season, Oklahoma State opponents rebound 32.2% of their misses (290th) and attempt 45.6 free throws per 100 field goal attempts (334th).

These numbers were slightly improved in Big 12 play, but any extra points that Michigan can find at the free throw line and on the offensive glass will be a huge benefit for an already explosive Wolverine offense.

The best news for Michigan is that Oklahoma State isn’t very good at defending the things that Michigan is best at: the ball screen, spot ups from the wings, or transition.

I’ve fielded a couple questions about whether the Pokes may try to go with a similar defensive approach to what Michigan saw against South Carolina — because Underwood is close with Frank Martin — but the big difference is that South Carolina utilized that approach with a great defense (3rd in the country). If Oklahoma State could defend like that, they probably would have in the past and there would be something in the numbers that proved it over 30 games into the season.

Our five keys to Friday’s game are broken out into a separate post.

This is as close to a toss-up as it gets according to KenPom. His metrics give Michigan 51% chance at victory and a 1-point edge with a predicted 78-77 final score. Las Vegas and the general betting pubic has been a bit more favorable, with the line opened at Michigan by 1 and growing to Michigan by 2.5.