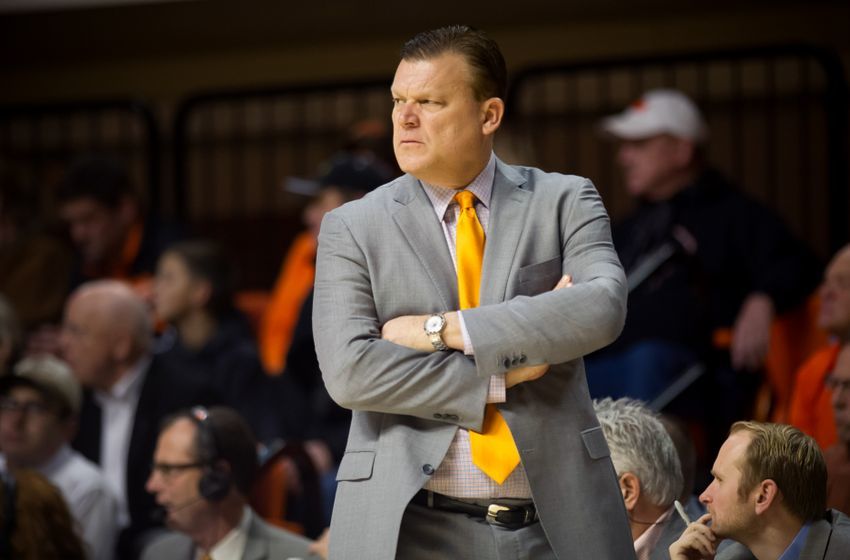 Here’s what the Oklahoma State head coach and his players had to say.

Q. Phil, you played in a lot of NCAA tournaments, but you guys hadn’t won one. How important is it, I know being a senior, you want to win for your own team. How important is it for OSU to get back in the winning business of the NCAA tournament?
PHIL FORTE: Obviously that’s your mentality coming in. Being 0-3 is something in the back of my mind. More importantly, it’s about us moving forward, about our team winning one game and trying to advance.

So we know we have a good game coming up against Michigan, they’re very talented, and we’ll definitely have to be dialed in defensively.

Q. Leyton, the balance that Coach Underwood has tried to strike, I know practices all through the season, kind of a grind to them. Now you get to this point, how much is he encouraging enjoying the moment while you still get ready?
LEYTON HAMMONDS: I mean, he’s just trying to let guys know that this is the best time of the year. This is what we work for in the summer. This is what we worked for throughout the year and kind of enjoy the moment.

Q. Juwan, when you play a team that you don’t know a lot about them, you just watch them on TV. How much unknown is there even after the scouting report in terms of who they might match with who and who you guys want to match up with, those kinds of things?
JAWUN EVANS: It’s something you’ve got to go in the game prepared for. They might have to change up some of their plays and stuff like that. So you’ve got to go in and prepare for it, look for the worst, stuff like that, just got to go out and play basketball.

Q. Phil, I think it’s fair to say most of the national attention has kind of been on Michigan. Do you guys feel forgotten at all or paid any attention to that?
PHIL FORTE: Rightfully so. The circumstances they had to go through, they’ve handled it very well and kind of made it a national story. The way they played in the Big Ten tournament, they’re one of the hottest teams in the country, so coming in, we just have to try to focus in on our game plan and just take it four minutes at a time and really try to focus in on what the coaches are telling us.

Q. Leyton, no matter where you guys win, zero games or six games in this tournament, your career is about finished. How important is your legacy that you and Phil and the veterans have left behind? How important is that to you?
LEYTON HAMMONDS: It means the world to me because, I mean, I’m trying to teach the freshmen that it’s not just about basketball in college. You’ve got to learn how to become a man. I feel like Coach Underwood did a good job predicating that to us and just helping me feel and Phil just try to get in those guys’ heads that regardless of what goes on, on and off the court, you’ve still got to wake up every day and be a man and live throughout your actions.

Q. Phil, back to the other point. Is being an underdog kind of overlooked? Are you comfortable with that role?
PHIL FORTE: We’ve been in that situation before, playing in the Big 12. We play a lot of good teams. So it’s not anything we’re really worried about. It’s more just us going out there and playing the game that we’re capable of playing and making sure we go out and execute the game plan that the coaches draw up.

COACH UNDERWOOD: We’re excited to be here. There is nothing more exciting than March Madness and being with a group of guys that are extremely resilient. They’re very, very high character young men. I couldn’t be prouder to be here with them in terms of this season has been an interesting one in terms of it’s had some ups and downs.

We’ve got a great opponent in Michigan, who obviously is coming off a tremendous high, winning their Big Ten championship and look forward to the opportunity and relish the challenge. The NCAA tournament is very special to me, and I look forward to what should be two very good teams going to battle tomorrow afternoon.

Q. Jawun, this is obviously your first taste of this. What are your emotions as you’ve gotten ready for tomorrow? Has it been hard to kind of keep yourself from getting too excited?
JAWUN EVANS: No, not really. I just take it as just another game, you know, just coming out here, just having fun, just playing my game. I’m glad to have another game with my teammates.

Q. Jawun, similar to what I asked Phil and Leyton, what would a victory do not just for your team but for the overall program at Oklahoma State basketball?
JAWUN EVANS: It would be a great victory for us. Of the times we have been here, we fell short. I feel like a victory will keep us going, keep us playing hard for the next seasons.

Q. Coach Underwood, you mentioned the other night on your teleconference about how well Juwan is playing and all that stuff. Now that you’ve had a chance to look at what Derrick Walton is doing, have you seen any similarities between the two or are they different players?
COACH UNDERWOOD: I think they do it in a little bit of a different manner, but it’s hard to argue with his numbers. Of late, I mean, he’s 20 points per game in the Big Ten tournament. He’s doing it in just about every fashion, transition. He’s doing it in the half core. He’s hit jump shots. He’s finishing at the rim. Juwan does all these things.

I’ve said this, and I believe this, Jawun makes his teammates better. That’s the definition of a great player. Their guy does the same thing. And, I mean, he makes his teammates better. He is the driving force for their team, and he’s got great leadership skills. That’s been very evident, watching him on film, getting in guys’ faces when he needs to and challenge them and pat them on the butt when they need it. Sign of a very good player.

Q. Coach Underwood, the teams have taken different approach to guarding the pick-and-pop game. Do you think that they remind you of anyone and what is the risk/reward of switching every screen with them. What’s the risk/reward of and the conditions of trying to do something like that?
COACH UNDERWOOD: They do a tremendous job of reading whatever you do. I think whatever way you choose to guard them, it’s to a certain extent, you pick your poison. Teams that have switched can give up rebounds. Teams that don’t force you into rotations and you’re talking about four guys or five guys on the perimeter that have great spacing.

That’s what makes what they do so difficult is John does an incredible job of spacing the floor. They force you an extra step or two because they can shoot it, and then you’ve got a guy like Irvin who is a very good driver. So you pick your poison with whichever you choose, and you’ve got to make it difficult and not allow them to be as comfortable as they want to be, and then you’ve got to contest shots.

Q. Brad, I asked your players something similar. OSU’s only got one NCAA tournament victory since Eddie Sutton’s last year. How important is it not just to get here but to start winning again in the NCAA tournament?
COACH UNDERWOOD: I think we have a long history at Oklahoma State of success in the NCAA tournament. And obviously, Coach Sutton’s Final four runs, you go back a little further into the Coach Iba’s time and winning national championships. This should not be a foreign place for Oklahoma State basketball. The history of our program proves that out.

I think, at different times, programs go through little lapses or whatever it may be, but we’re excited to be here. I think you go into every game with the opportunity to win it. I think no matter whether you have a 16 seed or number 16 by your name or have a ten like we do, you have a great opportunity in today’s basketball world, and I’ll look back to my team last year.

We were a 14 and beat a three. It’s a great opportunity. And Oklahoma State belongs in the tournament and we should be happy for us, not something that just happens every so often.

Q. Phil, I remember seeing you underneath the arena after the game in Omaha a couple years ago, and obviously, a frustrating time for you. You look back on that time and think about what was going through your mind at that time about whether that might have been it, if you weren’t — because you weren’t sure about what was going to happen after that. Do you remember that time?
PHIL FORTE: Yeah. You know, any time you lose in the NCAA tournament, it’s your last game of the season so you always remember that moment very well. I think the hardest part is it’s the last time we’ll ever play with that specific group of guys, that specific team. That’s the end.

So this has been a great ride. I don’t know if I’ve ever enjoyed playing with a group of guys as much as I have with this group this year. I think it’s just about playing one more game with this specific group and these guys, these teammates. That’s what’s motivating us to win this game.

Q. Jawun, along the same lines of what I asked Coach before, how much do you know about Derrick Walton? Do you know him at all? From what you’ve been able to watch on tape, are you similar? How do you think your guys’ games compare?
JAWUN EVANS: Like Coach said, he gets his teammates involved. He goes to the high guy. If he needs to score, he scores when he’s needed. So we have similar games also. So, I mean, I don’t know him like personally.