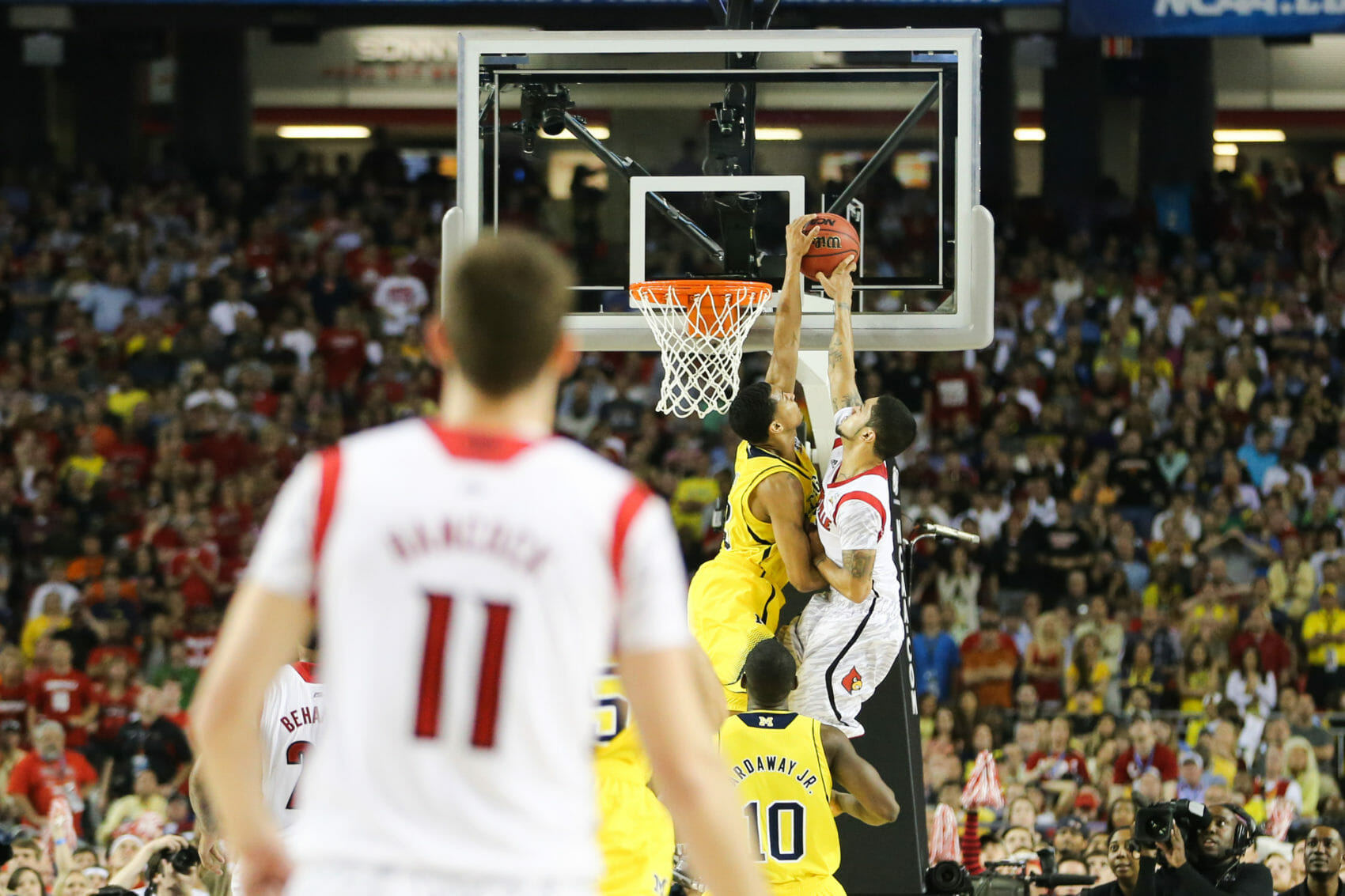 Michigan finally gets its National Championship rematch on Sunday afternoon in the NCAA Tournament second round.

They’ll be facing a Louisville team that was ranked as high as 4th nationally this season and finished tied for 2nd in the ACC at 12-6. The Cardinals have plenty of quality wins (Wichita State, Purdue, Kentucky, Duke), but also entered the NCAA Tournament having lost three of their last 5 including a shootout loss at Wake Forest.

The Cardinals have the nation’s 7th best defense according the KenPom’s adjusted efficiency numbers and outscored ACC opponents 1.13 points per possession to 1 point per possession in league games.

On paper, Louisville’s statistical resume appears to match the stereotype of a Rick Pitino coached team. The Cardinals check all of boxes with a top-ten defense and a very good, but not great offense. They are great on the offensive glass to compensate for having a fairly average shooting team overall. The defense features great shot blocking, interior defense and a mix of pressing, trapping and match-up zone.

Defensively, Louisville fouls a lot. The Cardinals allowed more free throws than anyone else in the ACC and ranked 258th nationally in FTA/FGA. That aggression generally pays off as the Cardinals are ranked 22nd in 2-point defense, 28th in 3-point defense and 17th in eFG% defense with the 6th best block rate in the country. They force turnovers on 19.8% of their opponents’ possessions (90th) and are also solid if unspectacular on the defensive glass, grabbing 71.5% of their opponents’ misses.

Louisville’s ball screen defense grades out in the 54th percentile. The Cardinals have shown problems covering the roll man, grading out in the 89th percentile defending ball handler’s offense and 14th percentile defending the roll man’s offense. The defensive statistic that pops off the page when reviewing Louisville is how many off the dribble jumpers the Cardinals force. 20.2% of Louisville’s defensive possessions end with an off the dribble jump shot (31st) and teams have an eFG% of just 32.5% on those attempts (10th best in Division I).

Offensively, Louisville values the basketball and crashes the glass. The Cardinals turn it over on just 15.9% of their offensive possessions (27th) and rebound 36.6% of their missed shots (13th). That offensive rebounding ability has allowed Louisville to have the No. 23 offense in the country according to KenPom despite mediocre shooting numbers. They shoot just 50.3% on twos (129th) and 35.8% on threes (130th) for a 51.4 eFG% (132).

Louisville is a heavy ball screen team, with 25.6% of its possessions ending out of pick and roll action, and grades out in the 75th percentile in efficiency. Despite the big frontcourt, only 10.6% of the Cardinals’ possessions end out of post ups. That’s an option that’s available, but doesn’t appear to be near the top of the list (10% of possessions). The Cardinals play 16% of their offensive possessions in transition, but grade out in just the 20th percentile in transition efficiency — a sign that they might be overaggressive in forcing the issue.

6-foot-3 sophomore Donovan Mitchell and 6-foot-2 junior Quentin Snider handle the majority of backcourt playmaking duties. They both play heavy minutes and lead the team in three-point makes and assists. Both attempt roughly half of their shots from three-point range and can hit the perimeter jumper at a consistent clip. Snider plays the point and leads the team in assists, he’s also shooting 40% on twos and 39% on threes. Mitchell isn’t far off, shooting 46% on twos and 39% on threes.

They aren’t as effective inside the arc but, as we saw against Oklahoma State, the ability to get shots up on the rim can be enough with a great offensive rebounding team. Mitchell grades out in the 81st percentile using ball screens (including passes) and Snider grades out in the 67th. The duo should be a natural match-up for Michigan’s guards on both ends of the floor.

6-foot-7, 200 pound Deng Adel touts a 6’9.5″ wingspan an starts at the three for the Cardinals. Adel shoots 34% from three-point range, where he attempts 38% of his field goal attempts. The Australian wing gets most of his offense in spot up situations (32% of possessions) and in transition (22% of possessions), but he’ll also run the occasional ball screen but grades out in just the 37th percentile.

Inside is where the scouting report gets dicey for Michigan. The Cardinals have four players at 6-foot-9 or taller that split the minutes at the four and five — Ray Spalding, Jaylen Johnson, Mangok Mathiang and Anas Mahmoud — and they all appear to be matchup concerns for the Wolverines.

As you can see from their shot charts, they aren’t the most diverse offensive players. Almost all of their production comes around the rim and they aren’t going to stretch you out with their shooting ability. Mathiang and Johnson are  the best post up scorer of the bunch, but the Louisville offense doesn’t generally run through the post as often as Michigan has seen against teams like Purdue or Wisconsin.

While the Cardinals have great depth in the frontcourt, they don’t have as much in the backcourt. 6-foot-6 freshman VJ King is the only wing or guard who plays consistent minutes off the bench. King can hit the open three (42%) and has pro potential with his 6-foot-6, 190 pound frame, but he’s played a fairly limited role in the Cardinal offense.

KenPom likes Louisville by a final score of 70-68, but gives Michigan a 42% chance at the upset. Las Vegas agrees as the current point spread is Louisville by 2.5 points.