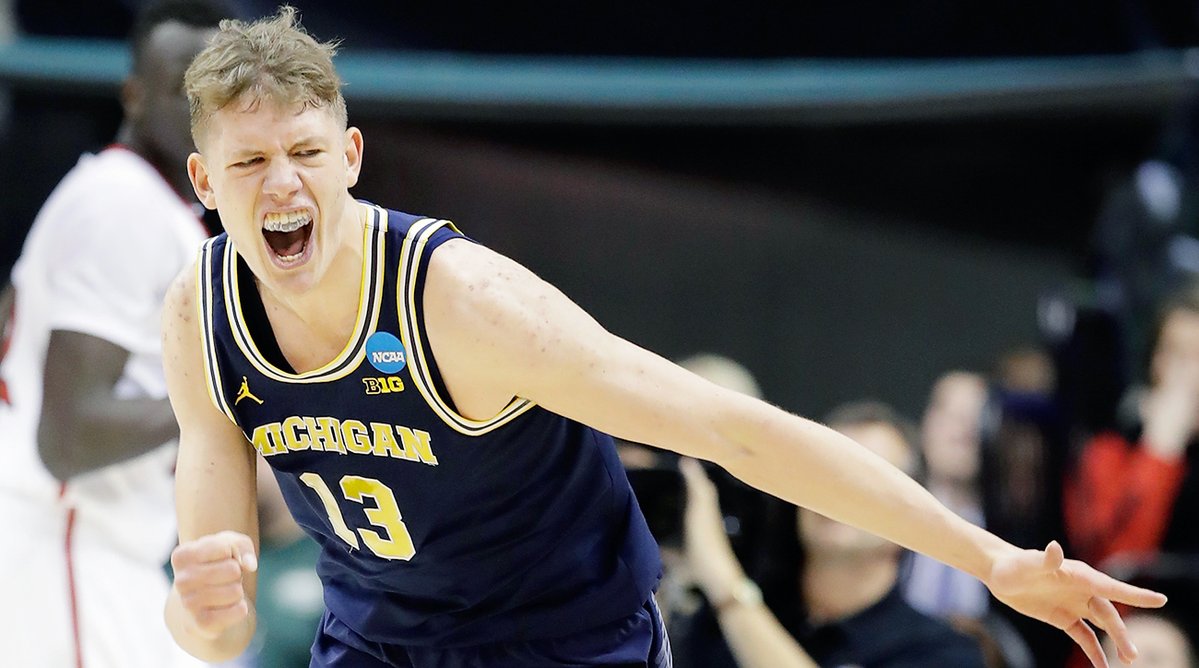 “I like our chances with Moe attacking the basket versus any big in the country right now,” Washington said. “It was just great to see him have success tonight with his offensive package, and that really kickstarted our team.”

INDIANAPOLIS — It was a textbook defensive play. Louisville forward Deng Adel came barrelling down the floor. Moritz Wagner, shuffling sideways, saw an opening for a steal and went for it. He reached his left arm in, poking the ball loose. Ahead, an open court — and a chance to end a 6-0 Louisville run — beckoned.

Then, the whistle blew.

Wagner animatedly ran off the court. It looked like he wouldn’t stop until he reached the bowels of the stadium. Disbelief suspended the Michigan contingent at Bankers Life Fieldhouse — and the Wolverine bench, as well.

Wagner, with his reputation for emotional outbursts, could have unraveled at that point. His team could have, as well: it had scratched and clawed its way back after an ugly start, tying the game at 28, only to see the Cardinals erase all that work and then some with an 8-0 spurt in the final 1:11 of the half.

Michigan headed into halftime trailing, its season in the balance. Its spirit, though, remained unbowed and unbroken, and its star sophomore forward — despite the questionable call — remained unfazed, ready for the task that lay ahead of him.

“(The message) really was just to stay the course and stay poised,” said assistant coach Saddi Washington. “They hit two big threes late and I think they got a steal that kinda changed the momentum, but guys were really, really positive coming in here. …”

“I think he responded pretty well. Moe is going to be Moe. That’s why people love Moe — he has personality, he has charisma, and sometimes it works out for him, sometimes it doesn’t. Tonight, he was really locked in.”

Louisville had slowed down Michigan’s dangerous offensive attack by switching on every ball screen. The Cardinals — buoyed by a deep and lengthy frontcourt — had clamped down upon senior point guard Derrick Walton Jr., who shot just 1-for-8 for five points through the first 20 minutes. With their star point guard ineffective, the Wolverines would need to find their offense from elsewhere — and that came in the form of their frontcourt.

DJ Wilson had himself quite the game, pouring in 17 points on 6-of-13 shooting and calmly draining four consecutive free throws in the final minute of the game.

But it was Wagner who stole the show, scoring 17 second-half points in every way possible en route to a career-high of 26.

It simply did not matter which of Louisville’s big men was guarding him. Adel, Jaylen Johnson or Anas Mahmoud: Wagner had his way with each. He backed them down. He spun past them. He hit a 3 over the outstretched hand of Mahmoud. God forbid a guard got switched onto him, for they stood even less of a chance at stopping him.

And with just over 13 minutes left and his team down seven, he found some form of redemption in a nearly identical play to the one just before half. Wagner stole the ball, carried it down the court in transition and hit Zak Irvin for a fastbreak layup.

“That stuff happens,” said a nonchalant Wagner of his offensive performance. “We’ve been working a lot on switching defenses. DJ and I have the confidence to just attack and do our thing. They stay with the shooters, so we had a lot of room and were able to finish.”

Michigan has not had a big man like this in a long time. The closest comparison during the Beilein era may be Deshawn Sims, from those early years. Wagner practically oozes potential — in games like Sunday’s, he looks like a future NBA first-round pick. He is the closest — and he may turn out to be better — that John Beilein has come to finding a new Kevin Pittsnogle.

Of course, it wasn’t always this easy. As a too-skinny freshman last year, Wagner could barely find time on the floor, only catching on late.

After the season — instead of heading back to Berlin where his family awaited — Wagner spent most of the summer in Ann Arbor, voluntarily enrolling himself in a grueling summer camp: Camp Sanderson. He worked day after day with strength and conditioning coach Jon Sanderson, gaining muscle and strength so that he would be able to better harness and display the talent — talent that everyone at Michigan was aware of but understood needed to be coaxed out.

“I saw a young kid with a lot of talent, a lot of length, a lot of winning attributes that didn’t have a body to compete and to be physical and to rebound and really play his game he wants to play,” Sanderson said. “So I think today is a product of all of his work, and not just him but this team and our coaching staff, but I do think his hard work in the weight room has given him some more physical tools to express his game and how talented he is. He’s gained 30 pounds since he’s been here, and that’s a big deal.

“He’s an unbelievably skilled guy and we have a great system that highlights his skill.”

Perhaps the scariest thing for future opponents — both collegiate and otherwise — is that Wagner has yet to see his physical growth pay off on the defensive end as much as it has on offense. He was quick to point out after the game that he tallied just three rebounds, while the Cardinals dominated the offensive glass.

Defensive and rebounding shortcomings aside, Wagner did admit he was proud to see all that work pay off on the offensive end, allowing him to back defenders down and finish through contact — especially against a frontcourt as athletic as Louisville’s. It has been quite the odyssey, for both Wagner and his team — and his performance in Sunday’s game only extended Michigan’s journey.

“I like our chances with Moe attacking the basket versus any big in the country right now,” Washington said. “It was just great to see him have success tonight with his offensive package, and that really kickstarted our team.”