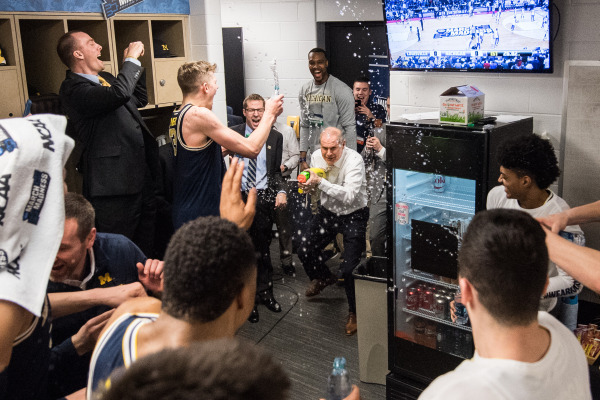 Michigan was beaten badly on the offensive glass, but knocked off the Louisville Cardinals thanks to its ability to attack the basket.

Michigan spent three quarters of its NCAA Tournament win over Louisville just trying to stay alive. The Wolverines were trailing throughout and trying to just do enough to keep contact.

They clawed their way to a late tie in the first half before allowing an 8-0 run in the final minute of play. Then the lead hovered around 9 points early in the second before Zak Irvin hit three straight shots to send Michigan to the under 12 media timeout down by just 3 points.

That was just enough late life to give the Wolverines one more chance with their season on the line. Michigan finally tied the game at 51 with 9:16 to play before exchanging baskets with the Cardinals for a couple of possessions.

It was a three-pointer by Moritz Wagner — who tallied a career-high 26 points on 14 shot attempts — that gave Michigan the lead it would never relinquish. The Wolverines held on down the stretch with a clutch driving layup by Derrick Walton and four late game free throws by DJ Wilson to punch their ticket to their third Sweet Sixteen appearance in the last 5 years.

Michigan scored 1.18 points per possession for the game and the story was its ability to get down hill and get to the rim. Louisville tried and succeeded at taking away the three — Michigan attempted just 30% of its shots from three-point range and made 6-of-17 — but it exposed itself by taking away the three. The best way to attack pressure is with aggression and Michigan looked to its front court players to get down hill and get into the paint against mismatches.

The Wolverines shot 55% on two-point attempts for the game and were 14-of-21 inside the arc in the second half. Louisville managed to negate Derrick Walton, but the Michigan bigs proved that they were capable of getting isolation bucks. The Wolverines scored 40 points in the paint against the biggest and longest frontcourt that they’ve faced all season and it was enough to propel them to victory.

It’s something that we take for granted after watching Michigan all season, but turning the ball over just 6 times in 62 possessions (9% turnover rate) makes up for a lot of the defensive rebounding issues. The Wolverines gained 5 possessions in the turnover column and gave up 6 more offensive rebounds than they grabbed. As John Beilein said in his post game, there’s more than one way to win a game.

Defensively, Michigan really struggled against Louisville’s size in the front court. The Cardinals rebounded 42% of their misses and scored 12 second chance points. Louisville’s four post players were 12-of-17 from the floor, their teammates were just 16-of-37. Michigan mostly hung in there and tried to defend the bigs one-on-one and on the possessions. That led to a lot of easy baskets, but whenever those easy opportunities were denied the Cardinals guards couldn’t create offensive much with much efficiency.

This group of players that even John Beilein seemed to not be able to figure out in January is playing with as much confidence as any Michigan team since 2014. They’ve won 7 in a row and 12 of the last 14 and are playing like a team that is more serious about making a trip to Phoenix than one that’s just happy to be around. The Wolverines will face either Oregon or Rhode Island in the Sweet Sixteen in Kansas City on Thursday night.