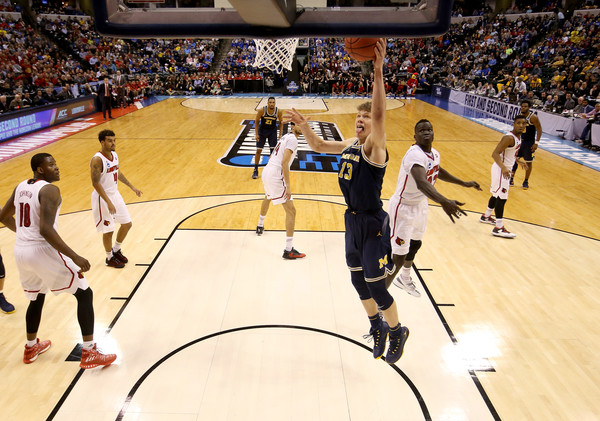 Michigan is in the Sweet Sixteen for the first time since 2014 (and third time in the last 5 years) and will face the Oregon Ducks on Thursday (7:09 p.m. eastern, CBS) in Kansas City. Here’s what the National media thinks of the Wolverines’ chances in the regional round.

Michigan is in the Sweet Sixteen for the first time since 2014 (and third time in the last 5 years) and will face the Oregon Ducks on Thursday (7:09 p.m. eastern, CBS) in Kansas City. Here’s what the National media thinks of the Wolverines’ chances in the regional round.

John Gasaway assesses the Sweet Sixteen coaches, here’s what he says about Beilein:

Defining quality: Wizardry on offense. Beilein has developed a healthy reputation for putting perimeter-oriented offenses on the floor, and certainly his current offense shoots a lot of 3s. Still, the most striking aspect of the Wolverines’ performance so far this season has been the frequency with which they make their 2s. With the 6-foot-11 Moe Wagner and the 6-foot-10 D.J. Wilson each able to drain 3s but also shooting a combined 65 percent from inside the arc this season, Beilein does not lack for options on offense, and opposing defenses do not lack for headaches.

Weakness: Interior defense. For a second consecutive season, Michigan is having difficulty defending the rim. This issue isn’t going anywhere, though it is being submerged a bit like a rock under a wave. In the NCAA tournament, Oklahoma State and Louisville combined to convert 57 percent of their 2s against this defense, but the Wolverines have been able to score their way out of that weakness. (See above.)

No one did more to help their draft stock over the weekend than Wagner. His career-best performance against Louisville — 26 points on 11-for-14 shooting — showed why he was been quickly moving up our Top 100 over the past month. Wagner is a fluid athlete at 6-foot-11 who can score off the bounce and on the block. He also has 3-point range.

When he’s engaged and not in foul trouble, he can take over a game. The fact that he did it against a bunch of NBA-caliber athletes on Louisville impressed scouts. He sat at No. 40 on our Top 100 before the the tournament and moves up to No. 21 in our latest rankings. That’s a huge leap for any player, but if you watched his draft stock all month, it isn’t just based on one game. It’s just scouts getting more and more comfortable with the idea that he has all the skills he needs to be a good NBA player someday.

Here’s what Ford said on Wilson:

Wilson showed off all the strengths of his game against both Oklahoma State and Louisville. He’s a terrific and versatile athlete who can stretch the floor, finish at the rim and block shots. He can even handle the ball and bring it up the floor.

However, his lack of toughness continues to bother some scouts who want to see him initiate and handle contact better. He grabbed only two boards against Louisville and at times seemed bothered by the physicality. Still, athletic 6-foot-10 guys who can shoot 3s and protect the rim don’t come along every day and Wilson has made a strong case to be a first-round pick after hovering in the 30s in our Top 100 all season.

Pete Thamel profiles Greg Harden and his importance to the growth of Derrick Walton.

Matt Norlander calls Michigan’s story the best of March and says they have Final Four potential.

But, as I wrote on Friday , Michigan is more than a great story. It’s a great team. A threat for the Sweet 16 and beyond. A team that once only scored 46 points on South Carolina now rates as nation’s fourth-best offense. A group that looked lethargic and discombobulated six weeks ago has now become a Final Four threat.

Here are Five Thirty Eight’s updated odds for Michigan to advance, which give Michigan a 17% chance of making the Final Four.

ESPN on why Michigan will or won’t keep playing:

Why they will advance: Michigan boasts the best offense in the Midwest Region and perhaps the greatest offensive potential in the Sweet 16. The Wolverines demonstrated their versatility this week in Indianapolis when they scored 92 points in a win over Oklahoma State and then found a way to beat an elite Louisville squad despite making just six 3-pointers.

Why they will go home: As impressive as Michigan has been on offense, it’s fair to wonder if a team that surrendered 91 points to Oklahoma State and allowed a mark of 1.11 points per possession against Louisville (56 percent inside the arc) will fall. If Michigan’s offense stalls for a stretch the way it did against the Cardinals, a more balanced opponent could make the Wolverines pay. — Myron Medcalf

Medcalf also re-seeds Michigan as the No. 5 team in the Sweet Sixteen:

A week after Michigan’s plane flew off the runway prior to a surprising Big Ten tournament championship run, the Wolverines will enter the week as a legit threat to reach the Final Four in a Midwest region that seems perfect for a team like coach John Beilein’s. The Wolverines registered 92 points against an Oklahoma State squad that ranked first in adjusted offensive efficiency entering the NCAA tournament. Then, they collected 1.18 points per possession against a Louisville defense ranked among the top-10 in adjusted defensive efficiency. Any thoughts that Michigan can excel only if it’s hot from the perimeter were put to rest when it hit just six 3-pointers but finished with 40 points in the paint against a Louisville frontcourt with four players standing 6-foot-9 or taller.

The CBS re-seed of Sweet Sixteen teams is less favorable, slotting Michigan at No. 13.

Feel foolish putting Michigan this low, but I have to take the whole season into account. There were times when this team looked really bad. Now it looks like one of the five best teams in the country. This placement is a balance of all that. Wolverines are the team nobody wants to face right now. Oregon, are you ready?

Sports on Earth’s Matt Brown says Michigan has the 8th best chance to win it all:

Nobody would have believed it a few weeks ago, but Michigan has won 10 of its past 12 games, with five of those wins coming against Wisconsin (twice), Purdue (twice) and Louisville. The Wolverines are ridiculously hot offensively, a trend that was initially led by Derrick Walton and Zak Irvin on the perimeter but transferred to sophomore forwards Moe Wagner and D.J. Wilson against Louisville. While Michigan is reliant on outside shooting and is capable of hitting 3-pointers at a high rate, it has displayed versatility, too, especially because of the emergence of Wagner. Will this remarkable streak extend all the way to a national championship? Probably not. But the team that started 4-6 in Big Ten play is ancient history, and the new Michigan looks like it can play with anybody.

Yahoo!’s Jeff Eisenberg notes Oregon guard Tyler Dorsey as a player who shined in the spotlight:

In some games, he has been his team’s best player. In other games, he has been nearly invisible. Thankfully for Oregon, Tyler Dorsey has gotten hot at the best possible time. The streak-shooting sophomore has scored at least 21 points in all five of the Ducks’ Pac-12 tournament or NCAA tournament games. He had 27 points on 9-for-10 shooting Sunday against Rhode Island including the biggest shot of the game. With the score tied and just over 40 seconds left, Dorsey pulled up from a few feet beyond the top of the key and buried the game-winning 3-pointer in his team’s thrilling come-from-behind 75-72 victory over the Rams.

Michigan has moved from 100/1 to 18/1 in updated odds to win the National Championship.