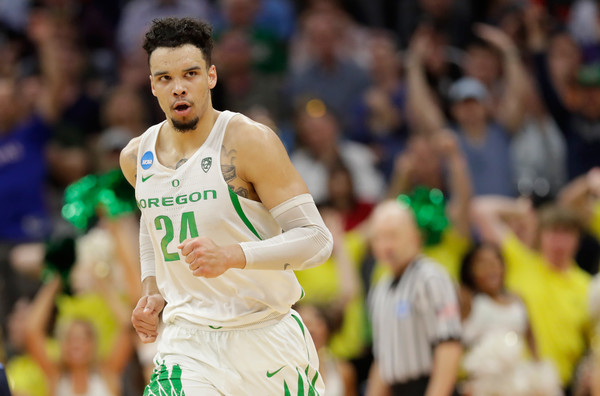 Michigan will face No. 3 seed Oregon in the Sweet 16 on Thursday (7:09 p.m., CBS). Here’s an early breakdown of what the Ducks bring to the table.

Michigan will face No. 3 seed Oregon in the Sweet 16 on Thursday (7:09 p.m., CBS). Here’s an early breakdown of what the Ducks bring to the table.

Oregon relies on what is essentially a four-guard starting lineup and its dependence on perimeter players has only increased since 6-foot-10, 200 pound senior Chris Boucher tore his ACL in the Pac-12 Tournament.

Boucher was an elite shot blocker — and projected second round pick — who enabled the Ducks to play a two-big look or have a more versatile option at the five. Boucher came off the bench, but losing a potential pro this late in the season is never easy. The injury has forced Oregon head coach Dana Altman to go all in with his small ball look.

6-foot-7, 225 pound junior Dillon Brooks has played over 30 minutes per game at the four spot since the injury and he’s an incredible versatile and dangerous matchup for most four men.

The Ducks still have Jordan Bell and reserve big man Kavell Bigby-Williams to man the five (and play spot minutes at the four) but Brooks along with Payton Pritchard, Casey Benson, Tyler Dorsey and Dylan Ennis will account for almost all of the minutes at the 1 through 4.

In the 204 possessions that Oregon has played without Boucher, they’ve allowed 232 points (1.14 points per possession compared to their Pac 12-leading average of.97 points per trip). That’s an obvious drop off, but it is also a very small sample size including games against some very talented teams.

The loss of Boucher will negate some of Oregon’s shot-blocking, but it provides a couple of problems. First, the four-guard look is probably ideal to switch ball screens and could give the Wolverines’ some issues due to Oregon’s versatile lineup.

Second, it leaves Michigan in a tricky spot trying to contain Brooks. He seems like a natural match-up for Zak Irvin rather than DJ Wilson, but if the Wolverines want to play Wilson with Moritz Wagner, then Wilson is presumably going to have to cover Brooks.

What kind of problems does Brooks present? He’s a 41% three-point shooter, but he’s also Oregon’s best playmaker. He can distribute the ball and get down hill and finish over defenders. That ability to put the ball on the deck and overpower people could make him a tough cover for Wilson, who has struggled at times against powerful and quick, but undersized offensive players.

Michigan fans know full well how dominant Derrick Walton has been over the last couple of weeks, but Oregon wing guard Tyler Dorsey has been an even more efficient and productive scorer.

Dorsey is averaging over 23 points per game through Oregon’s last 5 after reaching 20 points just twice this season against a major conference opponent. Here’s a look at how their numbers over the last five games compare:

Walton and Dorsey aren’t likely to match-up — I’d expect Zak Irvin or Muhammad-Ali Abdur-Rahkman to draw the assignment — but the 6-foot-4 wing has been putting the ball in the basket at an incredible rate. He’s more of a score and then score again type of player who isn’t going to make a big impact with his passing ability, but keeping him off the scoreboard is a problem.

Over the first weekend of the NCAA Tournament, Oregon flipped that script. The Ducks grabbed 50% of their missed shots vs. Iona and 44% against Rhode Island and averaged 18 second chance points per game.

Iona (289th) and Rhode Island (198th) weren’t good defensive rebounding teams, but that newfound aggression on the offensive glass should be a concern for a Michigan team that has done a poor job on the defensive glass in its last four games.

Oregon has one of the best transition offenses remaining in the Sweet 16. The Ducks don’t force the tempo as often as Kentucky and UCLA, but they are more efficient. They aren’t quite as efficient as some of the more selective offenses (Butler, Michigan and West Virginia), but they push the tempo more often.

Michigan’s defense generally does a great job of limiting transition opportunities, but the Ducks thrive in an unsettled back-and-forth game.

Oregon will mix up its defense quite a bit and is very aggressive and disruptive. The Ducks led the Pac-12 in block rate and steal rate and forced turnovers on 20% of their league opponents’ possessions.

The Ducks force more turnovers in their zone look, which sounds like its a bit of an amoeba defense and it helped the Ducks win against Arizona this year.

“Our zone worked very well, they didn’t really know what to do with it,” Brooks said after that win. “Our zone is different, kind of a match-up zone and we get after it in there. We forced turnovers and it worked out great for us.”

An Oregon blog summarizes it as such:

The Ducks will start in a zone press, then slide into a match-up zone, and when the offense gets to a spot where all 5 guys are matched up with an offensive player they should be guarding, they switch to a man to man. Then if the offensive post player goes to set a high pick or beyond the arc, they slide back to the match-up

The Ducks will also utilize a zone press on 14.7% of their defensive possessions. At this point, the soft zone press is basically a staple in the game due to the shorter shot clock.  Michigan has seen that action quite a bit due to their fairly deliberate offense and the switching defenses appear to work as Oregon ranks 323rd in average defensive possession length.

The catch with multiple defensive looks is that they are a puzzle. They might cause some confusion for three or four possessions, but they are solvable in the end. Michigan has seen an array of different defenses this year, but how quickly they adjust to the changing looks will be critical.

This is a match-up of the two most three-point happy teams left in the Sweet 16. The Ducks don’t attempt as many threes as Michigan, but they attempt more than anyone else still standing. 40% of Oregon’s field goal attempts are threes and they connect at a 38% clip (42% in Pac 12 play)

Michigan’s defense has hung its hat on its ability to prevent three-point attempts in recent weeks, but this will be one of the most perimeter-oriented teams that the Wolverines have faced in quite a while.

These teams played two years ago in Brooklyn, NY in a game that Michigan won, 70-63, featured several of the same players. Derrick Walton, Zak Irvin and Mark Donnal all played heavy minutes on Michigan’s side, along with Dillon Brooks, Casey Benton and Jordan Bell.

Muhammad-Ali Abdur-Rahkman and DJ Wilson also saw the floor, but very limited time. The next day, they faced off against another current Oregon player, Villanova transfer Dylan Ennis. Ennis (6-foot-2) had this memorable block against DJ Wilson which essentially ended his freshman season.

Looking back at that recap, a game in which Ricky Doyle was a star, this line stand out:

Michigan was unfazed by Oregon’s token pressure, turning the ball over on just 13% of its possessions, and shot 49% on twos and 38% on threes for a 51.1 eFG%. Michigan’s pick-and-roll game faltered a bit due to Oregon switching every ball screen on the perimeter, but the Wolverines were eventually able to exploit those switches and just attack the rim.

Stop me if that sounds familiar. Attacking switching defenses has been a focus for the Wolverines over the last month and they’ll be put to the test once again.

Defensively, Michigan’s biggest problem in that game was on the defensive glass where it allowed Oregon to rebound 45% of its missed shots, including 5 offensive rebounds by Brooks.

These are two very different teams, but the with some of the same players, coaches and styles of play, that first meeting can provide at least a bit of insight about what to expect on Thursday night.