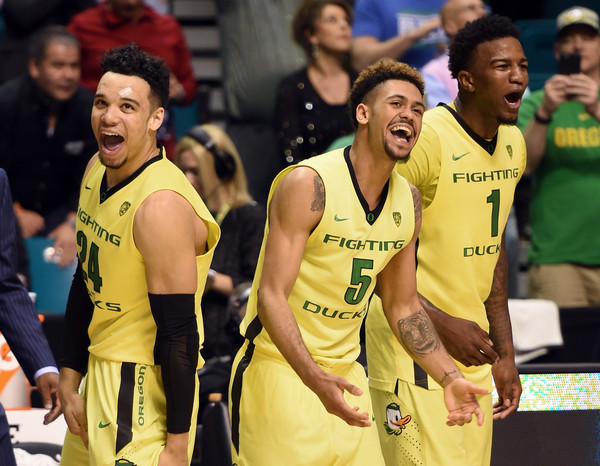 We’ve already looked at Oregon’s statistical profile at a high-level, but here’s a closer look at the Duck rotation as we get closer to Thursday’s match-up.

We’ve already looked at Oregon’s statistical profile at a high-level, but here’s a closer look at the Duck rotation as we get closer to Thursday’s match-up.

The first thing that stands out from Dillon Brooks’ shot chart is how effective he is in the middle of the court. He attempts 58% of his shots between the lane lines and touts a 61 eFG% on those attempts.

Brooks is effective in the middle of the floor because almost without relent he puts his head down and gets two feet in the paint off the bounce. He can drive right or left and just bullies his way to the rim. There’s nothing fancy about his takes to the rim, but to attempt 42% of his shots inside of five feet and still make them at a 62% clip is impressive considering how many of them he creates for himself off the bounce.

There are very few players with the size and frame that Brooks has who can put the ball on the floor and attack. He grades out in the 93rd percentile in isolation play (including passes) and the 90th percentile in pick and roll play (including passes). Often times he doesn’t even need a ball screen as he’s one of the most complete iso scorers left in the NCAA Tournament.

Brooks is not only one of the most-efficient players on this list, he’s also one of the biggest at 6-foot-7. Whether DJ Wilson (or Zak Irvin in smaller lineups) can contain Brooks off the bounce has to be one of the first concerns for the Wolverines.

If Brooks controls the middle of the court, Dorsey plays on the wings off the kick. He’s an elite shooter from the field and has been on a tear with an effective blend of three-point shooting and shots at the rim.

46% of Dorsey’s used possessions are catch and shoot attempts and he has a 58.7 eFG% on those shots, per Synergy. Another 22% of his offense comes in transition where he grades out in the 89th percentile, but he’s also effective in the ball screen game.  With a fifth of his possessions used in the pick and roll, he grades out in the 89th percentile nationally in terms of overall efficiency.

Dorsey, a former five-star recruit, might not be a complete player given his average passing numbers but he can change the game with his pure scoring ability.

Bell is known much for for his defense than his offense and rightfully so. The 6-foot-9, 225-pound junior has a 6-foot-11 wingspan and is projected a second-round pick in the 2017 NBA Draft. Bell is long, mobile and aggressive definitely and he’s dominant on both backboards. He’s nationally ranked in offensive and defensive rebounding rates, block percentage and steal percentage and was named the Pac-12 Defensive Player of the Year.

Bell is not just a help-side shot-blocker, he also appears to be versatile enough that Dana Altman will have no problem switching Bell onto Walton in the ball screen game and seeing how he does. That move worked for Louisville to negate Walton and Bell appears to have the traits (length, quickness and mobility) that you’d like in that situation.

Offensively, most of Bell’s scoring comes at the basket where he’s an elite finisher (69%).

He’s only hit a couple of shots outside of five feet this year, but that doesn’t mean he’ll be anchored to the post. Oregon will move him all over the floor in pick and pop, pick and roll, post-up or dribble hand off action and he’s an impressive passer from multiple areas of the floor. Here’s a reel of a few passes out of the high post, from the perimeter or on the block.

Freshman point guard Payton Pritchard starts at the one for the Ducks and has played very well. Dillon Brooks wants people to know that Pritchard is “not a typical white boy” and that he can play.

Pritchard’s overall shooting numbers are just okay — 46% on twos and 37% on threes while attempting more threes than twos — but his statistics are better than most freshman starting point guards. He’s a solid passer and shows the ability to pick up steals as well.

Pritchard shares the backcourt with another guard who has enough experience to make up the difference. Ennis started his career in 2011-12 at Rice before transferring to Villanova for two seasons. He opted to take a graduate transfer to Oregon last season (yes, he transferred out the year before Villanova won the National Championship) before injuring his foot and taking a medical redshirt. Now the 25-year-old Canadian plays an integral role in the Oregon lineup as a 6th-year senior.

Ennis is a glue guy, but he’s the best kind of glue guy: one who can make open shots. He’s 49-of-132 (37%) from deep and is also one of Oregon’s better perimeter defenders. He’s not as effective finishing at the rim, but he has to be guarded closely on the perimeter.

The key here is to run him off the line. He grades out in the 87th percentile nationally with a 63 eFG% on catch-and-shoot opportunities which make up 60% of his used possessions, per Synergy, but he’s just 1-of-10 on all jump shots off the dribble and he only made 9 two-pointers in Pac 12 play.

Bigby-Williams has stepped into the void left by the Chris Boucher injury. He’s a 6-foot-11, 230-pound junior who has been playing 14 minutes per game since Boucher’s injury. The Londoner shoots just 48% from the field (all on twos) and had struggled with turnovers, but he has size and decent shot-blocking numbers in limited playing time.

When Bigby-Williams is on the floor — either as a backup five or a second big at the four — Michigan has to look to attack. Those situations should provide more optimal mismatches than the standard small ball Oregon lineup.