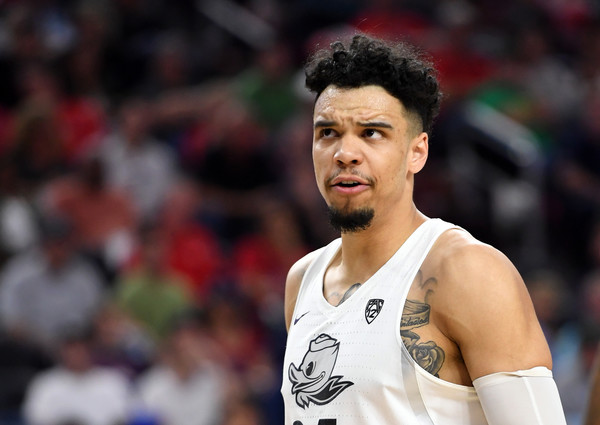 Michigan faces an Oregon team that has lost just three games since Thanksgiving, but also lost its shot-blocking big man to a season-ending injury.

Michigan is a 1-point favorite tonight as it faces the No. 3 seeded Oregon Ducks. The Ducks have lost just three games since Thanksgiving, when they were still easing star forward Dillon Brooks back into the lineup, but have been a trendy upset pick since losing their reserve big man, and No. 3 scorer, Chris Boucher to an ACL injury.

Despite the loss of Boucher, this is a team that tied for the Pac 12 regular season crown and didn’t lose a game at home all season. The Ducks blasted No. 2 seed Arizona at home by 27 and split with UCLA. Arizona got the best of Oregon in the conference finals, but even that game was decided by just three points.

Four Oregon rotation players played critical roles on last year’s team, which lost to Oklahoma in the Elite Eight, and will be looking to take the next step this year in Kansas City.

The most-important question when examining Oregon’s resume is hard to answer: how much worse is the defense without Chris Boucher. The last three games that Oregon played without Boucher are three of its worst six defensive performances of the season. But they also were against Iona, Rhode Island and Arizona — all relatively solid competition.

On the year, Oregon ranked 25th nationally in adjusted defensive efficiency. The Ducks ranked 1st nationally in percentage of two-point shots blocked and 13th in free throw attempts allowed — an impressive combination. The loss of Boucher (the No. 10 shot-blocker in the country) should have at least some negative effect on those numbers.

Oregon had the best defense in the Pac 12 at .97 points per possession allowed and it ranked 2nd in eFG% defense, 2nd in turnover rate (with a higher block and steal rate than anyone else in the league) and 2nd in FTA/FGA allowed. The only weakness was on the defensive glass where it ranked just 9th in the league.

Defensively, the Ducks hit all of the right marks in their Synergy profile as well. They grade out in the top-10 percentiles of transition defense, half court defense, isolation defense and the top-20 percentile against he ball screen. One moment of weakness could be against the roll man, where the Ducks grade out in just the 29th percentile.

Maybe Boucher’s injury has had a crippling effect on the Oregon defense, but if not the numbers are very impressive across the board.

The Oregon offense ranks 16th nationally and has scored at least a point per possession in 24 of its last 25 games.  The Ducks had some early offensive issues as they were without Brooks and working to reintegrate him into the lineup, but they had the No. 2 offense in the Pac 12 at 1.18 points per trip.

Oregon was the best shooting team in the Pac 12, boasting a 58.5 eFG% with 54.7% two-point shooting and 42.4% three-point shooting in league play. Those are really good numbers and better than Michigan’s 57.3 eFG% in league play. This team can shoot it and the five guards that rotate between the four perimeter spots in Oregon’s offense all shoot 37% from three or better.

The Duck offense features a lot of dribble hand-off motion to create dribble penetration and kick action. Oregon will spread the floor and try to isolate in the middle of the court with shooters on the perimeter.

Oregon only ranks 241st in adjusted tempo, but their faster offensive possessions (110th) and longer defensive possessions (323rd) speak to their ability to control the pace of a game and pick their spots in transition. As noted in the First Look, they are a very effective transition offense.

KenPom projects a 71-70 Oregon victory, giving the Wolverines a 48% chance at the upset. Michigan is a 1-point favorite in Las Vegas and considering that KenPom probably hasn’t fully adjusted for Boucher’s absence, this appears to be about as close to a toss-up as you can get.

The Wolverines have won 7 in a row and are just two away from a trip to Arizona, but this one could go either way.