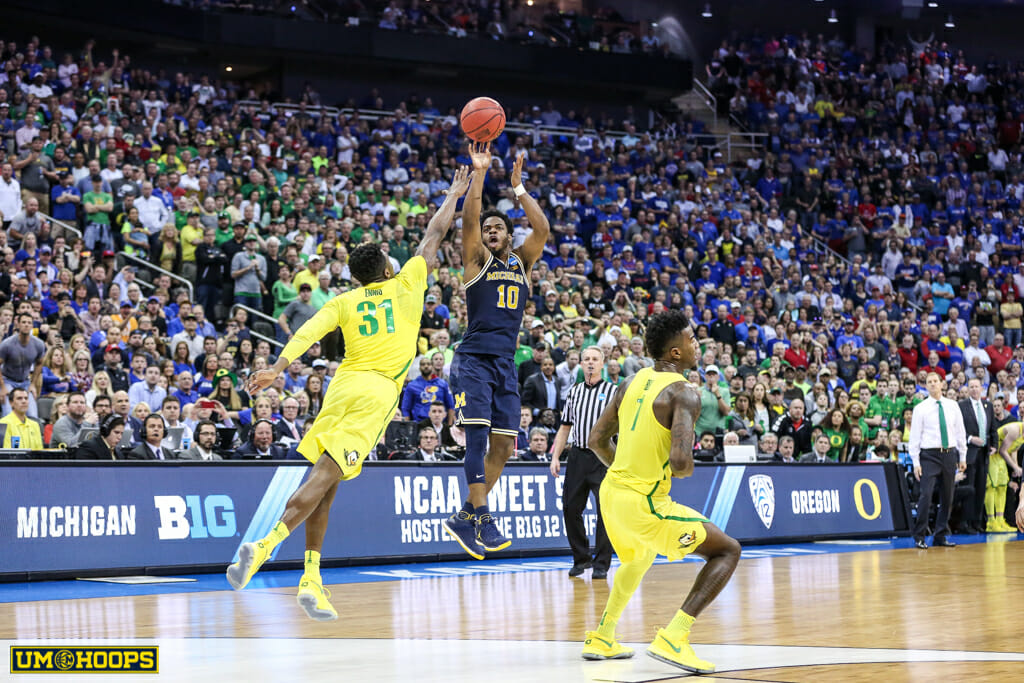 The buzzer sounded, and just like that, after everything, it was over.

KANSAS CITY — The buzzer sounded, and just like that, after everything, it was over.

With his arms over his head, Derrick Walton stood facing his bench.

It was his shot that had caught iron instead of net, bouncing off the front of the rim and finding its way into Jordan Bell’s hands, leaving the entirety of the Michigan basketball team stunned into silence.

John Beilein was surprised. He thought the Ducks, with two to give, would foul his point guard as soon as the Wolverines inbounded the ball.

Oregon did not foul.

Abdur-Rahkman, who began running towards the rim in anticipation of grabbing an offensive rebound, said he stopped because he thought the shot was good. Wilson, who was on the court for the final seconds, said he got ready to celebrate. Irvin, who has spent the last four years alongside No. 10, said he’d seen Walton make that shot “thousands of times.”

All three thought the shot would fall.

The shot did not fall.

It was, in all circumstances, the best shot Michigan had, from the player who they most wanted — and needed — to pull the trigger.

The Wolverines were carried for most of the night by their senior point guard from Detroit. Walton kept his team in the game through a lethargic and ineffective first half, scoring or assisting on nine of his team’s eleven field goals.

And then, after going nearly 11 minutes in the second half without attempting a shot, Walton took over once again.

A stepback jumper along the baseline to cut into a five-point deficit. A triple that gave his team a one-point lead. And then, another jumper that extended Michigan’s lead to three with just 2:02 left, forcing a timeout from Oregon coach Dana Altman.

Somewhere in there, Walton turned to his bench, pointing to his wrist while yelling, “You know what time it is!”

It was very clearly Walton’s time, like it had been for much of the year, so when he found the look that he wanted and launched it, there were no qualms — like there had been on an earlier possession when the offense bogged down, leaving Wilson to miss badly a 3-pointer. And there was no doubt in the Wolverines’ minds that they would survive. It was just how the story was written, how the script was supposed to have been read.

It was a rocky, often ugly affair between two teams who seemed like they never wanted to make that one backbreaking run that would seal things up. Instead, neither team could pull away, trading the lead back-and-forth.

Michigan did not play as well as it could have. It committed seven turnovers alone in the first half, shot under 40 percent and generally looked out of whack on offense. Mistakes piled up late, as well: a missed box-out on the front end of a one-and-one that Bell made the Wolverines pay for. The uneven offensive possession coming out of a timeout that ended with Wilson’s halfhearted three.

Yet, for all the missed plays, Michigan was still right there with Oregon. It seemed like the Wolverines would simply reach deeper and pull out another victory.

After all, the story was too good: the near-devastating plane crash that had given Beilein and his players a new perspective and philosophy about life. Four wins in as many days at the Big Ten Tournament. The shootout against Oklahoma State, and the upset of Rick Pitino and Louisville.

They will be talking about this season for a long time. Few had expectations of a second-weekend run after the way this team looked in January and early February.

It is still undoubtedly a good story. But now, it will be accompanied with the same sentiment Beilein, Walton and his teammates had after his shot fell off the rim — the feeling that their journey ended far too abruptly.