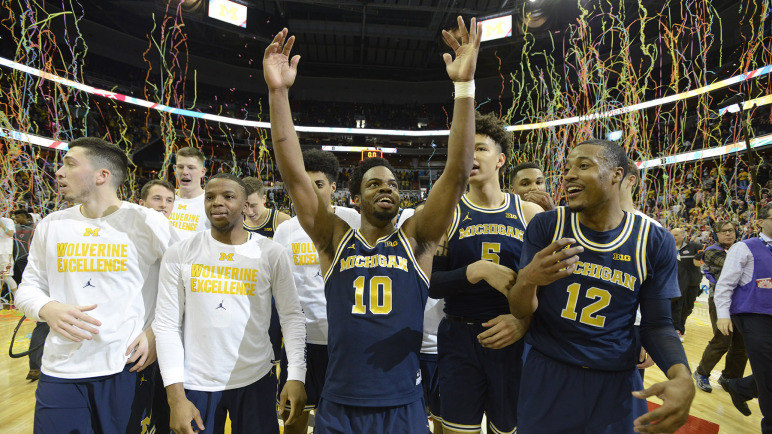 The lessons learned from John Beilein and Team 101.

Teams don’t do what Michigan did this season. They don’t go from decidedly meh to really, really good. They don’t give fans reasons to skip games, to question the future of the program, only to inspire unbridled joy in the same people. They don’t go from Big Ten afterthought to conference tournament champions. And they don’t go from a team that might sneak into the NCAA Tournament to one shot away from the Elite Eight.

Michigan did all that and more.

For what seemed like too much of the season, this quote from Zak Irvin was painfully truthful: “We do a lot of talking how we want to get stops, want to do this, want to do that, and it’s not showing.”

Irvin and fellow senior Derrick Walton, Jr. were—has it sunk in yet that we’re talking about them, as Michigan basketball players, in the past tense?—the team captains and spokesmen. They’re careful not to provide bulletin board material but honest about the team’s shortcomings.

And this team stunk at defense. As much as John Beilein likes to reference the sport, this isn’t football. In hoops, the same players who play offense have to defend the other team. And the 2016-17 Wolverines struggled with the latter.

Beilein was at a dead end, but he was going to keep driving straight ahead. He repeated the words “grit” and “edge” a lot, wishing his players had more of those intangibles. He talked about a “tape delay” that was paralyzing his players in key moments despite elementary schemes. “Our worst defensive teams were not like this,” he said. But he refused to believe things couldn’t improve.

Then, one day, they did. After Michigan lost at home on Feb. 4 to an Ohio State team that would finish 17-15 and lose to Rutgers in the first round of the Big Ten Tournament, the Wolverines did not play another bad game the rest of the season.

There’s something about covering a team and listening to its coach talk shop multiple times a week for nearly five months. You pick up phrases you’d never heard before, like “bowl of cherries,” and work them into your own conversation. You spend a lot of time thinking about close-out technique, getting two feet in the paint, switching ball screens. You value every possession in pick-up games at the YMCA.

Beilein, like any veteran coach, can burrow into your basketball mind like that. But if you want to remain realistic about the team, you can’t become a puppet. In early February, it was fair to think Michigan would not get to the NCAA Tournament. By the time the Big Ten Tournament tipped off, believing in a deep run was just as reasonable.

The negative connotation of being a “jump-shooting team” became Michigan’s greatest asset. Perhaps no other team in the country started five guys who could shoot threes. Walton morphed into the outlier Beilein pined for, a clear alpha dog who realized, at the best possible time, that he was an awesome scorer.

Michigan’s allergies to turnovers and fouls mattered a lot more once the defense could actually force some misses and grab rebounds. Irvin often wears a bracelet with “Proverbs 27:17” written on it: “As iron sharpens iron, so one person sharpens another.” By giving just a little more effort in practice and growing from setbacks, this team became dangerously sharp.

Michigan was peaking in March, heading into the league tournament in Washington, D.C. The real-life effects of the plane accident should be appreciated. Beilein, especially, and many of the players were changed by that aborted take-off and emergency exit. From a basketball perspective, though, the incident may have been overstated. The Wolverines had found their groove, and a malfunctioning aircraft wasn’t going to halt their momentum.

Michigan played six straight games against NCAA Tournament teams to close the season. It won the first five to collect a banner and reach the Sweet 16. A one-point loss, which could have been a buzzer-beating win, ended the season abruptly. March Madness is cruel but fair in that way.

Recency bias can be strong in sports fans, but the unfortunate final minutes of the final game don’t erase what came before it. Saying Michigan was lucky isn’t quite accurate. Perhaps this metaphor is: When good fortune did knock on the door, the Wolverines were home to answer. The bounces went their way in last-minute tournament wins over Purdue, Oklahoma State, and Louisville.

It’s also worth pointing out that Michigan had to be the healthiest team in the country. No player missed a single game or was limited in any meaningful way because of injury. Irvin played the most minutes in Division I. Walton was second. Michigan fans, of all people, should appreciate that given the way the past few seasons have gone.

Remember, teams don’t do what Michigan did this season. A squad that snuck into the Big Dance last year brought its major contributors back. Skeptics saw that as a negative: They questioned the upside of a team lacking impact freshmen and led by seniors that may have maxed out their talents.

Charles Matthews, Andrew Dakich, Sean Lonergan, and Austin Davis were a handful on the scout team. Brent Hibbits, Fred Wright-Jones, Jon Teske, and Ibi Watson had their early-season moments and will be back again next year. After the Oregon loss, next year was underway.

“Time is a friend of the truth,” Beilein said after that game, uttering another of his favorite sayings. “The truth is it was a great run. … This team has really grown exponentially during the year. Over time they’ll learn that.”

There was reason to believe Wagner already had. Asked after the final game to reflect on the past two weeks, he said: “Well, we won a ring. We survived a plane crash. We played to the best of our ability in a couple games. We put the world on notice. It was special.”