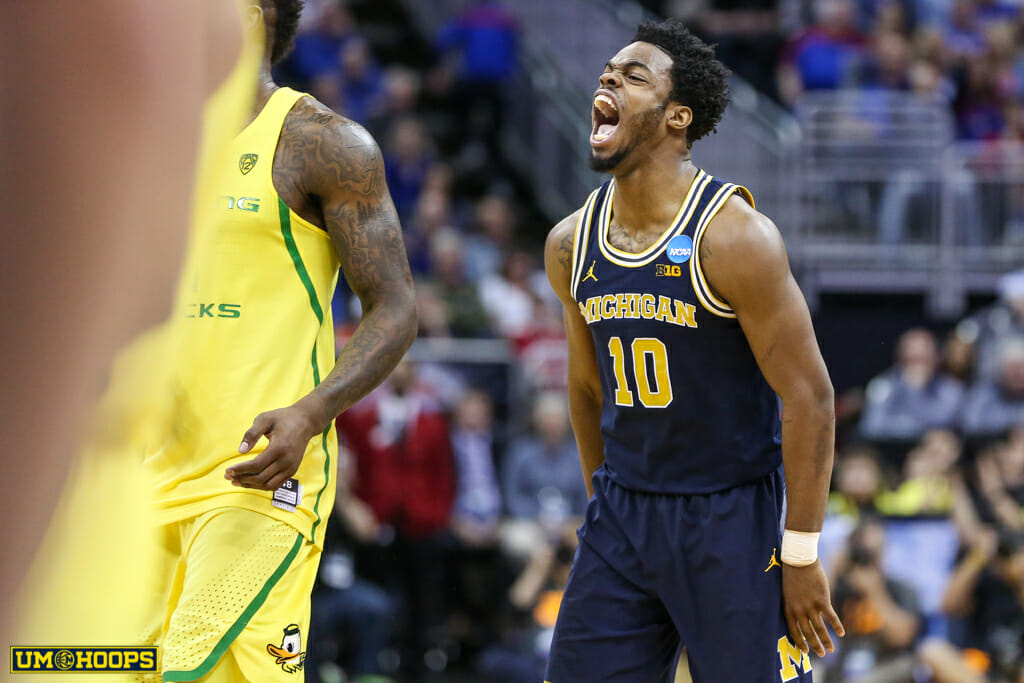 Back in October, I provided my take on hypothetical over/under props that were provided on the forum for everything from Michigan’s defensive efficiency to Duncan Robinson’s three-point shooting.

Now that the season is over, here’s a look back at how accurate the projections were.

Back in October, I provided my take on hypothetical over/under props that were provided on the forum for everything from Michigan’s defensive efficiency to Duncan Robinson’s three-point shooting.

Now that the season is over, here’s a look back at how accurate the projections were.

This one went about as expected. Duncan Robinson’s playing time decreased (50% of available minutes from 76%), but his three-point efficiency was consistent and he was actually more efficient in Big Ten play than in non-conference play, flipping his previous year’s stereotype.

O/U 70.5 KenPom AdjD ranking at the end of the season

Whoever set the over/under at 70.5 hit the nail on the head as Michigan ended up right there at 70th overall. The actual adjusted defensive efficiency number actually checked in a couple point higher, but it is more important to compare the overall rank.

There were months when Michigan had a top-50 defense, but there was also that January stretch where Michigan had a defense that looked like it should be ranked 150th or worse. In the ned, the 70th overall ranking probably does it justice. An improvement, but not consistent enough to make a real jump.

Preseason Take: I’m going over because we haven’t seen a John Beilein-led Michigan team hold its conference opponents below a point per possession.

Again, if you just looked at the last month of Big Ten play then Michigan might have gone under here, but in the end it wasn’t very close. January happened and after that there was no chance of cracking a point per possession defensively.

Number of games played before we will see Wilson and another big (6’10” or taller) on the floor together. O/U 1.5

It took three games for Wilson to crack the starting lineup, but he played next to Moritz Wagner on opening night against Howard and never looked back. Wilson smashed just about any expectations for his performance in New York City and then really never looked back.

Actual Result: Under, .24 threes per game

Donnal just didn’t see enough playing time to come close to this number, but he did shoot 50% from three on 18 attempts.

Preseason Take: I’ll go under, but only by a thread. I think 10 games is probably the most likely win total for this group in conference play, given the schedule.

I hit this one pretty much right on, but looking back at the season there are probably more games that Michigan lost and should have won than games it won and should have lost. This one easily could have gone over and that was proven in the Big Ten Tournament.

Preseason Take:I’ll go with the push here, leaning under, because I think Abdur-Rahkman probably checks in right around 30, but not much higher.

This was a slight over, but close to a push. I was overrating the potential of Xavier Simpson cracking the rotation, but underrated the influence of DJ Wilson playing basically the entire game at the four spot.

Preseason Take: Abdur-Rahkman averaged 2.3 per Big Ten game last year and grew as a distributor over the course of the season. That seems like a safe over bet as he continues to improve his distribution.

Actual Result: under, 2.0 assists per game

This was a miss and one of the most concerning ones as the Wolverines will need Abdur-Rahkman to emerge as a more consistent creator for his senior season after losing a pair of senior guards.

O/U 1.5 – Number of players to foul out of a game during league play.

Presaeson Take: My first reaction was to go with the under here, just because of how rarely Michigan players have fouled out under John Beilein, but I’ll go with the over for two reasons.

I found four different Michigan players — Moritz Wagner (4), DJ Wilson (1), Duncan Robinson (1) and Derrick Walton (1) — who fouled out of a Big Ten game and I might have missed a few. That was to be expected a bit with the bigger role for Wagner, but this one smashed the over/under projection.

Preseason Take: I’ll go with the over because we’re looking at replacing about 20 minutes per game from Chatman and Dawkins and I think that means Wilson or Watson cracks double digits.

o/u 4.5 Number of minutes per game where we play a lineup with Walton, Simpson and MAAR all on the court at once.

Preseason Take: I’ll go over here, just because I’m intrigued by the possibility.

Actual Result: I don’t have the exact numbers, but this has to be an under. Simpson only played 8.7 minutes per game and the majority of those were resting Walton or Abdur-Rahkman. We saw them together for spurts, but they were measured in seconds rather than minutes.

Preseason Take: I’ll go with the over, but if it goes under then Michigan will have a significantly improved defense and Donlon will deserve a lot of the credit.

Another spot-on preseason projection by one of our message board odds makers. Michigan finished right on the nose at 50% two-point shooting allowed for the season and a bit worse in Big Ten play at 52.4%.

O/U 4.5 Michigan wins versus teams that end up making the NCAA Tournament

Preseason Take: I’m taking the over.

Actual Result: Over, 10. This one wasn’t close and Michigan’s late run through the Big Ten and NCAA Tournaments blew it out of the water.

Preseason Take: I’ll take the over, but it’s going to take some waiting.

The road performance never quite came together as Michigan lost two road games in overtime and another on a last-second play. On the flip side, the Wolverines were 8-1 on neutral floors for the season.

Preseason Take: I’ll take the under because I don’t foresee many double-digit rebounding nights.

Actual Result: Under. Wagner had one double-double (vs. Indiana). His scoring production was always there, but as expected he never quite rebounded the ball well enough to reach a double-double consistently.

O/U 0.5 times where JB opts not to autobench

Preseason Take: Not really sure about the specifics of this one, but I’ll go with under if you mean the pure act of taking a guy off the court when he’s whistled for his second foul in the first half. I’ll go with the over if you mean leaving him on the bench for the entirety of the half.

Actual Result: Beilein brought Derrick Walton and Zak Irvin into several first halves with two fouls and notably even put Moritz Wagner on the court in the NCAA Tournament with two first half fouls.

Preseason Take: I’ll go under in the non-conference and over for conference play.

O/U 1.5 wins in the NCAA tournament this year

Preseason Take: I’ll go under for now until we get a better idea of just how this team is going to come together.