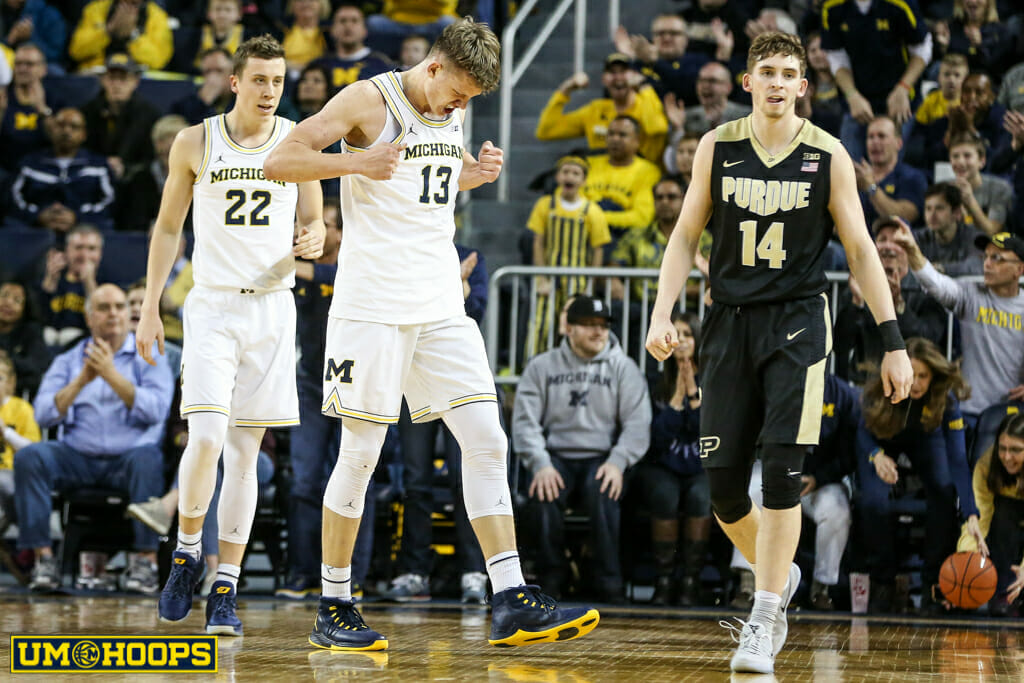 At the postseason banquet, DJ Wilson and Moritz Wagner spoke about their NBA draft decisions.

With the Big Ten Tournament trophy (and net) displayed on stage, Michigan’s coaches and players reflected on a remarkable season while handing out awards both serious and silly. While the purpose of the banquet was to reflect, it’s presently more interesting to look ahead.

Moritz Wagner and DJ Wilson have each declared for the NBA draft, though neither has hired an agent. Michigan coach John Beilein has not influenced their decisions—and won’t as the process continues—but he did give them advice after the season ended.

“I encouraged them to look at this aggressively and go after this,” Beilein said. “‘Don’t go into this if you’re not going after it all.’”

Wagner said he’s not even framing it as a decision to stay or go right now; he’s just thinking about the next workout. At times, Wagner sounded like someone who wasn’t fully embracing Beilein’s advice to go “after it all.”

“I think it’s a great opportunity to gather information about yourself,” Wagner said. “I’m testing the waters.”

Wilson said he is not leaning one way or the other right now and that entering the draft was in the back of his mind at the end of the season. But, he added, “Having that option (to return to school) is definitely a great thing.”

Both players hope to be invited to the draft combine in Chicago May 9-14, though there’s a slight chance a decision—one way or the other—could come before that.

“It certainly would help us the sooner they make a decision,” Beilein said. “But I don’t want to make it about us. I want it to be about them.”

The norm for college basketball coaches in 2017 is dealing with players who may or may not leave early for the NBA draft while recruiting high school players and considering graduate transfers. Beilein is learning something new every day about this new reality.

He’s currently operating as if he has one scholarship available but recognizes Wilson or Wagner could free up another one or two. Beilein doesn’t expect any more attrition, “But we’ve been surprised before,” he said. All he can do—with any prospect—is be honest about Michigan’s situation.

Michigan is in the mix for several graduate transfers, but Beilein will wade cautiously into that pool of players. “Some coaches have told me, ‘Be careful.’ Others said, ‘It saved our season.’ We’re going to find the right guy who has the right character, who values Michigan, if we go that route.”

Asked about the concerns of bringing in a fifth-year player, Beilein said, “We have a tremendous culture in that locker room. (You want to) make sure you don’t do anything that gets in the way of that culture.”

As far as positional needs, Beilein said he is not focused primarily on a point guard, for instance. He said the incoming guards, Eli Brooks and Jordan Poole, should be able to help at that position.

“Eli definitely,” Beilein said when asked if both incoming guards could man the one. “Jordan can play more 2 or 3, but could be a back-up point in time. He can pass.”

Beilein noted that Muhammad-Ali Abdur-Rahkman has to grow as a distributor to man the point regularly although he can defend the position.

There is a good chance graduating senior Mark Donnal will be playing at one of these schools next season: Creighton, Vanderbilt, or Clemson. The first two were in the NCAA Tournament; Clemson has been on the bubble in recent years but not been since 2011.

After seeing Donnal’s name on the transfer list and watching film on him, those schools reached out to him. He is now in the process of setting up visits. Roster composition, style of play, and academics will all factor into his decision.

“I’m definitely looking for somewhere I can play significant minutes right away and possibly start.”

Said Beilein during the ceremony: “Mark is going to be playing somewhere next year and I’m going to be one of his biggest fans.” Donnal won the “Iron Man” award at the banquet; Beilein noted he was never in the trainer’s room.

John Beilein joked that this year’s team “captivated us in March and held us captive in December.” Andrew Dakich said he bought his first suit before the event at “Jos A. Bank.” Dakich, a podcast host, was given the award for the player who “talks the most but knows the least.” Zak Irvin appeared via pre-recorded video; he is in Portsmouth, Virginia playing in a tournament with other seniors that hope to play professionally.

DJ Wilson won best dressed, and was among several players who didn’t wear socks. He shared the Most Improved award with Wagner. “We don’t want to win the press conference in October,” Beilein said, presumably referring to his program’s ability to develop players, even if they’re not the highest-rated recruits. “We want to win in March.”

An extensive highlight video included Maverick Morgan’s infamous press conference (twice!) and clips from Michigan’s run to a Big Ten Tournament title and Sweet 16. Before Michigan even starts its campaign to build on those successes, many questions will be answered.