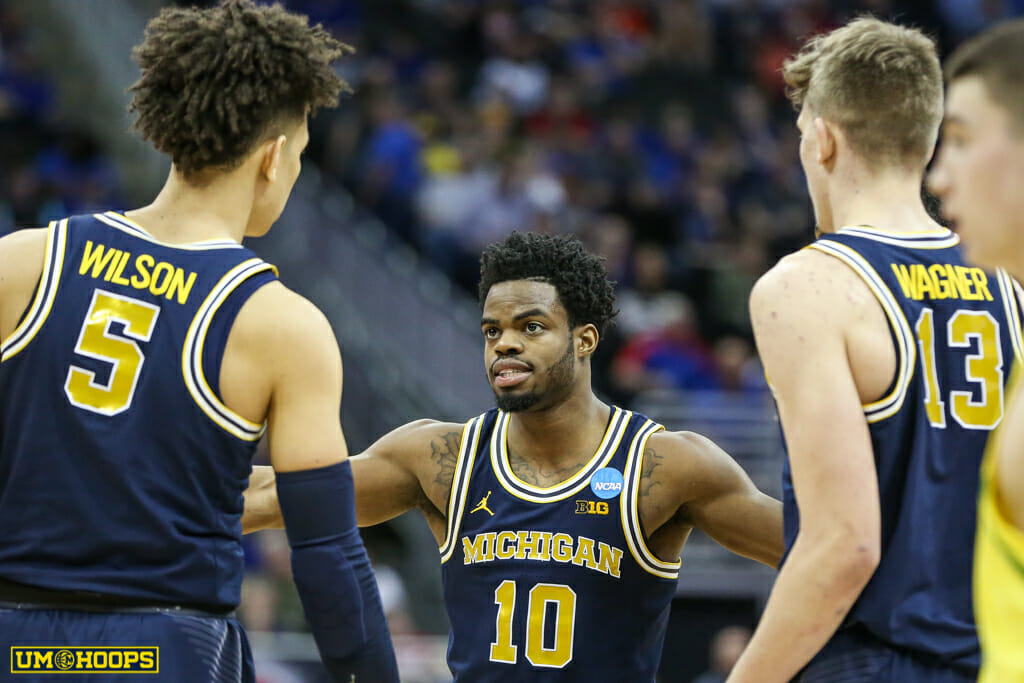 The Wolverines will play in an all-Michigan doubleheader at the new Little Caesers Arena in Detroit in December. John Beilein discussed the announcement along with providing an update on DJ Wilson and Moritz Wagner’s NBA Draft process.

Michigan will play Detroit Mercy on Saturday, December 16, in the first game of an all-Michigan doubleheader at Little Caesars Arena. Michigan State will take on Oakland in the second game.

The announcement came outside the arena on Tuesday morning in the cold and rain. The future home of the Detroit Pistons is still under construction, and so members of the media wore hard hats, safety goggles, and neon vests to cover the press conference. It is unclear why the coaches did not need the protective attire.

The event organizers as well as the coaches—particularly Detroit Mercy’s Bacari Alexander and Oakland’s Greg Kampe, rivals in the Horizon League—would like to make this an annual event. Michigan head coach John Beilein said he’d be “very open” to that idea. While Beilein did not address this specifically, there is hope that an event like this will help keep local recruits in state. There is no catchy name for the event yet, so allow this writer to suggest the simple and alliterative “D-Town Doubleheader.” It will be a single-admission event.

Little Caesars Arena will host the Horizon League tournament next season and has already been named an opening-round site for the NCAA Tournament in 2018 and 2021.

The Michigan-UDM will pit Beilein against his former assistant. “I think it’s going to have a weird feel to it initially,” Alexander said about facing his former boss. “But as we get into the flow of the game, I think the competitive juices will be flowing.”

Asked if the players on the floor will notice similarities in schemes, Alexander said that while he learned a lot from Beilein, he doesn’t expect Michigan to look the same. “Coach Beilein is a constant agent of change. Just when you think you know, you don’t know. That’s what keeps him very formidable as a tactician.”

Beilein said that NBA draft combine invites should be extended very soon (within a day or two, possibly). In the meantime, Moritz Wagner and DJ Wilson are working out in their respective hometowns of Berlin, Germany and Sacramento, California.

Michigan is still acting as if it only has one scholarship open, but “when you have two student-athletes interested in the NBA, you have to prepare for all options,” Beilein said.

As for the balancing act of recruiting high school players and graduate transfers at the same time, all while the roster is in flux, Beilein said: “We try to be as transparent as we can. The minute you tell some one they might be (your) No. 2 (choice) out of 200, he thinks he’s No. 200. We have one scholarship right now; we may have more. That’s what we tell people.”

The addition of Jaaron Simmons, a graduate transfer from Ohio University who would be eligible immediately, could fill the lone remaining spot for now. When asked about that report, Beilein said, “I can not comment,” but a person close to the program confirmed that it is a done deal.

Regardless of who will fill out the roster next season, Michigan still has four or five games left to schedule. We know the team is going to the Maui Invitational, hosting UCLA, and traveling to Texas. When asked about a game with Air Force, Beilein said, “not yet” (it is unclear if he meant the game is not happening this season or if it hasn’t been finalized yet).

Keep up with other scheduling dates on our future schedules page.