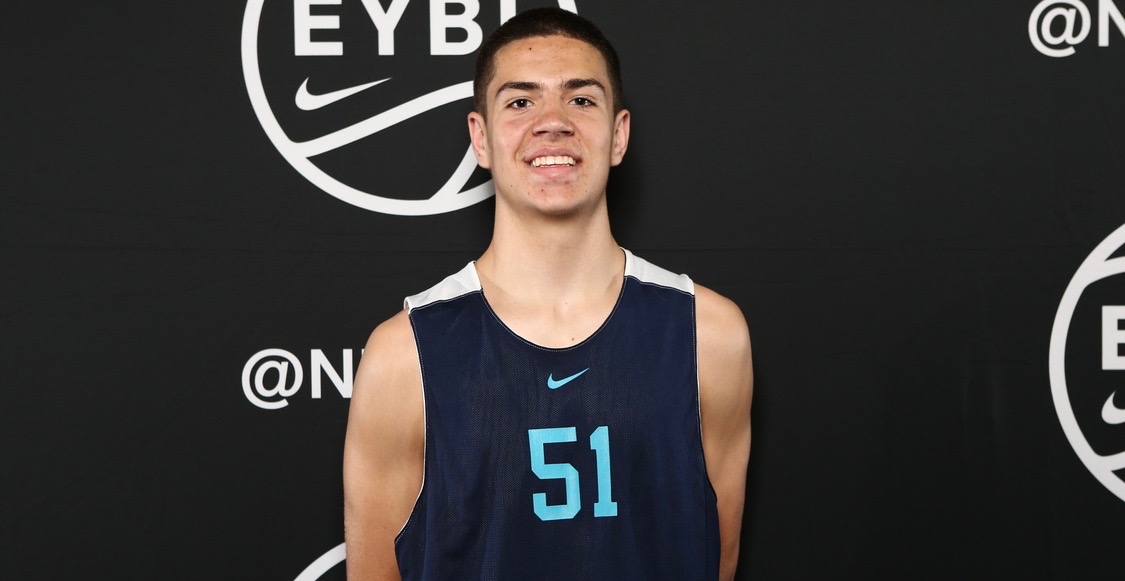 Michigan got involved in Cole Swider’s recruitment in April and made his recently announced top-8. Here’s what the top-150 forward had to say about Michigan.

Cole Swider admitted his shot wasn’t as good during the second Nike EYBL session as it had been in the first.

That was no matter, though, for the 6’8 wing from Rhode Island — he simply found other ways to score. Through both sessions, he’s averaging 20.6 points and six rebounds per game while shooting 42% from three.

Swider, ranked No. 143 overall in the 247Sports Composite rankings for the class of 2018, attributes his breakout performance to a more aggressive approach. He also believes he showed onlookers that he can do more than just shoot — especially in the second session, when his 3-point shot wasn’t as accurate as before.

And it appears a large number of high-major college coaches would agree with that sentiment. Since the spring began, Michigan, Indiana, Purdue, Florida and Texas have all jumped into the fray for Swider.

John Beilein had the chance to watch Swider at the first EYBL event, and the Michigan coach was immediately enamored with what he saw.

“Coach Beilein saw me play in Virginia, and he thought that I fit their system perfectly,” Swider said to UM Hoops Wednesday. “He called my dad and he called me, and he said, ‘We’d love to have you at Michigan,’ and all those things. He wants me to come up and visit campus.

“He said they specialize in guys like me — guys who can shoot the ball, know how to play the game and love to work. He said I’m a perfect fit for them, and they can have spots for me to play at with some guys leaving for the draft and some guys graduating.”

Since then, the two parties have been in constant contact. Swider says he has talked to Beilein almost every other day since Michigan began recruiting him. In addition to telling Swider about how he would fit in Michigan’s system as a ‘3’ or ‘4’, Beilein has pitched him on the academic merit of the university, the facilities, and the environment of a visit on a football Saturday.

Those efforts seemed to have paid off. Despite how brief Michigan’s recruitment of Swider has been, the Wolverines made the list of his top eight schools, along with Syracuse, Villanova, Miami (FL), Indiana, Creighton, Xavier, and Providence.

As of now, he plans on re-evaluating that list after the summer, trimming it down to three or four, and planning his official visits in the fall based off his new list. Then, he hopes to make a decision after those visits.

Swider is unsure of any unofficial visit plans, stating he wants to get through the EYBL season before figuring things out. He expressed interest in making a trip to Ann Arbor, though — where Beilein has told him an official scholarship offer awaits.

“His thing is he wants you to get on campus. Whenever you step on campus, you’re going to get an offer,” Swider explained. “I took that as an offer. His thing is, ‘I wouldn’t want you to commit to a school where you’ve never been to and never seen anything of before.’ So it’s like, ‘You have a scholarship the second you walk on campus.’ That’s how he explains it to me.”

A visit will be a prerequisite to things moving any further between Michigan and Swider. But it’s clear that Beilein’s interest was piqued by what he saw at Hampton — and the feeling is mutual.

“I think they’ve had a lot of guys like me like Nik Stauskas, and I think Duncan Robinson plays a little like me now,” Swider said when asked what he likes most about Michigan. “And just their history: they’ve had a great history of winning basketball, and I just want to learn more about them.”