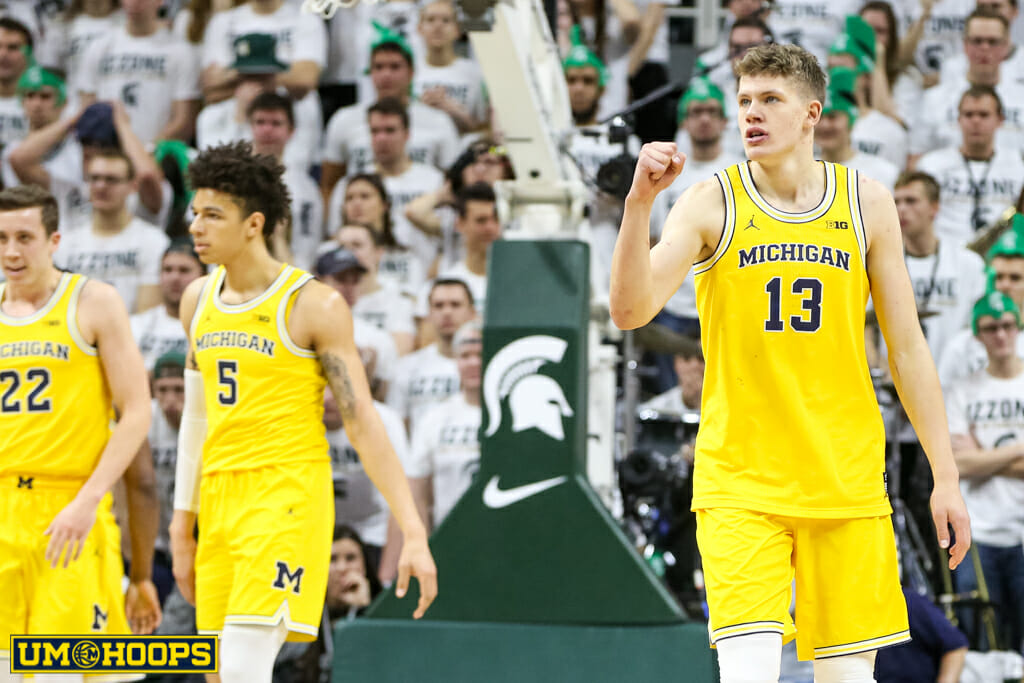 Two ESPN experts who will be covering the NBA Draft Combine this week discuss the Michigan prospects.

In advance of this week’s NBA Draft Combine, ESPN basketball analysts Jeff Goodman and Fran Fraschilla, who will commentate the event, joined a conference call with media this afternoon. Here is what they had to say about the Michigan players who will be participating at the Combine in Chicago:

Goodman: “The NBA guys I talked to said, ‘Moe Wagner, come back.’ It’s great that he played well at the end of the year, but it was a small sample size and they said, ‘He’s got good upside, but come back and become a better rebounder, become a better defender.'”

Fraschilla: “If you take away the 26 points versus Louisville and the good game against Minnesota (in the Big Ten Tournament), he did not play great the rest of the postseason.”

Goodman: “(NBA people) felt that he did more to justify testing the process (than Wagner). They felt like he could be (drafted) 25 to 40. But again, almost everyone I talked to said both should come back. Wagner a thousand percent. Wilson, if he comes back, they felt like he could play his way into the first round for sure next year.”

Fraschilla: “Neither (Wilson nor Wagner) is physically ready for the NBA. … DJ is really interesting because he’s the quintessential ‘3 and D’ big guy right now. He shoots threes and he’s got great length to defend. But even he got bullied inside. DJ could get drafted in the first round, late, but he ain’t playing in an important NBA game for at least a couple of years.”

Fraschilla: “Kudos to Derrick Walton; he had a monster season. He’s probably, likely a D-League player. But he shoots the cover off the basketball. … I just watched him give Juwan Evans fits and some people think Juwan Evans is a first rounder, and he could not guard Derrick Walton.”

For more information on where these players might get drafted, check out Dylan’s latest roundup. It’s worth noting, as Goodman did on the call, that second-round picks are signing guaranteed contracts with more frequency. As this NBC Sports article from last year points out:

“There’s already a school of thought that players are better off going early in the second round rather than late in the first, that the freedom to negotiate a shorter contract trumps the lower initial salary.

“Now, second-round picks can probably have their cake and eat it too – a higher initial salary and more freedom.”