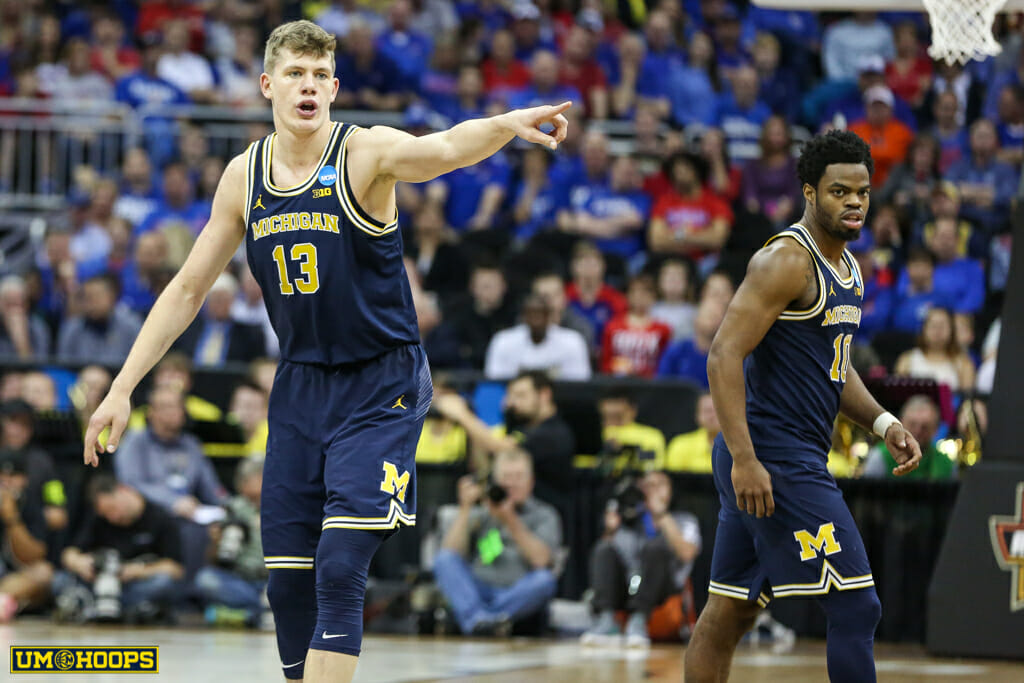 The NBA Draft Combine had long been the most important date on Michigan’s offseason schedule as it was Moritz Wagner and DJ Wilson’s opportunity to prove their draft-worthiness on the big stage.

Here’s a rundown of how the week went for Wilson, Wagner and Derrick Walton and where their draft stock stands with less than 10 days until the withdrawal deadline.

The weekend didn’t quite go as planned for Wilson, who had to pull out of all athletic testing and drills due to a quad injury, but his stock also appears to be on the rise. Wilson measured very well and seemed to be generating buzz, even without participating fully in the combine.

Wilson moved up to the No. 30 spot in the latest Draft Express mock draft and Jonathan Givony was impressed by his measurables.

This is our first look at the official measurements for Michigan redshirt sophomore D.J. Wilson.  He measured at 6’10.5 with shoes, weighed in at 234 pounds and posted an impressive 7’3 wingspan.  His measurements are very similar to those of former first round pick Gorgui Dieng who measured at 6’10,75, with a 7.’3.5 wingspan and weighed 230 pounds at the 2013 Combine.  Wilson’s length, fluid athleticism, and budding perimeter skill set certainty make him an intriguing prospect should he choose to stay in this year’s draft.

Sporting News called Wilson a combine winner thanks to his impressive measurements.

Michigan’s D.J. Wilson is another prospect who had never been measured officially before, but came in with the goods on Thursday. Wilson was over 6-10 with a 7-3 wingspan and a 9-foot-1.5 standing reach that should allow him to not only play the 4, but to slide down to center in some favorable matchup situations. He pulled out of the five-on-five portion of the event with a quad injury

Wilson, like Wagner, was listed on Chad Ford’s ‘return to school’ team.

Michigan’s Moritz Wagner and D.J. Wilson, Texas’ Andrew Jones, SMU’s Semi Ojeleye, Purdue’s Caleb Swanigan, Maryland’s Justin Jackson and Arizona’s Rawle Alkins all are in serious risk of not getting drafted in the first round if they stay in the draft. Perhaps one or two make the cut, but most of them are looking firmly at the second round at this point. None of them did enough this week to really push them over the top.

For a look inside Wilson’s decision, here’s MLive’s Brendan Quinn.

“I’m not too sure yet,” the 21-year-old said. “I don’t know how this will affect my stock or whatever. I haven’t really gotten too much feedback, but once I do, I’ll look over it with my family and my coaches and go from there.”

One thing Wilson seems to know for sure is that if he is not all but assured of being a first-round pick, he will return to Michigan for his redshirt junior year.

“If it’s anything second round, then I don’t really think that I’ll be staying in the draft, I’ll probably come back to school,” Wilson said. “That’s the good spot that I’m in — I don’t have a bad choice either way.”

Moritz Wagner had an up-and-down weekend overall. He played very well in the first day of 5-on-5 action, but struggled on day two. Wagner also had mixed results in the athletic testing as he registered just a 25.5 inch standing vertical leap, tied for fourth worst at the combine.

Wagner’s performances in the five-on-five action should be familiar for most Michigan fans. On Thursday, he started hot and hit an early three and then finished with a solid 13 points on 5-of-11 shooting with 4 rebounds and three steals. He struggled with his shot Friday and never got quite locked in, and had just 6 points on 3-of-15 shooting (0-4 3pt) with 4 rebounds.

Mo Wagner having a rough game today. Struggles to finish through contact + J not falling. Huge ?s defensively. Guess he returns to Michigan.

Sam Vecenie definitely thinks Wagner should go back to Michigan.

Center Moritz Wagner was arguably the worst player in the five-on-five portion this week. In his first game, he posted 13 points, but his team was much better when he was off the floor as he posted a minus-25 plus/minus while struggling against big men like Omer Yurtseven. Then, in the second game, he went 3 of 15 from the field as he posted a 1 for 8 mark from 3 over the two games. Every time he left the floor, his team went on a run. He also didn’t measure well, and none of his athletic testing stood out. Sometimes kids just want to be done with school, and I respect that. But if Wagner was to enter the draft, he would run the risk of going undrafted given the obvious defensive and athletic limitations he showcased not just here, but also during the entire college basketball season.

247 Sports recapped all of Wagner’s measurements from the event.

MLive spoke to Wagner at the combine and he made it clear that he’ll return to Michigan if he doesn’t think he’ll be a first round pick.

“It’s a hard decision,” Wagner said. “I can’t really say there’s a certain range. I can’t really say (I’ll enter the draft) only if this and this (happen). I’m a guy who wants to feel like I belong somewhere, where people believe in me. …

“So if I have a feeling that a team believes in me that much to draft me in the first round, I have to seriously consider that. As long as I don’t have that feeling, I won’t risk losing (two) years of eligibility at Michigan.”

The latest Draft Express mock draft doesn’t have Wagner being selected in the first or second round.

Sporting News notes that Wagner’s height and wingspan measurements reinforce that defense is an issue for him at the next level.

Moritz Wagner also got his first set of measurements, and came in slightly under 7-foot with a 7-foot wingspan. Wagner had quite a few defensive problems in college, and those measurements should continue to raise concerns as to whether he has the potential to become a plus player on that end.

One impressive note about Wagner’s combine numbers? He has huge hands.

The sophomore, who is testing the draft waters, measured 6’11.25 with shoes on (95th percentile) but posted just a 7’0 wingspan.  His hand width measurement of 10.75 was tied with Harry Giles for the largest measured at this year’s combine.  Was has similar dimensions to Enes Kanter who measured 6’11.25 with a 7’1.5 wingspan at the 2011 NBA Combine.

Walton had 9 points and 7 assists on day one but pulled out of 5-on-5 action during the second day.

Could Walton make the NBA? He’s not giving up on the dream.

Expect both Wilson and Wagner to get in a few more workouts over the next nine days before they make their final decision: stay or go. John Beilein will be along to support them providing as much feedback as he can get from NBA teams. Here’s what the head coach told the Free Press about the process:

“I’m letting this all play out and I’ll have to do like a game, what am I going to do if they go zone, I’m going to do this,” Beilein said about his 2017-18 roster. “I’m not thinking too much about it, other than I want to see how they did this week. And I’m waiting to get more reports from the NBA teams. Some of the NBA teams will be really honest with me saying, ‘We really like him, we might take him’ or ‘We think he should go back to college.’ And I’ll give them that feedback when we’re all done.”