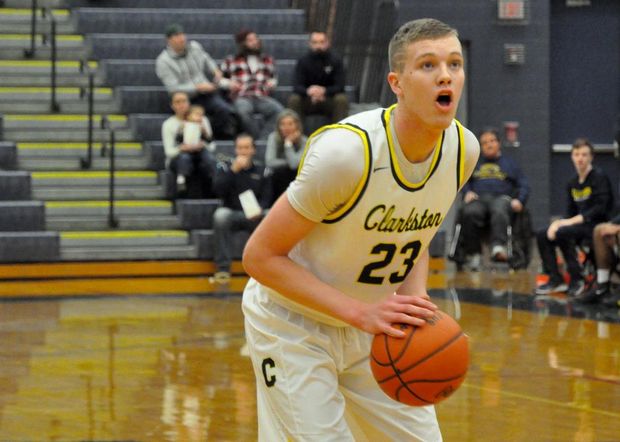 Transition has been a common theme over the past year of Taylor Currie’s life.

First, the 6’9” forward from the class of 2019 moved from Ohio to Michigan, enrolling at Clarkston High School.

Currie described that change as being rough at first and said it took him some time to get used to everything new. But his teammates stepped in and helped with that process, and eventually Currie settled into his new surroundings — and promptly became one of the main cogs of a team that won a state championship.

When he hit the AAU circuit this spring with his All-Ohio Red team, Currie had to deal with transition once again — this time with the absence of a couple key teammates from last year. And similar to his experience at Clarkston, it took some time — a couple tournaments, Currie says — to figure things out. Now, the team has gelled and sits at a record of 7-6.

“It’s been going well,” Currie said. “We’re really starting to come together as a team, starting to play well together. This weekend we made the Gold Bracket at the Nike EYBL in Atlanta, so it was a big step in the right direction for us.”

Currie himself has enjoyed several breakout performances thus far. In a game against The Family at the Spiece Run ‘n Slam, he tallied 33 points and 12 rebounds while displaying his outside shooting touch.

He’s seen his recruitment pick up as a result, with increased interest from Purdue and Iowa in addition to hearing constantly from three other Big Ten schools.

“Michigan, Michigan State and Wisconsin have all been coming after me pretty hard,” Currie told UM Hoops. “I really want to get a chance and visit all three in the next month or so. All three (are) great places, great coaches, great programs with great tradition.”

Though he grew up just north of Columbus, initially attending nearby Worthington Christian High School, Currie grew up in a Michigan household and as a fan of the program. Unlike many prospects at this stage, he has already been to Ann Arbor on a visit.

“I went up there to one of their camps (in eighth grade), and that was a really cool experience for me, getting to meet all the coaches and everything as a big Michigan kid,” Currie said. “They started to keep track (of me) a little bit my freshman year, and then it’s really picked up over my freshman year, last summer and end of this year.”

Head coach John Beilein and assistant coach Jeff Meyer — who Currie says he talks the most with — watched a couple of Currie’s games at an earlier Nike EYBL Session in Hampton. Currie says that Meyer came to one of Clarkston’s open gyms, as well, while Beilein attended the state championship game.

Their message to him has been simple: Michigan thinks Currie can be a floor-stretching big, similar to one of the current players on the roster.

Currie says discussions of a scholarship offer on June 15 have come up between him and the coaching staff, but he’s not too worried about his recruitment at the moment.

“We’re trying to win the Peach Jam this year, that’s our goal, so that’s my main focus right now,” Currie said. “I just think that if I keep playing my game and keep doing the things that I do and keep trying to get better, those (offers) will come at some point.”

Currie currently plans on attending Michigan’s Elite Camp and also hopes to make a second visit where he can sit down and spend more time with the coaches. He’ll take unofficials to other schools, as well, before narrowing things down to “three or four” teams after the July AAU circuit.

And from the looks of it, Michigan may be well-positioned to make that cut.

“Obviously (basketball-wise), just love their style of play. They like to get up and down, and that suits me. And then academics — it’s a great school, it’s a great place, and Ann Arbor is a great town. It’s just a great place.”