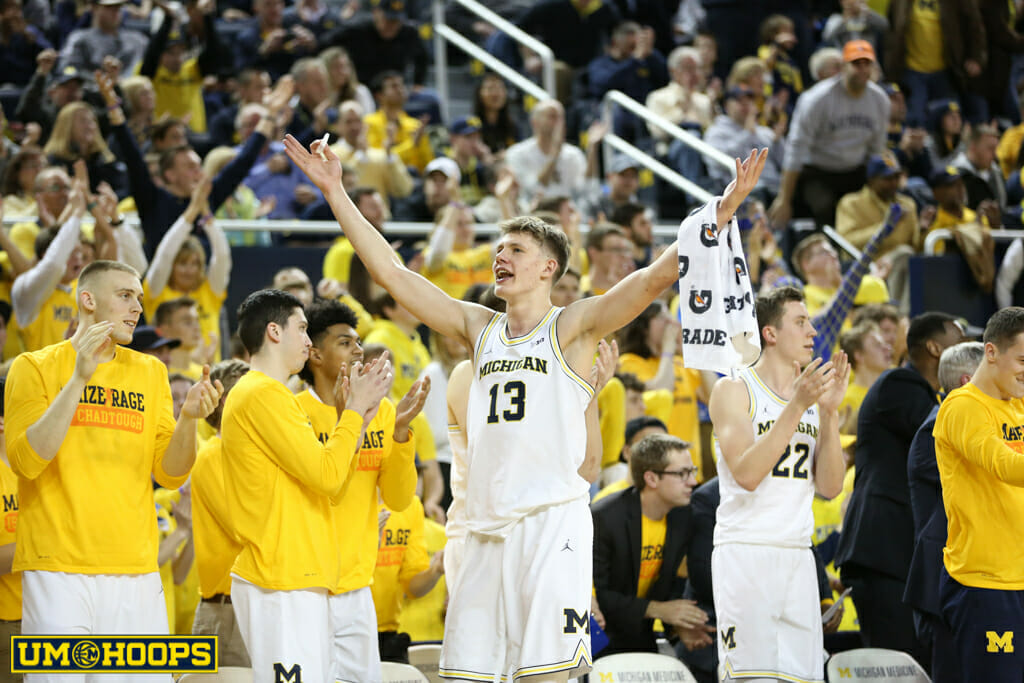 “Our numbers are extraordinary compared to other teams for a team that does not — we’re not depending all our success on one-and-dones,” Beilein said Friday. “Our success is depending on can we get good players who can develop going on the upside. Given that, our numbers right now are extraordinary. … Wisconsin’s had one guy go early since I’ve been here. Michigan State’s had two. (For us,) I’ve lost count.”

When DJ Wilson announced Wednesday that he would remain as an early entry in the NBA Draft, he became the eighth player to do so in John Beilein’s tenure at Michigan.

Time and time again, Beilein has faced the question of ‘what if.’ Had Wilson returned to Ann Arbor — like Moe Wagner — the two could’ve built on their breakout seasons, forming a deadly frontcourt for the Wolverines.

And in the near future, Michigan’s head man may find himself thinking about what could’ve been. But at this point, he’s used to it.

“Our numbers are extraordinary compared to other teams for a team that does not — we’re not depending all our success on one-and-dones,” Beilein said Friday. “Our success is depending on can we get good players who can develop going on the upside. Given that, our numbers right now are extraordinary. … Wisconsin’s had one guy go early since I’ve been here. Michigan State’s had two. (For us,) I’ve lost count.”

Compared to previous years, though, the process this time around was much more different. When the NBA decided last year to move the early-entry withdrawal to the end of May (just under two weeks after the Combine), it left players, NBA teams, and coaches — like Beilein — scrambling to understand how they fit in the new system.

Things are no longer black-and-white, with a player’s status clearly defined as either ‘in’ or ‘out.’

The situation presents an interesting conundrum for coaches, especially: how can they plan for next year’s roster without being certain of which of their players leave early or decide to come back?

“It’s very, very different because of the testing the waters aspect now,” Beilein explained. “We’re used to, alright, they’re either in or out, and then you go on and you recruit your next team. This is a different deal.”

For Beilein, part of the process meant serving as a “conduit to information” for both his players and NBA personnel. Because his players hadn’t signed agents (an action that would’ve meant the immediate loss of college eligibility), Beilein and assistant coach Saddi Washington served as the contacts for any NBA team interested in Wilson or Wagner. And according to Beilein, both him and Washington spoke with all 30 teams in the league.

“If we start all the way back to Manny Harris, Darius Morris, all those guys, we were just dealing with speculation, evaluation, reports,” Beilein said. “They weren’t actually going to workout and meet with pro teams. … I think the pro teams are used to working with guys (who) declared, there’s agents to work with and everybody’s doing their thing. We’re used to, alright, they’re either in or out, and then you go on and you recruit your next team. This is a different deal.”

That role went both ways, as well. Beilein and his staff gave both Wagner and Wilson as much information as possible to help the two make an informed decision — what Beilein called the “probabilities involved,” in addition to feedback from NBA teams and evaluators.

“Sometimes we may look at their reactions and have to maybe say, ‘Again, you do understand the probabilities here,’ ” Beilein said. “Then once we’re sure that they understand all the implications of a decision either way, then you’ve got to step back and embrace it. Because it’s not going to work if you’re forcing people either way, out or in. So we did that, and (we’re) really satisfied the way it all came out.

Beilein stayed in contact with Wilson throughout the process. The two parties spoke at the Combine — in which Wilson attended, but was limited physically due to an injury — and then once more after. On Monday, both Beilein and Washington flew out to talk with Wilson and his mom to ‘make sure, eye-to-eye, everybody understood everything.’ And with that, Wilson made his final decision.

Wagner, meanwhile, sat down with Beilein in his office earlier this week to announce his return — one that clearly has the head coach excited.

“All I know is going into it (is Moe) has the right attitude,” Beilein said. “Caris was in that situation, Glenn and Mitch were in this situation, I think Tim and Trey were all in this situation where they probably could’ve gone out, but they decided to remain at Michigan. I sense that same — probably even more — enthusiasm coming back from Moe right now.

“He wants to be more of a leader, he really values his experience here, he values the degree from Michigan, and coming from a different mindset, he could’ve gone pro right away. A lot of his peers that he plays with in Germany, they don’t go to the United States to play. So he’s got a real vision there. He’s young, and he’s been here two years and he just loves it here. And DJ did as well. They’re coming from two different situations, and DJ felt this was a good time to go.”

Beilein won’t know who will step up to replace Wilson at the ‘4’ until he has his team back together later this summer and in the early fall. But for now, he’s “really comfortable” with the options he has in Duncan Robinson and incoming freshman Isaiah Livers.

He admitted that after both Wilson and Wagner’s 2015 seasons that he didn’t anticipate there would be a possibility of both leaving early for the draft after only one more year. Now, he’ll have to deal with questions like how to replace Wilson’s defense and whether a two-big lineup like last year’s is still feasible.

He was still quick to say how excited he was about next year’s roster even after Wilson’s departure. After all, that is the type of uncertainty that John Beilein has become used to dealing with.

“There was a real possibility we could’ve lost both of them,” Beilein admitted.“I don’t expect anything to be for sure. You just keep going.

“It’s like when we went with the injury book. You didn’t have guys getting injured and then all of a sudden we got a bunch injured. You didn’t have guys going pro and now you have a bunch of guys with this opportunity. I just coach the same way. Fretful that things could happen, but confident that it always works out.”