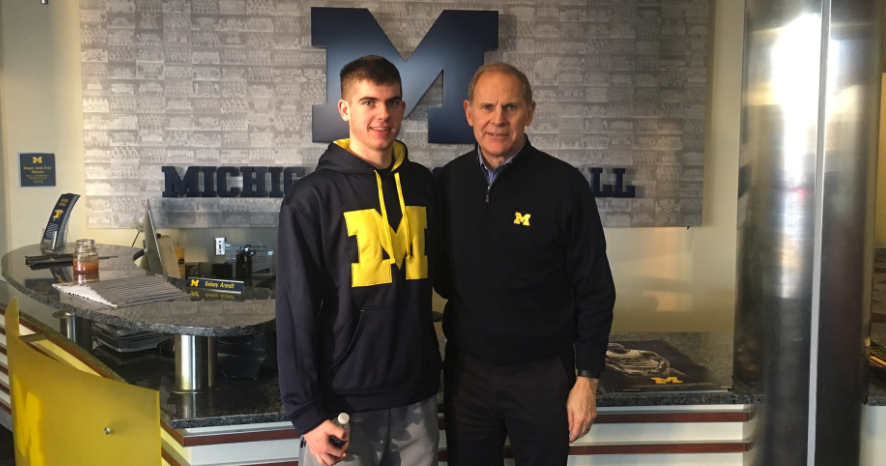 Joe Girard III is one of the best shooters in the 2019 class and his father played for John Beilein at LeMoyne.

In the case of the Girard family, the past has become the present.

Joe Girard Jr. played for John Beilein at LeMoyne College from 1990 through 1992 before Beilein moved onto Canisius, carving out a space in the school’s record books as a deadly three-point shooter. The two stayed in touch even after Girard left LeMoyne, talking every so often — that is, until Beilein started recruiting his former player’s son, Joe Girard III, and the NCAA’s rules came into play.

Girard, a 6’1” guard in the class of 2019, made his high school’s varsity team as an eighth-grader. A few high-scoring games later, his high school coach received a call from Beilein. Ever since then, Beilein has stayed in contact with Glens Falls’ coaching staff, keeping tabs on Girard.

“It definitely helps that my dad played for (Beilein),” Girard said. “It makes a lot easier to connect and communicate with him. He’s just a great guy and he’s just one of those guys who has helped a lot of people get to the NBA and developed a lot of people to reach their max potential. He’s just one of those people who knows how to coach the game, and it makes it a lot easier on the players.”

Girard — who listed interest from from Davidson, BYU, Fordham, Notre Dame, Saint John’s, Villanova, Louisville, UMass, Washington, Ohio State and Marquette — is plenty familiar with Michigan beyond his relationship with Beilein, which he described as “very good.”

Playing up at the 17U level of the Nike EYBL, Girard is averaging 10.4 points per game while shooting 45% (42-of-94) from three-point range this spring. He made seven 3-pointers in one game over the weekend at the Nike EYBL session in Los Angeles.

He’s been to Michigan twice, most recently on an unofficial visit last season for the Wolverines’ game against Nebraska.

“(The visit) was good. I really liked the place,” Girard said. “It was a great campus, it’s real easy to get around to all the classes and get to the gym whenever you need to. The facilities were one of the best in the whole country, you can tell.”

Contact between the two parties has stayed consistent throughout the spring, as well. Assistant coach Jeff Meyer paid a visit to Girard’s school last month to watch a workout, while Beilein, Meyer and assistant coach Billy Donlon have all seen Girard play on the AAU circuit already.

Girard hopes to make it back to Ann Arbor some time soon, although that may not take place this summer; he also plays football, and that schedule may come into conflict with potential visit and camp dates.

Regardless of when Girard returns to campus, it’s evident Michigan has caught his attention.

A potential scholarship offer? Well, that would certainly enthuse Girard, given his current impression of the program — and his dad, as well.

“He’s going to guide me, so he’d probably guide me a little bit towards Michigan, but he’ll also let me make my own decision,” Girard said. “But definitely with the connection he has with Coach Beilein, (that) would definitely help him give me a little more information about them.

“(An offer) would just be an honor. I’d be very blessed to get that, especially with the connection with my dad. If I eventually get to that point to where they would offer me, I’d just be ecstatic.”