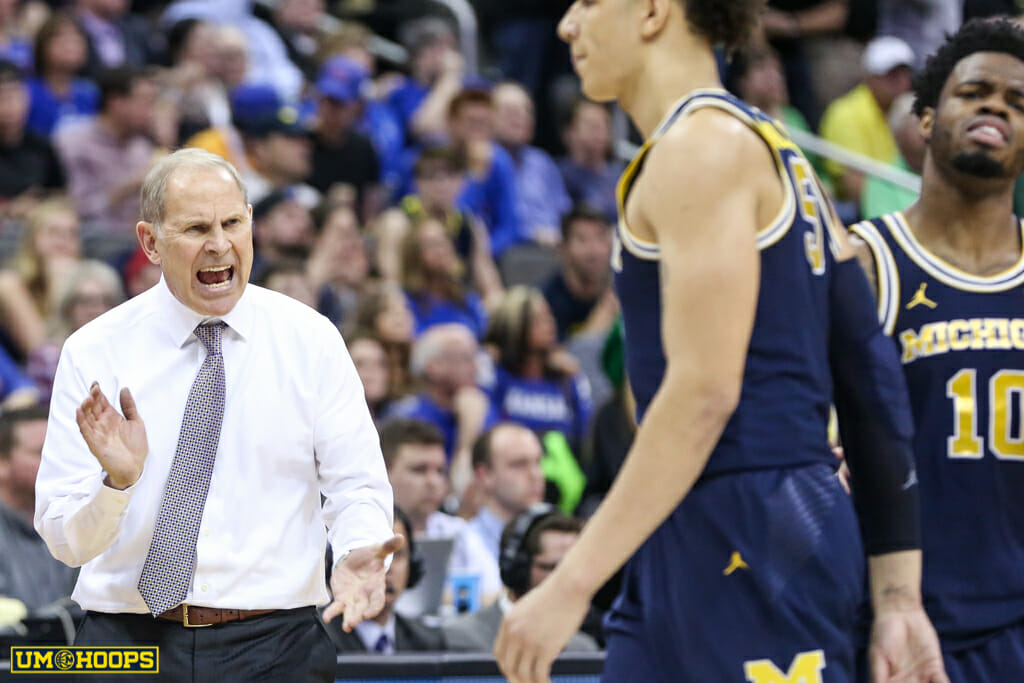 On professional opportunities for DJ Wilson:

“The kids are playing well, they are getting these other opportunities to play in the pros and you just have to continue to find other ways. You have to look at the situation, and never expect anything to be certain and always try to be prepared for anything that could come in front of you. But we’re happy for them all. It started with Trey Burke and Tim Hardaway in ’13 as sophomores and juniors, then the next year sophomores Glenn Robinson, Nik Stauskas and Mitch McGary. Caris LeVert did make it all four years, but basically because of an injury, and then DJ Wilson. It is something we didn’t plan on, at the same time we are happy for them.”

On being ahead of the curve with the three-point shot:

“There has never been a college player,. a big man, who could shoot like Kevin Pittsnoggle. He averaged 70 threes a year — for a big man — at 48% or something. He was really elite at that. Necessity is the mother of invention. It wasn’t going to be ‘okay, we’re just going to pound the ball into Pittsnogle’ or Mike Meeks was really good at Canisius for us and this past year Moe Wagner, DJ. You just are going to find a different way. If you have been coaching a long time you say there is more than one way to win, but you’ve gotta find it. Sometimes it works, sometimes it doesn’t. We were really playing well even before that run, we beat some really good teams decisively and it showed us we had promise. WE just couldn’t put it all together until February.”

What the next wave (as far as schematic trends) in college basketball?

“I don’t know if I’m that smart to get in front of that stuff. I do see the idea that people maybe picking up full court or even the soft press (because of the 30 second shot clock). … Right now I think switching every ball screen is a new way. That’s what helped us be really good in the end. Teams switched every ball screen and we just challenged Derrick Walton: ‘Derrick, they don’t think you can go by a 7-footer or shoot over a 7 footer. It’s time.’ People work on close-out drills all day, but anytime you’re in a long close-out, you’re in trouble. How do you get around that? You switch everything.”

“I don’t think so. They beat us fair and square in a game. I’m not going to go into their issues. We had a tough game. The breaks did not go our way, but we had some wins when the breaks went all our way. We’re not going to look back and ask for anything else. Our kids gave us everything they had and it led to the next year when we won the Big Ten championship.”

How do you handle narrative that players often look better at Michigan than they do in the NBA?

“I don’t know how I handle that. … The pros are too smart for that; they’re going to look through all that. The kids are so young to go to the NBA, I think it’s taken them time to adjust. It took Tim (Hardaway, Jr.) time to adjust and he’s playing really well. Caris LeVert stayed four years in college and watched it more; he was probably more equipped at that time. If people think that, that’s great, but I think the pro scouts are much too smart to be tricked by any system. It’s a pro system in many respects, but I think it’s the off-the-court culture that have been attractive to pro teams. When they interview guys they get the sense that this kid is not only a good player, he’ll be a good representative of their team.”

“Every time I do a tweet, it takes me about 20 minutes to do it. I don’t have the time. If it’s important, I do it. but I wont compete (with Jim Harbaugh).”

“Here’s what we try to predict in recruiting: Who has maximized and is where they should be, and who is still growing? During times in the year there were no questions in my mind (Wilson) could be a pro. Last 6, 7 games he was embracing contact really well. He’s just on his way to being a really good player. He can really shoot. Put it together with his defense … he’s 21 with a body of a 19-year-old. The best is yet to come for him. He’s a super kid on and off the court; very coachable. Whoever gets him is going to be very fortunate.”

“You inspired my team when you picked Oklahoma State. They had no chance once our guys saw your quote. … It was a great game. How can you stay in front of (Jawun) Evans? Brad (Underwoood) did a great job with those guys. I walked off court saying, ‘Damn, I hope I never play against one of his teams again.’ Two days later he’s in our league.”